Within the past few years I have succumbed to a period of feminist ennui. It’s not that I no longer think the principles of equality are no longer important, but it seems as if the word and movement, “feminism,” has lost meaning. It has been co-opted, lazily applied, and devalued. I’ve become frustrated by so-called feminists whose actions betray their rhetoric and popular culture texts and figures who think just saying words like “feminist” and “intersectional” is enough. Just the idea that there is such an idea of bare minimum – that feminism is as simple as wearing a t-shirt, watching the female reboot of Ghostbusters, or reposting a quote from Gloria Steinem on her birthday. This is not to say that those things are not important, but that there is a sense that these instances have become more like rituals – they are to be done to reassert a sense of identity, but have lost meaning.

The new essay collection, Can We All Be Feminists? addresses the complications and hardwork of being a feminist who is intersectional, meaning understanding the ways in which feminism can and does intersect with race, disability, immigration, labor, and sexuality (to name a handful). The range of essays, edited by June Eric-Udorie, covers a lot of ground and at times seems like nothing holds them together, until you come back to the anchoring point that feminism and feminists have to diversify their portfolios. To end sexism, examining immigration policies, as Wei Ming Kam does in “The Machinery of Disbelief,” is as necessary as Hollywood’s recent interest in wage equality. And within the rhetoric of equal pay activism, the continued reiteration that “women get paid less” must further be broken down by these other intersecting points: white women are typically paid less than their male counterparts, women of color are often paid less than that, and women with disabilities even less. “Women” cannot be an umbrella term and nor can “feminist.” We have to become more discerning.

Part of my own frustration derives from popular media’s frenzied approach to deciding feminism was something hip and marketable. As Jessa Crispin has so wonderfully (of course) outlined in her Why I’m Not a Feminist, their approval and cooptation of the term has sucked the life from the radicalist nature of the act. Crispin contends that anything that makes feminism seem safe and comfortable defeats the point. In essence, feminism is supposed to be uncomfortable, challenging, radical. In an interview with Brigid Delaney for The Guardian, she clarifies:

The primary problem I have with it is that is focused primarily on the individual – it’s your way of dealing with your own life. There’s very little sense of solidarity. You use feminism to ask for a raise at work, or negotiate your romantic relationships – but you don’t use it to negotiate the shared experience that minorities have or to renegotiate capitalism. There is less of an understanding of the big picture and more instead of how you are doing as an individual. It’s a very inward movement – and very individualistic.

Feminism, as it is now, seems to be more about just declaring “I’m a feminist” and saying something relatively vague about women being pretty ok.

Recently, I walked into a friend’s bathroom and did a double take of a GQ cover touting Chris Hemsworth as “Badass, Feminist Hero, and Super Dad.” The article didn’t really expand on his activist agenda. I saw nothing of his extensive writing or his attempt to form consciousness-raising meetings amongst his Marvel colleagues. Instead, it was remarked that he was good Dad and that he had claimed feminism and was supportive of Time’s Up. For GQ and others like HelloGiggle, Jezebel, and Bustle, this was enough. And that’s typically how it goes. For years, Taylor Swift and Katy Perry shifted around the feminist label until it gained popularity and then they began to vaguely reference women’s issues, while also appropriating black popular culture or just removing any semblance of blackness from Africa (Swift’s “Wildest Dreams” is unpacked by Afua Hirsch’s “Imperial Feminism” in the volume). Popular feminism advocates that we can feel empowered and we can be pro-women, but mainstream feminism put conditions on our activism. We can say we are pro-woman and we can attend marches, but when it comes to a sustainable action plan or anything remotely winking at radicalism, there’s an absence in the popular consciousness. Protocols and phone trees aren’t sexy enough to be sponsored by Dove or H&M. 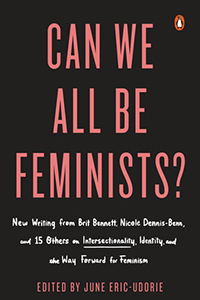 Can We All Be Feminists? by June Eric-Udorie

As if answering, Crispin’s pleas, Can We All Be Feminists illustrates the many ways in which feminism has failed. If Crispin’s work is a manifesto, this book is a literature review. In her introduction, Eric-Udorie contends,

The problem with mainstream feminism, again and again, is the frivolity of the issues it is concerned with: manspreading, girl power and female ‘empowerment,’ articles with headlines like CAN YOU BE A FEMINIST AND WEAR MAKEUP? As they fight these lesser battles, white women ignore the ways that their Black and brown, disabled, and trans sisters are still shackled by multiple forms of oppression.

Charlotte Shane in “No Wave Feminism” goes further to call mainstream feminism, sabotage feminism, or no-wave, which is defined by the author as leaving feminists “bereft of unity, momentum, and power, as we compete against each other to sit with men on the boards of companies with track records of unremitting mendacity.” While to feel empowered is important and consciousness raising remains a necessary enterprise, there has to be more.

Can We All Be Feminists? is a useful volume because it highlights the variety of issues that require further examination and advocacy. Carving spaces that are safer for fat, immigrant, Black and Brown, disabled, nonbinary, and deviant bodies are the central concerns of the authors. Effective are the ways in which the authors present the issues at hand, mainstream feminisms’ failures in addressing these issues (which for most includes not really thinking of them as feminist issues like immigration), and ways in which problems could be served by intersectional feminism.

bell hooks’s and Kimberlé Crenshaw’s names are constantly invoked as the central figures of defining (Crenshaw) and espousing intersectional feminism. The definition of feminism I adhere to (and imagine many of the writers within this volume do as well) is one hooks articulated in Feminist Theory: From Margin to Center and then again in her helpful primer Feminism is for Everybody. The definition hooks provides is, “feminism is a movement to end sexism, sexist exploitation, and oppression.” Simple enough. Despite its apparent ease, the definition demands a nuanced approach, which is where things become complicated when put into practice. It requires not taking texts or people at face value and instead asking probing questions and investigating contexts. It demands intersectionality, a more holistic approach to understanding the nature of identity.

If at the root of feminist work is the destruction of exploitation, then we must develop a plan to remove ourselves from companies that rely on exploited labor, that exploit natural resources. We need to challenge policies that restrict peoples’ agency and reinforce institutional racism, sexism, classism, ableism. Regarding how to accomplish these tall orders is a more difficult thing to do.

One of the things I most appreciate about Eric-Udorie’s collection is the ways in which the writers clarify the problems with mainstream feminism’s somewhat lazy sensibility, and the work that needs to be done to build a stronger network. It’s not enough to say words. There needs to be action. The thread tying these essays together is that of intersectionality, the idea that we are a collection of identities. That “women” as an umbrella term does not adequately capture the plethora of experiences and challenges experienced by people who identify as such. To fight for “women” is a nice thing, but so often it means fighting for a certain segment of women and their rights. The writers within the collection clarify the ways in which they and others are often neglected in these fights for equality. Trans women, for example, are still treated as outsiders. In Gabrielle Bellot’s essay, for example, she describes the disappointment she feels when major feminist public intellectuals like Chimamanda Ngozi Adichie discount the experience of trans women in understanding oppression. She expands, stating:

Living as a trans woman of color forced me to redraw my maps of the world, to redesign the topography of dreams and reality alike. It’s one thing to say you support women’s equality and liberation; it’s another to feel, experientially, where those desires for equality come from. I learned in other words, what it was like to be perceived as a woman in the world by being one, yet I knew I would still be barred, inexorably, from many “women’s” spaces simply by virtue of being the wrong kind of woman.

The terrain is complicated, but what Bellot emphasizes in this statement and what the other writers stress in their work is the significance of empathy coupled with action. It requires confronting your heroes and interrogating their words and actions. It’s not enough to accept somebody’s feminism at face value and accept that their feminism includes you. To end sexism requires a holistic perspective, a willingness to listen to others’ lived experiences, and an openness to supporting and forming alliances. To be frank, it’s not about you. Feminism is about everybody.

In theory, this shouldn’t be all that difficult, particularly among those who claim feminist titles. Bellot notes the blasé way in which Adichie handled criticism from the LGBTQ community regarding her statements about trans women not being “real” women. Imagine, the most famous feminist, Beyonce’s go-to, being called out. But more importantly, it’s to remember that there is no monolithic story to describe our lived experiences and we cannot rest all of our hopes and dreams on singular theorists.

One of the fundamental issues is that there are no rules. Feminism is a mode of thought that is only as good as the person interpreting. And it’s not required that we agree on those interpretations. There’s room for flexibility. There’s room for some of us to straight up not get along. Can We All Be Feminists? allows for a range of interpretations. Some of the essays contradict each other – whereas one suggests a dismantling of capitalism another recalls the joys of representation in popular media (which, for the most part, operates on a capitalist timeline). But another anchor to the book is that we’re all working through how to be better – how to be better people, more decent, more empathetic. Despite how challenging some of these essays were to read, by way of recognizing how little I was doing myself or how little I knew about topics like contemporary immigration policies, that process was important. Reading the accounts of others helped strengthen my resolve to be less comfortable. I need to be a better ally, a stronger advocate, a more decent person. And as much as I didn’t really need a primer to want all those things, I needed help understanding how. The thing about intersectional feminism is that it’s a feminism that asks for empathy, decency, and vulnerability. And I think that’s the least we could ask of ourselves and others: to be better. •