The opening of HBO’s Boardwalk Empire begins with a ship waiting in the middle of the night. It is dark, foggy, unsettling. Another boat approaches and they begin shifting boxes of whiskey from one ship to the other. A nameless character asks them to hurry, “I’m a sitting duck out here,” while another refers to the whiskey as “liquid gold.” The show about prohibition begins with the risks taken by rum and whiskey runners to import booze into the United States throughout the 1920s. Like other facets of popular culture that represent this period, the majority of show dwells on the criminality: the gangsters, the corrupt politicians, the members of law enforcement/IRS/Post Office that are attempting to hunt the “bad guys.” Scarface, Some Like it Hot, Robin and the 7 Hoods, The Untouchables, Lawless to Boardwalk Empire focus their efforts on the sordid, seedy, and sexy details of breaking the law. Hugh Ambrose’s posthumously published Liberated Spirits, takes a different tack.

Liberated Spirits also starts in the dark night, with a deal gone bad. A corrupt Seattle police lieutenant, Roy Olmstead, awaits to help illegally import Canadian whiskey, only to be caught up in a sting, which led to his dismissal from the force and a new permanent gig in bootlegging. This is the extent of Liberated Spirits’ foray into the saucy details. There is nothing particularly sexy about Liberated Spirits. That’s not to say that the same details that draw us to fictional crimes or true crime adaptations aren’t there in the book. There is crime, there is corruption, and there is political gameplay. Ambrose and his researcher, John Schuttler do not concern themselves with those dramas. Instead, they devote more attention to the negotiations two women made to promote and discredit Prohibition. Olmstead’s narrative serves only to highlight the struggles faced by those advocating and enforcing prohibition – it was impossible to maintain. Bootlegging proved to good of a deal to pass up, the conflicts between state and federal law enforcement over jurisdiction resulted in lack of oversight (and therefore lack of deterrence for criminals looking to import and distribute liquor), and growing cultural ennui toward the prohibition’s project.

Women’s organizations served as the foundation for temperance movements and advocates for prohibition. If women could accomplish the task of making the 18th Amendment (prohibition) a reality and the Volstead Act that was supposed to enforce it, politicians figured it might be necessary to pander to this burgeoning and powerful demographic. In some ways, women were courted for these positions, either as well respected and capable women who could be used as examples for how the government (state and federal) cared about women’s political plight (even if this was expressed solely through rhetoric). Liberated Spirits tells this period’s narrative through the lenses of two women. There is Mabel Walker Willebrandt, who became the second assistant attorney general under Hoover and Pauline Sabin, a socialite who moves from Prohibition’s fiercest advocates to its most adamant detractor.

United narratively over their relationship to prohibition, Sabin as an activist and Willebrandt as one of its enforcers, the real story appears to be their negotiation through a political system dominated by men and misogyny that dictated women needn’t bother in the political process. As Ambrose states, multiple times, women were getting shit done politically. Women’s groups had been one of the major advocates for prohibition and the 18th Amendment, which was ratified in January 1920. They gained the right to vote later that year. They also would help push Hollywood into a moral corner, which would eventually lead to the creation of the production code of the 1930s. Yet, (white and upper class) women were struggling to be recognized as more than just representative of special interests. Willebrandt was gunning for substantial changes. Pauline Sabin wanted to actively participate in the political process. But they struggled with prevailing attitudes that dictated they were less than capable or tokenism that encouraged limited participation before hitting the glass ceiling.

While the book’s subtitle indicates these two women fought against each other, as if in some Real Housewives dinner party, there is little indication they went to blows, even verbally through letters or mandates. They both chip away, however, on women’s roles, attempting to ingratiate themselves or lean in to the political machine. It’s difficult to say if either woman really “wins.” Willebrandt assumes that her service and work ethic will be rewarded with an appointment as Attorney General, a first for women. After all, she was assistant attorney general, she went to bat for candidate Herbert Hoover hard, doing substantive work on his campaign. Instead, she was asked to review applications for the position. Sabin worked within various women’s organizations and becomes a delegate for the Republican party’s conventions. Despite her ability to organize, mobilize, and spin convincing arguments, she still wasn’t given a great amount of respect – being considered a great example and token of the Republican Party’s recognition of women, but not example enough to trust with more significant political power. 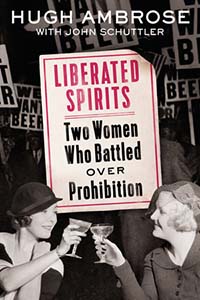 While moving back and forth between these two women who are adept at working the system, Ambrose and Schuttler incorporate narratives of those who play fast and loose with the system. While the authors couch their involvement in politics as earnest – they really are trying their best to do their best, play by the rules, and work for what they believe in – these other tales of rumrunners and law enforcement reveal the ways in which Willebrandt and Sabin’s optimism in the system is nearly naïve, according to the book, as if meritocracy was rewarded in politics.

The book links Sabin and Willebrandt’s roles in government to the larger picture of women’s progress in the early 20th century. Liberated Spirits reinforces the fervor of the time – of new rules, disagreement and disorder, and activism. Developing these women’s narratives of women working to enact change, stresses a narrative of women not defined by their personal relationships. Ambrose and Schuttler reference their marriages and children, but do not provide great deal in explaining “how they balanced it all” or “negotiated their parenthood” while engaging in politics’ webs.

There seems to be an assumption that feminism began in the 1970s. The utility of books like Liberated Spirits is the elaboration that women were attempting to carve themselves a space in the political space. And while in our contemporary moment it might be difficult to empathize with women so desperate to lean into the system as opposed to dismantle it, their stories were a reminder of the actual work it takes change. Activism and political work isn’t actually fun. It’s not all marches and sign making. It requires paperwork and investment in policy. It means constant compromise and dealing with colleagues who appreciate all the work you’re taking on, but close the gates when the opportunity to move up the ranks presents itself (LOOKING AT YOU, HOOVER).

“The struggle is real,” is a turn of phrase that has been overused and depoliticized as people have applied it to coming to work on Mondays, or brunch problems. But the struggle over being recognized and represented is real. We might feel alienated from the experiences of these two women who had some means, resources enough to gain entry into the boys’ club, but we can still recognize the frustrations and negotiations inherent in their attempts to be representatives for a more substantial cause. Regardless of their success to this regard, they no doubt helped expand the spaces allotted for women within State and Federal government as representatives, advocates, and employees. Yet, these are the same women, the women prod open or push the doors slightly ajar that regularly get written out of histories, because it isn’t enough. This is where a book like Liberated Spirits can be useful. To remind us of those microscopic histories and those narratives that so often get pushed aside for the Capones and Roosevelts.