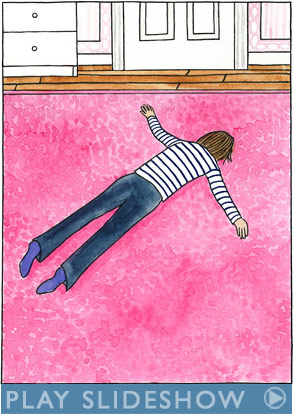 When I moved back to my parents’ home in Reading, Pennsylvania, I thought it would be a brief stopover. I had recently graduated from college and just returned from a year in Japan; I was hoping to live with my parents while I worked on a book. What started as a three-month visit grew into a 23-month extended stay.

This time at home was not, however, without its memorable moments. Highlights included celebrating my 24th birthday at a Hall & Oates concert with my mother; attending the Mid-Atlantic District Barbershop Chorus Championships in Wildwood, New Jersey, with my father; a variety of squirrel encounters; and wearing a chain mail belt of my own creation to my cousin’s Renaissance-themed wedding.

Daily life was filled with pleasant discoveries (noticing the train sounds from my bedroom for the first time, watching the moon from the roof) but tinged with the general embarrassment of having moved back in with my parents. After many months of awkward and rambling explanations about my return home, I was pleased when I hit upon the perfect response:  I’m…at a crossroads. Ambiguous and vaguely dramatic, this proved to end most lines of questioning almost immediately. And it was true.

Perhaps the biggest revelation now that I am — thankfully — no longer sleeping in my childhood bedroom is that I have continued to find myself at other crossroads, that, essentially, life is a series of crossroads. What I’ve come to see, however, is that time spent at the crossroads can be just as worthwhile as time on the road itself. • 25 April 2008