I don’t watch horror movies. Most of them involve demons, too much gore, and unrealistic stupidity that makes you think that the characters must have wanted to get murdered by the serial killer. I also don’t care for the trope of the black character (usually a man) dying first. But once your Twitter is being flooded with everyone talking about a film, it becomes something that you have to see. There was something about Get Out that seemed more complex and even more dangerous than the average man-in-mask-chasing-teens-through-woods kind of movie.

The first thing I noticed was how many people had packed themselves into the theater at eight o’clock on a Monday night to watch this movie. It made me feel better about my decision because at least we would be scared together. The film opens with a young black man walking down the street talking on his phone about how uncomfortable he is in an all-white suburb. “Honestly same,” was my only thought as everyone laughed at his phone conversation. A car then pulls up next to him, and he immediately starts walking in the other direction when a figure in a metal mask puts him in a chokehold and abducts him. The whole room gasped. Great start, already terrified! People I had never met were now my fellow audience members and detectives, both scared and curious. Like I said, I don’t intentionally subject myself to horror, so the whole time I was thinking, “Please, don’t be demons!” Then there is this music that makes you feel even more nervous and terrified. Turns out it’s a Swahili song, which sounds like something that would play right before someone would get possessed. “Please, don’t be demons.” This then fades into to Childish Gambino’s “Redbone,” which repeats the phrase “stay woke” in the background as the camera pans over main character Chris’s apartment and then to him. 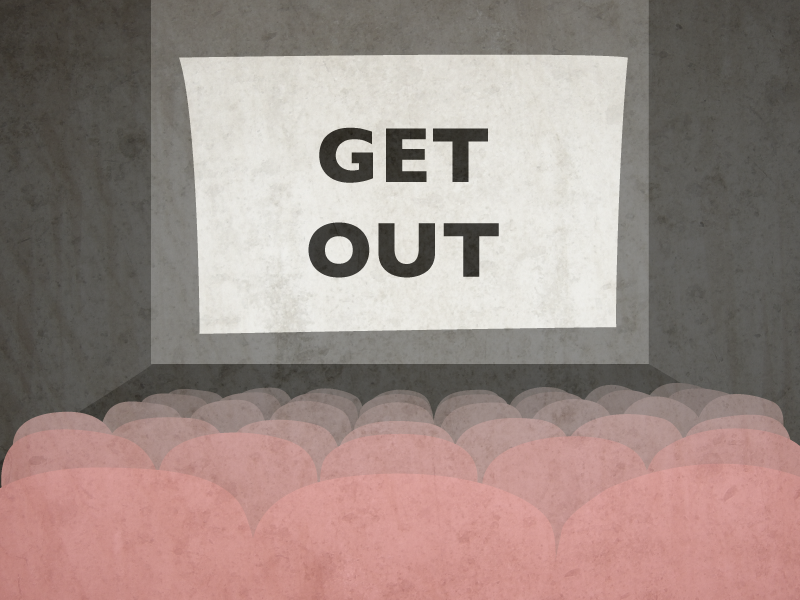 Now, I don’t know too much about horror movies, but I do know about the portrayals of stereotypical black men in movies. They’re always hyper-masculine, sex-driven, and entitled, but Chris is none of these things. His whole apartment is covered in prints of super artsy photos that he has taken. He has a small dog that is more hair than dog. He’s not the Birth of a Nation, King Kong, or The Perfect Guy type where you are constantly aware that he is dangerous. In fact, everything at the beginning of the movie signals that he is the one in danger. The film continuously counteracts these stereotypes by flipping them on their head and by showing you they still exist in the minds of many white people. This display constantly makes you hold your breath and brace yourself. You want Chris to survive, to be the step ahead that you are; you want to give him your anxiety and make him run. Maybe that’s why, in a room flooded with darkness, hearing everyone say, “Leave!” or laughing at Rod’s (Chris’s best friend) conspiracy theory made everything less scary. Even though we couldn’t see each other, we were thinking the same thing and all, passively, aiming for the same goal.

Throughout the film, there are many references to deer. The first jump scare of the movie is when Chris’s white girlfriend Rose hits a doe on their way to visit her parents. The loud and violent smashing sound sent the whole theater into a symphony of screams and gasping. While all of us caught our breath, Chris took a long, silent moment, staring at the animal in pain. “Something is wrong.” I thought. “The doe is going the wrong way.” She is running away from the woods and Rose’s family home and toward the city. The second time around, you see that the doe is a stand-in for Chris’s mother, who died in a car accident and bled to death by the side of the road. This is why Chris can’t leave while the animal is in pain; she is both a message of the danger that waits for him and a symbol of the trauma that he has held onto.

The connection between Chris, the dear, and blackness is only strengthened when Rose’s father, Dean, talks about how he hates the deer: There are too many of them, they take up space, and having one less is always good. This might seem benign, but guess what the stereotype for a hyper-sexual and aggressive black man is: a buck. Yup, a male deer, which later on in the movie Chris gets a lot of screen time to quietly compare himself to, showing that not only is this how Rose’s father sees him, but also that he is being hunted. Dean thinks it is up to him (and other white people) to control the population of the deer and in turn black people. He wants to get rid of as many as possible because they are taking up space and they are lesser than because they are animals. The whole movie revolves around the idea of hunter and hunted. Normally, a black man would be the hunter, his aim focused on a white woman, who would be the hunted. The idea is that to survive, the hunted must outwit the hunter or die. However, like everything else, the film turns this on its head.

Chris is the hunt, the game, and the spectacle; this can be seen during the annual party that Rose’s family has. Everyone in their suburb comes over and pokes and prods Chris. Some ask about his physical strength, what he likes to do, and about if the sex is better. It’s all eyes on Chris in the worst way as the hunters study their prey. Even the other black man at the party is paraded around the guests and turns as if on display like a deer head above a mantel. You might be thinking if a group of people are poking and prodding at you while asking inappropriate questions about your race you would just leave or correct them. But as the resounding sighs and groans that the audience made will tell you, this is a pretty everyday interaction. And then another stereotype that was turned on its head was the white female damsel. Rose, the sweet, loving, funny girlfriend is aptly named because when you think about a rose you think about beauty and femininity, but often people forget about the thorns. We are supposed to think that even if the rest of her family are horrible, racist murderers, she has to be exempt. Usually, the white woman is the person you are supposed to empathize with and fear for, but Rose turns out to be one of many villains. She is well aware of the danger she is luring Chris into, because she targeted him and used his fears and painful backstory to make him more vulnerable. She treats dating like a hunt, and she keeps souvenirs from all of her past relationships. However, Chris is no helpless, dumb buck. He is able to outwit those who have tried to kill him. He reverses the roles, becomes the hunter, not because he is naturally violent or because that’s the way all black men are, but because Rose and her family have created the thing that they fear. He has to fight back in order to survive, and when he does the whole theater went crazy! Everyone was screaming from excitement and rooting for Chris. This moment was cathartic because it doesn’t happen in real life. Can you think of a time when a group of people was excited and happy to see a black man acting violently or fighting against whiteness? Yeah, me either!

The film pushes us to be aware of all of the biases that we have and makes us question any expectations we might have. The film gives us an inside look at the ways that racism is alive and well and how everyone talks around it. It’s easy to say “I’m not racist” because you think that being black equates to being “hip,” “fun,” and “fashionable,” even when you hold hatred for a group of people. Many films turned black people into boogeymen and nightmares. It’s easy to watch the black boy die when you were scared of him. But this one shows the fear from a black person’s perspective. And honestly, it’s worth watching twice because you are going to miss things, like Dean saying that they can’t go into the basement because of black mold or the moment when he walks into the kitchen and says that they keep a piece of his mother in the room and Georgia is standing there. And there is nothing better than a theater full of people’s screams during the last scene. •