In May of 1894, a young anarchist named Emile Henry travelled from his small apartment in Montmartre to the fashionable boulevards near the Gare Saint-Lazare in Paris. Unemployed and angry, he entered the elegant Café Terminus with a bomb under his coat. Inside, he lit the fuse and threw the explosive into the middle of the café. It blasted through the conversations and drinks of the patrons, killing one and severely injuring nearly two dozen others. While Belle Époque Paris had experienced a number of anarchists’ bombings, this attack was unprecedented, as it targeted civilians and not the police or government officials. Henry was wrestled to the ground, quickly tried, and sentenced to the guillotine. According to historian Mary McAuliffe, author of Dawn of the Belle Époque, Henry was unapologetic about the bombing. When the judge reprimanded him for harming innocent people, Henry retorted, “There are no innocent bourgeois.”

There was another explosion in France that spring. It came in the form of dancer Jane Avril, whose nickname “Le Mélinite” (after a form of dynamite) was less about anarchism and more about the energetic and unique dancing the unfashionably thin Avril performed at the Moulin Rouge. The small but well-curated show “Toulouse-Lautrec and Jane Avril: Beyond the Moulin Rouge” at London’s Courtauld Gallery offers a new window on our often romanticized view of the Belle Époque and the iconic Moulin Rouge. While the red-headed Avril may conjure images of Nicole Kidman from the 2001 film Moulin Rouge, the similarities are slim. This Moulin Rouge is not about romance, but about the survival of an artist and dancer amidst the spectacle of bourgeois entertainment.

The show presents us first with Toulouse-Lautrec’s images of Avril in both painting and posters, revealing a public and private display of the dancer. The two met in the early 1890s when Avril was one of the new dancers at the Moulin Rouge. Part dance hall, part circus, the Montmartre venue with the fake red windmill featured the risqué stage performances of girls in tightly bodiced dresses and thickly draped skirts that would be hiked up in the energetic dances for patrons’ pleasures. It also hosted donkey races, acrobatic performances, exotic Turkish dancers, and Middle Eastern music. In the rear garden, a three-story replica of an elephant hosted dances inside its hollowed belly.

Toulouse-Lautrec’s attraction to the emerging venues of decadent entertainment of cabarets and dance halls rested in part on his own marginal status in Paris society. Born to an aristocratic family, Toulouse-Lautrec was deformed by two childhood injuries that left him quite small in stature. He was rejected often from the places his family and status should have welcomed him. Instead he turned his keen eye to the underworlds of Paris, making them the subject of his own unique art. Critics often used the artist’s deformities to demean his work. “Toulouse-Lautrec’s art is that of a man who suffered much through life and who found his revenge,” raged one critic of the era, who concluded, “One is painfully upset by the sight of all the ugliness glorified in his canvases that show characters borrowed, more often than not, from the dance-halls and back-street slums.” His paintings held an energetic modern aesthetic of flat surfaces and quick brushstrokes similar to those of contemporaries Van Gogh and Cezanne, which assured that the official art salons of Paris consistently rejected his works. His paintings were, for many, a sign of the very decay of France itself. As McAuliffe notes about the months after the Café Terminus bombing, “Hostility to the new seemed especially rife that spring in Paris, as the defenders of tradition — already shaken by the threat of political anarchy — took aim at what they regarded as cultural anarchy.” It was as if the Belle Époque’s own culture wars were modern art and the decadence of the Montmartre dance halls were the target of conservatives. It was in this atmosphere that the Dryfus Affair would anchor a nationalist, anti-Semite frenzy in the waning years of the century. 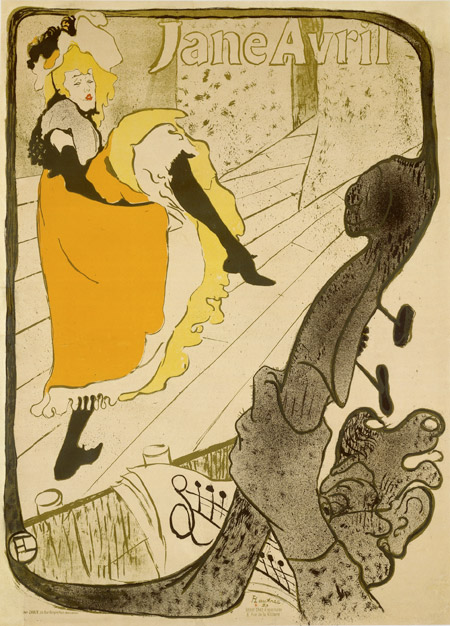 Here the dancer stands sideways at the upper left, her arm cast around her orange and yellow skirts and raised leg to reveal layers of petticoats and the shapely contours of a leg from knee to heel. On the bottom, the neck of a double bass, grasped by a shadowed musician, flows into the poster frame. We see the stage exit in a shadow just behind Avril’s name. But it is her face that compels and confuses, for it is difficult to discern her expression. She looks more pained than sad, more numb than happy.

Then I started to notice other faces with similarly despondent looks. Toulouse-Lautrec’s “At the Moulin Rouge” (1892-95) centers on the back of Avril’s head, distinctive in its red hair, sitting at a table with friends. Men in top hats and heavy coats surround her. And just to the edge of the frame, as if she moved to the right to be seen by the artist, is the haunting blue shadowed face of May Milton, a close friend of Avril who stares out at us with an expressionless look. While many of the images in the show look familiar, I was struck with how the faces of Toulouse-Lautrec’s dance hall denizens never look as sad as they do when brought together. 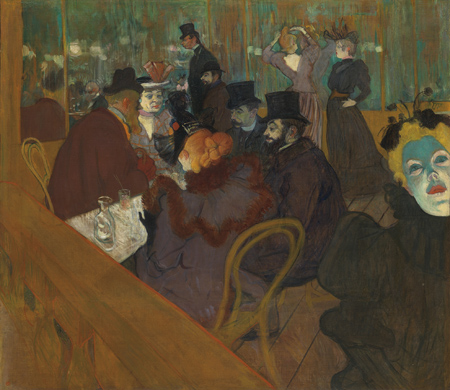 Eventually, these scenes of entertainment lose any feeling of joy or revelry, portraying instead a poignant melancholy. His “La Goulue at the Moulin Rouge” (1891-2), holds such sadness. Louise Weber, known as “La Goulue” (“The Glutton”) was the most famous of the Moulin dancers, and much more popular than Avril. Toulouse-Lautrec presents her in the center of the composition, her dress a mélange of blue, white, and gray streaks, her arms wrapped around her sister and her female lover. Toulouse-Lautrec draws our eye to Weber’s low V-neckline, which cuts away any sense of the period’s bourgeois decorum. But you also notice the face, with eyes that seem to be staring at and beyond viewers at the same moment. The painting asks us to look at Weber, who seems to care little to look at us.

An intimate portrait of Avril that Toulouse-Lautrec completed the same year has this same quality. Set outside the dance hall, the painting (above right) captures the dancer attired in a hugely plumed hat and a simple plum cloak tied high on the neck. The dark colors of the clothing and background frame the lightness of her face, which is thin and angular, her red lips almost the exact center of the painting. But she does not smile. As in the poster, her face confuses us in its imprecision. Toulouse-Lautrec’s images did much to promote Avril’s persona and status in the cabaret world, but it was often a persona of distance. A contemporary reflecting on the poster of Avril noted, “The facial expression is one of incredible sadness. One feels the weariness, one sees that the young woman dances for our pleasures and not for hers, one reads it as the poorly hidden desire to escape from this existence where the blasé public takes too much.” We see the exhaustion of this taking in “Jane Avril Leaving the Moulin Rouge” (1892), where Toulouse-Lautrec captures a downcast Avril dressed in streaks of plum and blue amidst the Paris street of yellow light. Her body can’t even cast a shadow. 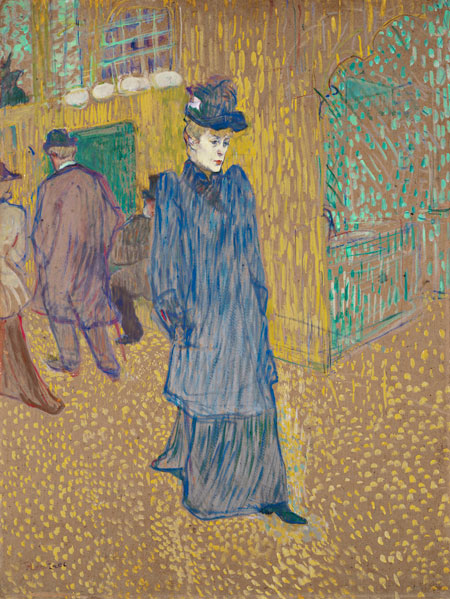 The show’s second room is a smaller, darker gallery focused on Avril’s life. In this way, the show feels as if it moves backstage. Avril’s early life was far different from Toulouse-Lautrec’s aristocratic upbringing. She was born Jeanne Beaudon to a courtesan in the Belleville section of Paris. As a child, she was abused at the hands of her mother; she ran away at the age of 13. Suffering from chorea, a disorder that causes uncontrollable and unexpected muscle contractions, she was eventually admitted to Salpêtrière Hospital, which specialized in the treatment of hysteria and nervous disorders in women. The hospital was known for housing prostitutes with extreme cases of venereal diseases. It also had a reputation for experimental treatments, including shock therapy, and for turning its patients into spectacles for public viewings and performances. The show documents well the work of the hospital and the ways that hysterical women become objects of public interest. It was at one of the hospitals annual balls, where the patients would dress up in costumes and perform for an audience of middle-class patrons, that Avril came to her ultimate vocation of dance. She would later call her stay at the hospital her “Eden.” After two years of treatment, which lessened the effects of her disorder, she left the hospital and soon began performing at the newly opened Moulin Rouge, exchanging the hospital stage for the dance halls of Montmartre.

The publicity photographs of Avril, dressed as various characters that project images of the coquettish girl or the well-attired lady, suggest the ways stage work provided her with a rich array of personas. Many of these photos emphasize her face and the contours of her thin, flexible body, a shape that contrasted with those of the more robust dancers, such at the well-fed Weber. In one novelization of Avril, she is described as having the “face and body of a child, but of a poor anemic child, fed haphazardly, thrown into life too soon. She would even have been ugly were it not for the strange charm of her two small green eyes, turned up on her temples in a Japanese style.” 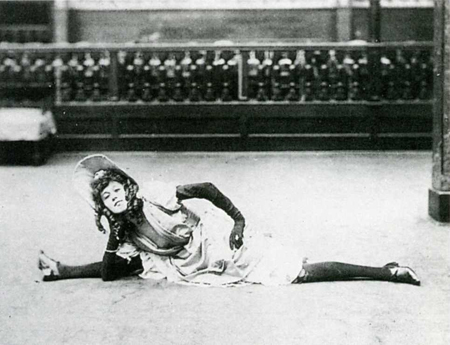 “Jane Avril at the Moulin Rouge”

Avril’s success on stage was built, in part, on the allure of her disorders and her exotic qualities. Her dancing would eventually inspire many writers; artists would celebrate her “epileptic choreography.” In an essay for the show’s catalog, curator Nancy Ireson notes that Avril’s strangeness was part of a larger cultural “curiosity in things beyond the realm of normal appearance and experience, a phenomenon also made manifest in the turn-of-the-century interest in other unconventional aesthetics, including child-art, non-Western art and the ‘primitive’ or insane.”

It was this marginal status that Avril and Toulouse-Lautrec shared and fed on within the norms of bourgeois respectability. While Toulouse-Lautrec succumbed to his alcoholism in 1901 before reaching the age of 40, Avril left the stage soon after his death, married, and lived a relatively quiet life until her death in 1943. What comes through in this show is how Avril’s dancing and Toulouse-Lautrec’s images, with those expressionless faces and an atmosphere of melancholy, were part of the cultural tensions of a period in which spectacles of the exotic fed the incendiary appetites of the bourgeois. From their marginal status, Toulouse-Lautrec and Avril produced a new aesthetic that disrupted the traditions and sensibilities of the day. As one contemporary critic wrote in reference to Avril’s nickname, “dynamite dances as it wants, no-one knows why; only, the effect of the woman is infinitely more graceful than that of the explosives!”  • 17 August 2011