“It is the assignment of the artist to destroy art and come closer to reality,” said Vienna Actionist artist Otto Muehl in the 1960s. Muehl and the Actionist were known for their aggressive performances that involved actors rolling on canvases covered in paint, public beatings and mutilations, and animal killings, all of which mixed blood-red paint (or blood itself) with other bodily fluids creating an unsettling miasma of performance art.

In The Art of Cruelty, Maggie Nelson reflects on these performances, seeing their anxious roots in Platonic dictates against mimesis, against theater’s power to imitate or represent, something the Greek philosopher feared would draw spectators away from the truth of life. “The anxiety over the relationship between art and life remains quite high,” writes Nelson, “the mandate to break down the barriers between them, acute.” This tension between the artifice and experience threads itself throughout the exhibition “A Bigger Splash: Painting After Performance,” tracking both a history and a legacy of artistic works that explore visual art’s theatrical moments. But there is another idea that is lurking in this show about the relationship between the camera and painting. From its origins, photography held its own potential for destroying painting towards a more truthful reality. For many artists in this show working in the last half of the 20th century, the camera holds its own vital importance not only to document artistic works, but also to give shape to them. As Susan Sontag famously showed us in the 1970s, the act of photographing is not simple an encounter between an event and a photographer. Rather “picture-taking is an event in itself.”

The first gallery sets the themes of this show with a work by Jackson Pollock and David Hockney. You encounter first a clip from Hans Namuth’s classic 1951 documentary about Pollock at work with a long, rectangular canvas spread on the ground before him, the scene illuminated in the morning light of Long Island. The grainy black and white loop plays silently on a flat screen monitor. I missed not having Pollock’s staccato voiceover describing his process, or the haunting tonal music that accompanies the film. Instead, this encounter is a quiet one watching Pollock’s hands shooting across the canvass, his body pent over the work, shifting in rhythmic movement, the paint swinging off his brush in small thick streams across the prone, flat canvas. Namuth’s film “was important to showing how the process was important to the painting” the wall text informs us, adding that Pollock’s generation of artists “redefined the canvas as an arena in which to act.”

Below the video screen, on a raised platform, lies the painting that Pollock was working on, “Summertime: No. 9A.” You have to get close to the platform to see it, bend your body a bit to get a better view. The painting rests there under glass like some preserved saint or dictator. Or perhaps one of those animals floating in formaldehyde that Damien Hirst so much loves. It was the first time I’d encountered a Pollock painting looking so dead, and I thought there was a certain cruelty to leaving that work lying there like that.

If Pollock’s gestures on film set the theme of artistic performance, Hockney’ “A Bigger Splash” (1967) gives us the show’s other concern: art as a kind of backdrop to experience. His painting, from which the show takes is name, hangs across the room from the repeating gestures of Pollock’s film performance. The canvas presents a low roofed Southern California house, orange and yellow, slicing across the contrasting marine blue sky, as two thin palm trees lingering on the right side. We look at this scene from a distance, standing near the diving board of the house’s pool in the foreground, the dense blue rectangle filling most of the canvas. And right in the center, unsettling the geometry of the painting, Hockney gives us the impression of the splash, the paint strokes fluttering and sparking with abstraction, suggesting something has just happened, someone has just jumped into the water. Near the painting, you encounter a clip of Jack Hazan’s documentary about Hockney from the early 1970s. But again there is no voiceover, only a short loop of images of Hockney painting in his studio in a much less staged way than Pollock’s keen awareness of himself in action.

The curator tells us that, unlike Pollock, Hockney was skillful at “conjuring artifice and illusion.” But it would be more accurate to say that both artists were skillful in such ways, particularly in front of the camera. What the show strangely ignores is the importance of the camera itself in both documenting and shaping the artistic performance. As these two videos underscore, the presence of the artist working in front of the camera has its own historical origins. In the early 20th century, Monet was famously filmed sitting at his easel in his garden painting water lilies and all but ignoring the camera nearby. But it would be a later generation that would use the camera in more self-conscious ways. Namuth’s film in particular turned Pollock’s gestures and body movements into a performance of visual interest. Such films and photographs point to the increasing distinction between painting and painting in front of the camera.

Take Yves Klein’s silent films of his 1950s public performances where he would invite well dressed Parisians into his studio to watch as naked young women (never men) plaster their bodies with Klein’s distinctive dark blue paint and press their bodies against the large canvas hanging on the wall. Off to the side tuxedoed musicians played, and Klein himself acted as a master of ceremonies. Or, Kang-so Lee’s “Documentation of Private Performance” (1977), a series of photographs that capture Lee painting his naked body in front of a white backdrop, and ending with his embrace of the canvas. In a similar fashion, Stuart Brisley’s “Moments of Decision/Indecision, Warsaw” (1975) captures in a series of photographs his naked encounter with paint, documenting the transformation in which his body and canvas become indistinguishable, both painted in near dark hues that blur the lines between artist and work.

And then there are the Vienne Actionist artists in the third gallery, their performances displayed in photographs and film stills. There weren’t any of the groups’ actual films. Perhaps they were too arresting for Tate Modern patrons. A particular series from Muehl and Günter Brus’ “Total Action: Ornament is a Crime / Material Action No. 26” (1966) present scenes from what looks like a basement theater space where actors wallow in paints and fluids upon a canvas spread on the floor. Like many performances here, their bodies become the artistic gestures against the canvas. This is not Pollock sweeping paint across the canvas, but rather a mingling of flesh and paint, canvas and sweat, in scenes that could either be orgy or massacre.

Nearby is Hermann Nitsch “53 Action” which shows a naked women prone on the floor (women don’t fair so well in the Actionists performances) as two men hold a headless animal carcass above her, dripping what I presume to be blood across her body. It is hard to grasp the experience of such performances in these still photographic representations. But, as the wall text notes, “In the 1960s much of this work was staged solely for the camera, often intended for publication, rather than for a live audience.” The camera became the audience, and the performance became a spectacle for the lens.

This transformation of camera for audience becomes particularly acute when considering works by women and queer artists in the 1970s. Take Cindy Sherman’s unique performative self-portraits. A series of photographs from 1976 presents nine images of similar lighting and composition with Sherman poised on a chair against a white wooden wall. But each photograph presents a different play of identity, different gender or ethnicity, as Sherman transforms her images and bodily gestures solely for the camera’s eye. Similarly, Urs Lüthi’s “Just another story about leaving” (1974) presents a series of self-portraits that slowly age with each image, offering a haunting but captivating comment on physical beauty and gender. Nearby there is a small, stark portrait of Andy Warhol in drag, his pale skin and blond hair blend into the harsh white background, contrasting with his deep red lips. Make-up becomes its own form of paint among these artists, as in Eleanor Antin’s video “Representational Painting” (1971) where Antin stares into a mirror just to the left of the camera and applies mascara with ritual precision. Such works, mostly from the 1970s, center the artist as the subject, merging canvas and artist into one for the sole interest of capturing on film. For these artists, the camera holds a vital place in their work as more than mere recording, but also as a cultural and artistic tool to question notions of identity.

The second half of the show features contemporary artists whose works those earlier artists influenced. But so many of these installations lack explicit threads from the earlier parts of the show leaving these galleries unanchored from the history behind them. One intriguing gallery featured Ei Arakawa’s videos of what he calls “painting actions” which involve the movement of canvases within a performance space. “A Single Night with Mad Garland” (2011-12) staged the movement of paintings circulating around the room held by dancers as they spring and run with each work tethered to a central anchor. No longer about the act of artistic gestures by the artist, these performances instead stage a interaction between dance and visual art, and organize it for both for an audience and the video camera alike. Arakawa is more curator and choreographer than performer. 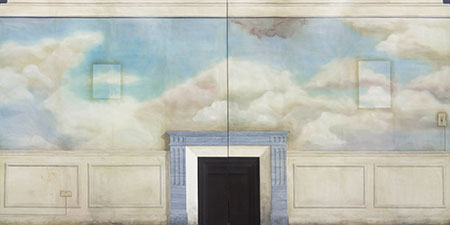 Perhaps the most surprising moment in this show comes in the last gallery with the room sized tromp l’oeil works of Lucy McKenzie entitled “Slender Means” (2010). These stage-like canvases depict the fading interiors of a pre-war townhouse in west London, the wallpaper features Constable-like cloud studies fading and pealing, and dirty shadows of picture frames outlined on the walls. The work is strangely powerful both in is simplicity and its recalling a centuries old craft. The art surrounds you as you become part of its illusion. These backdrops conjure your own possibility amidst the theatrical moment. For an exhibition so heavily anchored on works that present the artist at work, that turn the gestural moves or violent actions or bodily transformations into their own subject of art, McKenzie’s works oddly pushed the artist to the background, to the backstage if you will, and instead centered the viewer in the performance.

I had a strong urge to take a photograph of myself within McKenzie’s interiors, like those tourist who photograph themselves next to famous works of art. But unlike those vernacular images that are meant to document one’s place next to an iconic image, this photograph would merge into its own performance, as if you inhabited the painting, as if the spectators were merging with the art in a limited hyper-reality. Amidst these tromp l’oeil walls the line between the experiences of the gallery blurs with the theatricality of the canvas as a performance space. But as I held my camera phone in front of me, I heard the growl of the guard’s voice reminding me that photography was not allowed in this show. • 22 February 2013