Not that which is in the mind, but in which the mind is.
(Written in Greek on the dedication page of Everything and More by David Foster Wallace, translated by Morgan Meis)

In 1965, while waiting in a cafe, Roman Opalka decided to paint time. He didn’t paint the counters of time — clocks and watches and calendars and such. He didn’t paint people waiting for the bus or racing to the finish line. Roman Opalka painted time itself. He called this project, his life’s work, “OPALKA 1965 / 1 — ∞.” The title might be read as this: (Roman) Opalka (the artist begins in) 1965 (painting numbers from) one to infinity.

Having decided to paint time, the French-Polish conceptual artist went to his Warsaw studio and prepared a canvas. He sat before it. His hand trembled. He knew that once he started this immense project, he could never go back. Armed with a size 0 brush, and still shaking, Opalka painted in white a little “1” on the upper left-hand corner of a gray canvas. He then made his way horizontally across the canvas, number by number—2…3…4…5 — until he had a row of numbers, then two rows of numbers, then three. When Opalka ran out of room, when the last number was painted in the bottom right-hand corner, he stopped. Later, the artist made another painting, and another, each one picking up numerically where the last painting left off. He called the paintings “Details.” The canvas was always the same size: 196 centimeters by 135 centimeters. The numbers were always painted in white. When Opalka made a Detail, he recorded himself speaking the numbers as he painted. When a painting session was finished, Opalka would take a photograph of his face in front of his work, the numbers stopping when he did. Opalka devoted himself to this project alone, painting time. “All my work is a single thing,” he once wrote, “the description from number one to infinity.”

There is obsession in the Details. Opalka painted millions of numbers for more than 45 years, stroke by stroke, and took hundreds of self-portraits — same lighting, same position, same purpose. You would think that this formality would make Opalka’s paintings uniform, cold. But a single Detail is dizzying to behold. At first glance you can’t really see that you are looking at numbers. Because Opalka was committed to the hand-painted gesture, the digits are all uneven, both in size and weight. Before you can get a good look at the content, Opalka’s paintings feel as though they are moving around as the numbers get heavier and lighter, like the disappearing cloud of dust that follows the Roadrunner as he zips offscreen. 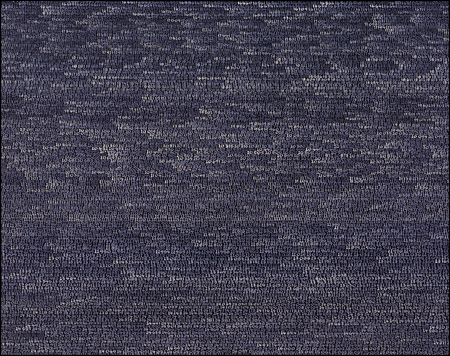 Roman Opalka painted time, and he painted it moving forward — 1, 2, 3, etc…. He could have painted time counting backward, and his project would have still moved in the direction of infinity. But even though Roman Opalka painted toward infinity, he wasn’t trying to paint infinity itself. Opalka painted time moving forward for one reason: death. “Time as we live it and as we create it embodies our progressive disappearance;” Opalka wrote, “we are at the same time alive and in the face of death — that is the mystery of all living beings.” Meaning, the very fact of our living is to embody our own disappearance. At first, the Details were painted on a dark background, the numbers in white. But in 1972, Opalka began lightening the background of each canvas by one percent. In 2008, the artist started painting white on white, calling the color blanc mérité (well-earned white). As the numbers he painted grew in size, as the canvases grew lighter, Opalka’s face — documented before a Detail at the end of each work session — grew lighter, too. His face lost structure, his hair grew whiter. In a symbolic way, to look at the Details is to watch Opalka die. Opalka’s concern with the infinite future, with death, is the great concern of us all. Which is why the infinity in front of one’s life looms much larger than the infinity behind, for Opalka and for all of us. We are mostly beings toward death, disappearing with each breath in the face of a progression of time that is utterly indifferent to us.

All of this makes Opalka’s work sound mortifyingly bleak. Only a person this simultaneously Polish and French, you are thinking, could concoct for himself such a godforsaken, death-obsessed gesamtkunstwerk. To be clear, when Opalka began “OPALKA 1965 / 1 — ∞,” he wasn’t interested in the mystical or “esoteric” aspect of numbers. “I wanted to be as rational a painter as I possibly could,” he wrote. Opalka wanted the act of painting numbers to be as methodical as possible, to weave it into his daily practice as completely as eating or sleeping. But something happened to Opalka as he continued his project over the years; he “chanced upon a mysterious potential in the logic of numbers.” Namely, he stopped thinking about the slow, bleak, methodical progression of time and realized that, as he painted, he felt himself to be inside a continuum of time, “the dynamic unity of a spacetime structure.” Time, as he painted, was not just moving forward but all around him. And as it did, Opalka realized that painting time wasn’t just documenting his life; it was his life. Speaking in a television interview for France 3 in 1994, Opalka said:

I took my body, my length, my existence as I have often said, as a sort of pictorial sacrifice and the essence, the embodiment of this procedure, creates a work much the same as we all create works with our lives. Every time that I add a number, everything changes. It is a sort of journey, if you will, where the steps are conscious each and every time, each step adds to the others, the weight of the duration of all these steps that you have lived. I even use death as a tool for a work. To finish, in order to complete a work, I use death as a tool.

In the sentence “Roman Opalka painted time,” the word “painted” is just as important as “time.” Opalka was an artist, after all. He felt that it wasn’t enough to just think about time, he had to create something out of it, “define” it. Opalka painted time slouching toward infinity, but what he painted was the condition of finitude. Opalka knew that, even as beings toward death, what we are really obsessed with is not death, but life. It is living with the knowledge of death, which always happens in the future, that makes it hard to experience our lives as something happening in the present. We are always looking toward this most future of future events. Possessing both the knowledge that we are alive and the knowledge that we will die somehow can make us feel part dead. But Roman Opalka thought that if you really got in there with time, got down and dirty, you could experience living in the moment. I would guess that, as Opalka painted time, he forgot about infinity. He just painted. And painted and painted and painted. And so, what looks like a project about man’s disappearance in the face of time became, as well, the expression of a life as it was lived. “All my work is a single thing, the description from one to infinity,” Roman Opalka said. “A single thing, a single life.”

There is joy in Opalka’s work, and, dare I say, optimism. Roman Opalka made time into his own time. As he painted, Opalka was able to feel, as much as any individual probably can, that he was living inside of time, rather than merely looking to the future, to what would happen tomorrow, or when he died, or after he died. It’s a bit of a cliché that all artists are obsessed with impermanence, that they create with the goal that their art will outlive them. But imagining the future of his art was not what interested Opalka, which is why he created an endless artwork. What mattered most to Opalka was that he paint time TODAY, that he create TODAY, that he live today. Painting infinity kept Opalka alive now. Opalka knew that, in painting time so diligently, so methodically, for decades, he had sacrificed a part of himself to it. But in embracing time, rather than fighting it, or ignoring it, Opalka was able to use his own life, and the knowledge of his own death, as a tool for creation.

In his book on infinity, Everything and More, David Foster Wallace discussed the weirdness of concepts, of the human mind’s ability to “conceive of things that we cannot, strictly speaking, conceive of.” Omnipotence was a good example of this. As soon as any schoolboy learns the concept of omnipotence, Wallace wrote, he immediately starts asking questions like, “Can an omnipotent being make something too heavy for him to lift?” There is a serious rift, Wallace was saying, between what we experience (really powerful guy) and what we can conceive of (all-powerful guy). And there are few occasions when this rift is more apparent than when we think about infinity and our place within it. We ‘know’ that we will die and yet being dead is something we can never experience. Opalka’s art was partly an attempt to bridge this gap between what we can conceive about time, and our actual experience living in time. To say that Roman Opalka was a conceptual artist shouldn’t diminish either the accessibility or the emotion in his work, nor should it make his work feel pessimistic. Consciousness of time is the mystery of life, Opalka wrote. Realizing this can be a source of joy for the single reason that it is universally shared. “This essence of reality…is not only mine but can be commonly shared in our unus mundus.” Just that we can conceive of something bigger than ourselves, and that it includes our individual existence — well, Opalka thought, it’s a beautiful thing. It’s what makes us human.

In artist statements and gallery brochures, “OPALKA 1965 / 1 — ∞” is usually described as a work that would be completed only when the artist died. But if you take the title seriously, “OPALKA 1965 / 1 — ∞” can also be thought of as an artwork that is never done, that conceptually can never be done, and therefore can never die, even in the event of Opalka’s death. “OPALKA 1965 / 1 — ∞” cannot die simply because the numbers Opalka was painting can never end. It’s pretty brilliant. Theoretically, what’s to prevent the Details from being picked up and continued by another artist, and another, and another, ad infinitum? With each new artist, the Details could continue their creep toward infinity. And yet, of course, with each new artist, the Details would change — the gestures would be different, the faces, the colors even. It’s a slap in the face to our notions of individual artistic genius to suggest such a thing, but I happen to think that continuing the Details after Opalka’s death would be a tribute to its most profound message — the boundlessness of creation. In consciousness, we understand concepts. In experience, we embody concepts. But creation is likely the best remedy to the gaping incomprehensibleness of infinity, because it is creation that inhabits the space between experience and understanding. It is in creation where the infinite and the finite can feel momentarily resolved. When we are creating — creating art or babies or laws or whatever — we are, as best we can, inhabiting finitude. When we create we can feel whole, present. We can inhabit the unus mundus , and forget death for maybe, mercifully, an instant.