My friend Bob took me into his basement the other day to have a look at his hobby.  This was not a stamp or coin collection; there was no woodshop, pool table, recording studio, or S&M chamber, for that matter. Instead, the room was taken over from one end to the other by a model train village. Bob had worked on this village with his now-adult children since they were very young, and the hobby stretched back even further to his own childhood, when he acquired his first train set. What lay before me was thus a kind of embodied landscape for my friend’s development into the person he is today. There were the old trains and the newer ones, there was city hall (the city named after his daughter), the county seat (named after his son), his parents’ pizzeria, his wife’s dress shop. He could tell me when and where he had bought this or that piece in the ensemble, down to the tiny street lamp and the mini-barricade. It was a cornucopia of deep history, and it was — let’s face it — a little weird.

The idea of a childhood pastime prolonged into adulthood should not really seem strange. One could postulate that all adult enjoyment is an elaboration of childhood play, just as all love, as Freud maintained, is the repetition of an initial love object. Sports, for example, is one area in which childhood pastimes are carried on with impunity if not fanfare — just look at the reverence and money bestowed upon professional athletes for continuing to do what they did on the elementary school playground. I know few grown men who wouldn’t trade their successful careers for the chance to throw around a ball for the remainder of their adult lives.

But other childhood pastimes prolonged into adulthood can give us pause. One critic has postulated that serial killers resemble immature collectors who have outgrown the collectibles of childhood. And such activities as hoarding and fetishism certainly suggest that those who engage in them are psychically stuck at around 6 years old.

Most regression, however, is benign and, indeed, given that it is self-consciousness, seems more aesthetic than pathological. Take Carrie Stettheimer’s dollhouse, for example. Stettheimer, both of whose sisters were artists of a more conventional variety, spent her life working on this dollhouse — making the tiny furniture and window coverings, designing the wallpaper and acquiring miniature paintings from famous friends to put on the walls (among the most notable: a miniature replica by Marcel Duchamp of his “Nude Descending the Staircase”). The dollhouse became Stettheimer’s masterpiece, and it is now on display, to a wondering throng, at the Museum of the City of New York.

A similar if more oddly inflected example of a regressive aesthetic is Charles LeDray’s “workworkworkworkwork,” just ending its run at the Whitney Museum. The exhibition features a collection of doll-size jackets and ties, vests and hats — an entire wardrobe for the midget preppy. The exhibit also includes shelves of miniature ceramic pots, plates, cups, and saucers, as well as more intricate apparatus, carved, as the curator blandly inform us, out of human bone. These artifacts might suggest that the artist is teetering on the verge of lunacy, but, then as noted, this is how art works: It embraces regression and places it under control. 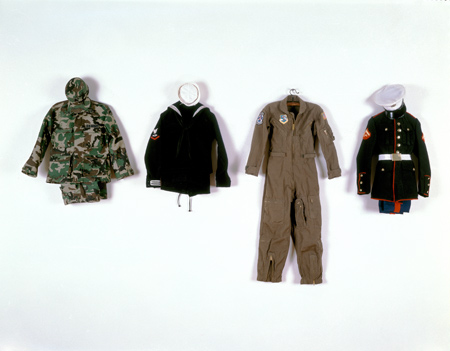 The aesthetic impulse appears to be at work in Bob’s model train village, which partakes self-consciously of two fundamental components associated with childhood play: collecting objects and manipulating them in an imaginative landscape. Collecting involves trying to fill a space, to make complete what is, forever, incomplete. It is at once repetitive and active, and thus both familiar and expansive. The manipulative aspect is connected to the miniature nature of the landscape, where the drive is to arrange and make sense of things which in reality are more complicated and out of reach. Both the collecting and manipulation of objects are central to all art, which depends on the accumulation of materials (even if they are only words) and their arrangement according to an imaginative design. Theorists from Benjamin to Baudrillard have addressed this idea.

But along with these attributes, the model train village is also a spectacle. The trains run, their lights blink, they make sounds and in some cases smoke as they move across the fabricated landscape. It is, admittedly, a modest and controlled spectacle, but it engages all the senses, and for all that it is prescribed in its route it still creates a feeling of surprise and upheaval, even as it brings everything back to where it started.

Moreover, for all that the trains exist in reassuring miniature, the landscape is complex. The trains’ circuitous journeys highlight this fact and distinguish the model train village from the domestic cocoon of the Stettheimer dollhouse or the cuddly (if unsettling) LeDray jackets and ties. This is a world of exteriors and of open space — a boy’s fantasy of expansiveness. Since the railway had its beginnings with the Industrial Revolution, when the ideology of separate gender spheres reached its apotheosis, one can see that the dollhouse, insofar as it defines the enclosed parameters of a conventional female space, found its complement in the model train, which defined the wide-ranging and dynamic parameters of a male space. At a time of burgeoning industrialization, model trains must have given boys — and their adult counterparts — an imaginative mastery over a threatening new technology.

One can also see how the model train village prepared the way for the emergence of motion pictures, where a certain kind of dynamic spectacle was incorporated more realistically and on a grander scale. The difference remains, of course, that model trains offer a kind of play that movies don’t. For one thing, they are interactive (in this respect, video games, more than movies, may be their usurper). For another, they are predicated on a disparity of scale, thereby supplying a degree of God-like control to users that movies can’t offer (or at least not in the same way).

By the same token, the element of scale, which seems so dramatically different when one compares models and movies is not always as formidable as one might think.  Bob demonstrated this by telling me to squat down and look at his village at eye level. The result was to diminish the sense of my real proportions and bring me into the miniature world. This eye-line match, which movies count on to draw us in, is surprisingly effective when achieved in this primitive way. Anyone working for hours on a model train village must become, I imagine, adept at the adjustment, so that simply entering the room where the model village has been laid out results in an accommodation — or rather, an automatic shifting back and forth between the role of giant overseer and Lilliputian inhabitant. This is a dualism akin to what movies engender — of being both outside and safe from the action, and inside, participating in it — but the shifts are more conscious and deliberate in the model world.

In her book On Longing, Susan Stewart addresses the semiotic ideas that attach to the miniature and the gigantic. She associates the miniature with interior space and the gigantic with exterior space, specifically, cityscape and technological power. The model train village, in some sense, bridges outer and inner worlds. It is connected to childhood, as noted, but it also, by virtue of its moving parts, has a life of its own. It is enclosed but it represents outdoor space — a vast and variegated terrain. It is regressive but it also encompasses real history in having to be built over time. And though it is on a miniature scale, it is also real — it takes up space in a material sense. Of course, this may also make it seem more emphatically regressive. “I don’t usually play down here alone,” Bob assures me — which of course suggests that he’d like to, if only he didn’t have to do all the grown-up things that go on upstairs.

It is interesting to consider that model trains are disappearing as a popular pastime.  On the Internet, there are still many sites devoted to them, but one discerns a strain of wistfulness. As one blogger put it, you no longer see that once-ubiquitous image of the model train circling the Christmas tree. The image seems archaic, not (as childhood pastimes tend to seem) nostalgic. It has passed into history — not personal history but cultural history. If the engine was the bulwark of power of late 19th- and 20th-century society, the computer chip is the bulwark of power of our society today. Interactivity on the computer is very different from interactivity with a model train village, and it is likely that kids can’t relate to the model anymore; they don’t get the enticements and threats associated with moving through a concrete landscape, albeit a miniature one. This signals a paradigm shift of an important kind. The self, far from being represented in dollhouses and model trains, must find its correlative in other things, and regression must now take a new form. • 7 February 2011