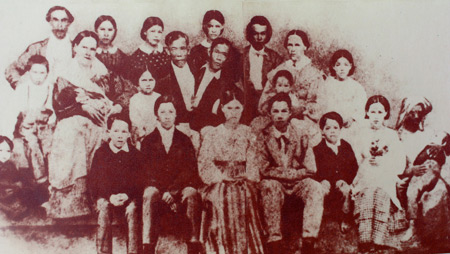 Philadelphia’s Mütter Museum makes visitors feel vaguely uncomfortable. An enormous wall of human skulls greets you as you walk in, each with a note listing the name of the skull’s owner and the details of his death. Advertized as a museum of medical oddities, the Mütter freaks you out because medical oddities are, well, freaky.

I visited the museum on a beautiful April day, feeling anything but satisfied. I hated to start a trip to a museum with a decidedly bad attitude but my past trip to the Mütter hadn’t gone so well. Its Chang and Eng display contains a body cast of the twins’ dead bodies that even outlines their final grimacing faces; a thick glass container full of preserving liquid holds their fused, double liver.

Great-great-great is a pretty distant relation, but I am able to follow my line of relatives back that far. During my last visit to the Mütter, I could only think that I was staring at my grandmother’s great-grandfather’s liver, a pseudo autopsy, and I became disturbed. That liver contained DNA that made me, right? I felt as if I was looking at a prototype for myself. When someone else walked up to the display, I found it necessary to enlighten them about whom, exactly, they were standing next to — a real, live descendant of Eng. When another visitor said, “Whoa…” as he approached the display, I told him, “I’m a direct descendent!” and emphatically gestured toward the display. I thought I’d done him a favor — wasn’t I making his visit way more interesting? Apparently not. He, and everyone else who had heard my outburst, looked skeptical and didn’t respond, so I awkwardly walked away and cut my visit short.

This time, I was determined not to embarrass myself. I assumed I’d be a little more prepared for the shock of the exhibit (which is supposed to shock you, like everything else in the museum), simply because I’d seen it before. I was wrong.

The Chang and Eng display is on the museum’s lower floor, but you can see it from a stairway that descends from the upper level. Almost immediately after walking in I could see the display below me and I began to get oddly nervous. A small group of people was already gathered around the body cast. I didn’t want to see it with all of those other people but I also wanted to hear their comments about it. I didn’t want to end up telling everyone that I was a direct descendant but felt that if I didn’t, I’d betray my heritage.

But instead of confronting my worries, I bought some time by walking through a still life art display and looking at stuffed animals that had been ripped apart and had plastic organs grotesquely sewn in. “Why are Eng and Chang in a museum with this crap?” I thought. “They should be in an American history museum.” After all, Chang and Eng embody the American Dream perfectly. They came to America with nothing except a pet boa constrictor that was mysteriously lost at sea. Poor foreign farm boys from Siam, they transformed themselves into artists and businessmen. They gained notoriety and success in America without sacrificing their morals or doing anything that made them feel disrespected.

Yes, Chang and Eng gained fame and success because they were conjoined, but they were not freaks. They refused to be billed as freaks. They abandoned promise of money and even greater fame by leaving P.T. Barnum’s circus because he wanted to add them to his freak show. Sure, they themselves may have exploited their condition, billing themselves as “The Double Boys,” but that’s still a far cry from “freak,” which suggests someone to be feared, someone disgusting, someone who is inherently abnormal in every aspect of their lives. Maybe I’m overthinking what “freak” implies, but at the very least “freak” is an insult.

When I saw the group had left the Chang and Eng display, I made my way down. Staring into the dead faces of my ancestors, I began to feel uncomfortable again. I avoided the body cast and focused on the information provided with the display. Since my last visit, the museum had added a cell phone tour, so I called in to listen to a brief outline of my family’s story. Chang and Eng came from Siam, became acrobats, toured the United States and Europe, married two sisters, fathered 21 children between them and, most important, had very different personalities.

I get that they had very different personalities. Sets of twins, fraternal or identical, always love to go on and on about their completely different identities. When you’re dealing with two different people I feel that it’s pretty unnecessary to establish that they are, in fact, two different people, even if they’re conjoined. The museum loves to play up the fact, though, that Eng was quite and calm while Chang was an angry drunken bastard. When other people do this, I feel annoyed. I forget the fact that when I tell someone about the twins, I always make sure to add, “I’m a descendant of Eng not Chang. Chang was an alcoholic.”

Near the display, I heard a volunteer tour guide start telling visitors a story I was familiar with.

“Chang was a more violent twin,” he said. “He once punched someone and was almost taken to jail for assault. Finally, though, the judge decided that they could not put Chang in jail because Eng was an innocent man.”

Once his group dispersed, I went over to the guide.

“You know some of the more interesting stories about Eng and Chang,” I told him.

“I know a little bit about them,” he said.

“I’m a direct descendant of Eng,” I said, so quietly that I had to repeat myself.

The guide became excited. He asked me if I had told any of the museum staff and I mentioned that I had the last time I came, but no one seemed to be too interested. For a few moments, he quietly contemplated the display with me, but then things started to get awkward. Outside the museum, people couldn’t be more fascinated about my heritage; inside, no one ever knows quite what to say. It’s hard to be impressed with my tie to Chang and Eng when you’re staring at the their grimacing faces and preserved liver.

After the volunteer awkwardly walked away to enlighten some other visitors at other displays, an obnoxiously skinny girl and her hunky bro-dude boyfriend walked up to the display. The girl decided that I had been standing there too long and shoved me out of her way. The girl began to read the exhibit information and suddenly her jaw dropped.

I found this so insulting that I almost fell over again, without the girl shoving me. I wanted to shout, “You know, I wouldn’t even exist if they hadn’t had children! My mother wouldn’t exist! My family wouldn’t exist!” But I’m finished with public outbursts at the Mütter Museum, and I didn’t say anything. Instead I walked away still shouting at her in my head. “What is so gross about that? Is it just too many children to comprehend? Does procreation in general gross you out? I don’t get it!”

As I walked away, I heard the volunteer tour guide I talked to earlier explaining scoliosis to some visitors. The Mütter also has a large collection of curving spines that look like my spine did before I had spinal fusion surgery at age 14. I noticed one woman start to rub her own back as she looked at the display of spines and skeletons. I have a personal connection to this exhibit, as well: Chang and I both had scoliosis. By the time the volunteer moved on to another display and began to explain something about epilepsy — another condition I struggle with — I had already started heading for the gift shop.

The Mütter Museum is not a good place for me, and by that I mean I fit in disturbingly well. The museum makes me feel insecure about my family and myself. I can’t help but feel that if my mother visited the museum, she would make Eng and Chang proud. She would unashamedly tell every visitor she met at the display that she was a descendant and then she would say why she didn’t like the display. I can barely verbalize what I don’t like about the display. Mostly it just makes me feel a little bit sick but I don’t even entirely understand why that is either.

In the gift shop, I contemplated buying one of the ink prints depicting conjoined twin skeletons under a glossy pink heart before feeling uncomfortable all over again for even considering the purchase. The shop sells a book on conjoined twins that devotes more than 17 pages to Chang and Eng. I don’t know why I counted. I started feeling sicker and sicker as I looked at pictures of conjoined twins and curved spines, and I ultimately left without buying anything. • 9 May 2011