There was a time before the camera and the microscope, before x-rays and MRIs, when doctors and artists needed one another. Achieving insight on the body’s form and function was a truly demanding challenge, and everyone was better off for the doctor-artist partnership.

This collaboration reached an apotheosis in Philadelphia during the late 1800s, when the city was a center of innovation for both fields. Well-regarded artists worked within walking distance of great medical innovators, and the proximity paid off. Sculptor William Rush carved “gigantic size” anatomical sculptures of small parts of the body — the inner ear, sphenoid bone, temporal bone, the right maxilla — which anatomist Caspar Wistar used as models when lecturing in the medical school amphitheater. 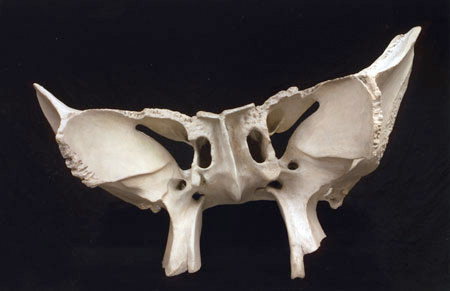 Realist artist Thomas Eakins collaborated with surgeon W.W. Keen in dissecting the cadaver of a muscular young Philadelphian, and used this as the basis for detailed plaster reproductions that enumerated specific muscles, veins, and bones.

These works, and many others, feature in a current special exhibition “Anatomy/Academy” at the country’s oldest art museum and school, the Pennsylvania Academy of Fine Arts. The works reveal, among other things, how artists and doctors unraveled mysteries of the body in an era limited by what the eye could see, and the hand record. Artists provided medical educators with detailed drawings and 3-D models of human body parts, and doctors provided art educators with lectures on anatomy and viewings of cadaver dissections.

Textbooks lacked photos but included beautiful flap anatomy figures, with layered drawings going levels deeper and deeper into the body. Such books were the only way to see inside the body without cutting into one. Gaining perspective on how different parts of the body related proved truly challenging. Anatomist Rufus B. Weaver, for instance, labored many months removing every speck of bone and flesh from a cadaver in order to uncover the entire stringy, spindly central nervous system — brain and nerves — for all to see. Today, this preserved dissection, which is included in the exhibition, is still fascinating to behold. Perhaps the only one of its kind ever completed, it stands head to toe like some lace-like creature with bulging eyeballs.

Today, of course, doctors and artists don’t really need one another to uncover such remarkable insights on the body. Technology can provide instantaneous images of the body in action. We can see individual nerves on an enhanced MRI, but we can now even see how nerve cells communicate, one molecule at a time.

But the fields of medicine and art continue to loop back to one another. Art students still visit gross anatomy labs at medical schools, for instance. And a growing medical humanities movement has considered how medical students might develop better diagnostic skills by looking at the body as art students do. Laboratory studies, technologically-generated images, and computer searches have advanced the practice of medicine, but along the way doctors might be losing the ability to “see” their patients. Evidence has pointed to inadequate physical examination skills among medical students, and declining teaching of these skills.

Some medical colleges are using art as an antidote to the trend. They are holding courses in which students visit museums such as the Pennsylvania Academy of Fine Arts to observe art and devise a “visual diagnosis” through close attention to subtle details in facial expression and body language.

In one such course at Yale Medical School, medical students are asked to diagnose individuals portrayed in 19th-century Victorian paintings at the Yale Center for British Art. Students inspect a painting, and then try describing it in such as way that someone who hasn’t seen it could form a mental image. Then, in discussion with a small group, they fashion a hypothesis on what the painting is about. For instance, in one painting a young man with an ashen face lies in a contorted position across a bed. An empty vial and scraps of paper clutter the floor. From these details, students often discern that the young man is dead, and indeed they are right: the painting depicts the death of Thomas Chatterton, a poet who poisoned himself after his poems were unmasked as forgeries.

After more exercises such as this, the students put their enhanced observational skills into clinical practice, inspecting photographs of various skin conditions. According to the creator of the course, Yale medical school faculty member Irwin Braverman, the students describe the images more precisely than they did before the art training, and they also begin to see things they ordinarily would have passed over. Detecting small details, Braverman says, can make all the difference in coming up with accurate diagnoses.

The Yale program, which is more than a decade old now, has inspired similar programs at more than 20 medical schools, but it is hardly mainstream to the medical school curriculum. There is reason to believe that it should be. Research on the effects of such courses has confirmed that structured observation of artworks improves medical observational and diagnostic abilities. Furthermore, the courses appear to improve a doctor’s overall sensitivity to patient well-being.

Doctors and artists are unlikely to return to their collaborative ways of yore, when they had reason to interact regularly. But this new approach bonds the two fields together in an inspired way. On viewing Eakins’ famous “The Gross Clinic,” which is included in “Anatomy/Academy” and portrays surgeon Samuel Gross, with bloody scalpel in hand, lecturing medical students over the body of an anesthetized patient, one wonders how today’s medical students would react to the scene — and be interested to hear their “visual diagnosis.” • 16 March 2011