So I’m walking up to Fifth Avenue from Madison on my way to see another one of those modernism shows at the Guggenheim when I find myself confronted by a gathering of women in designer jeans and LV handbags hanging out in the middle of the block. It’s not your usual museum crowd,  so I peer around and see that we’re in front of Cooper-Hewitt, the National Design Museum, which occupies the stately Carnegie mansion between Madison and Fifth on 91st Street. Looking more closely, I make out the placard in front of the building announcing what has brought out this particular demographic. The featured exhibition is titled: “Set in Style: The Jewelry of Van Cleef & Arpels.” What can I say?—given a choice between exploring modernism once again and gawking at diamonds and rubies, there is no contest. I go inside.

Snaking around the front hall of the Cooper-Hewitt is a very long line of mostly women. I wait too and finally make it inside. Let me report that the show, which runs until June 5, is, in its peculiar way, unparalleled. The exhibit features pieces that span the history of the company Van Cleef & Arpels, founded in Paris in 1896 by brothers-in-law Alfred van Cleef and Salomon Arpels. Both families were diamond cutters in the Netherlands and Belgium. When they set themselves up as jewelers in Paris, they immediately attracted a high-end clientele. The exhibition features pieces that span the 19th century to the present, but most date from that great period of fashion excess: the 1920s and ’30s. This is, in short, one over-the-top advertisement for a jewelry store, but who cares? — there is something about sparkly stones in ridiculous shapes that sends even the sanest woman into an imbecilic trance. So there I was staring at the displays that, according to a tussle-haired French designer on the introductory video, have been arranged like a great dinner table repast, only with jewels rather than food presented for our delectation.

The pieces themselves are arranged not by date, but by theme. These themes, if you happen to be interested, are Innovation, Transformations, Nature as Inspiration, Exoticism, Fashion, and Personalities. OK, they mean practically nothing and are essentially interchangeable, but they allow for gushing expositions on the wall of each gallery about the artistry involved in making these extravagant baubles.

So there I was, like the rest of the throng, taking in the so-called “mystery setting” — an allegedly daring “innovation” devised by Van Cleef & Arpels in the 1930s to mask how stones are placed in a piece of jewelry by cutting them to fit together in the manner of a mosaic. An enormous flower pin, constructed of diamonds and rubies and featured on the cover of the catalog, is a dramatic example of the “mystery” technique. 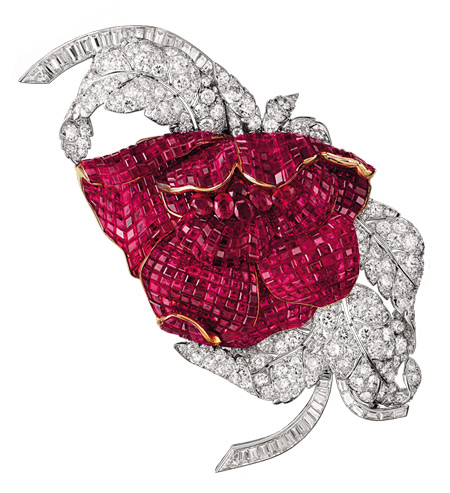 Also noteworthy were pieces under the category Transformations. This jewelry could be taken apart, so that, say, a portion of a necklace could serve as a pin (or to use proper parlance, a brooch), or a hanging jewel on a brooch could be affixed to a chain and become a necklace. The same principle appealed to my son when he was 7 and played with those transformer toys, only here it is directed at the female socialite with a plethora of disposable income. Among the most striking of the transforming items is the famous zipper necklace, worn by that most eminent of social wastrels, the Duchess of Windsor. We see the necklace on display, then can watch the video which shows how it literally zips up, snaps together and voila becomes a bracelet, where it presumably once dangled on the Duchess’ idle wrist.

Let me note that there was hardly a piece in the exhibit that I would consider wearing — not only because my lifestyle would not allow for it but because most of the pieces were pig ugly. All those bejeweled birds and impossibly ornate flowers — is it my Talbot’s sensibility that finds these things really quite ghastly? Still, I couldn’t take my eyes off them, nor could any of the other women present. While the men sat huddled together on the few chairs and benches available throughout the exhibit, we women peered and compared, noting this or that amazing feature of the baubles on display. Had I ever in my life spent so much time at a museum exhibition? I am ashamed to admit that I had not.

Toward the end of the exhibit, under the theme heading Personalities, there were photos of jewelry royalty: Jacqueline Kennedy Onassis, Maria Callas, Elizabeth Taylor, Princess Grace, and, of course, the witchy Duchess of Windsor. These women were shown wearing pieces that were under glass nearby. I especially liked a photo of Marlene Dietrich in Hitchcock’s 1950 film Stage Fright, in which she is shown wearing a gold and ruby cuff that was right there in the display case opposite. Dietrich presumably wore the thing only once, for that scene in the movie, and I will say that this was an instance where the bracelet made sense — it exemplified the character’s dramatically devilish persona.

With the advent of World War II, Van Cleef & Arpels opened a store in New York City and began to take on new subjects for its jewelry. There is, for example, a ballerina motif that kicks in during the ensuing decades, presumably owing to the influence of Balanchine’s New York City Ballet. According to a talking head in one of the videos, the influence went the other way as well: One night, Arpels had a dream of jewels dancing and imparted the image to the great Russian choreographer, who then rushed out to create his famous Jewels ballet. Believe this or not, as you wish — it’s all part of the mystique that the show seeks to create. Although what you see on display is mostly testament to bad taste and shameful extravagance, I for one couldn’t pull myself away and gazed besottedly as though at sacred relics. Go figure. • 16 March 2011