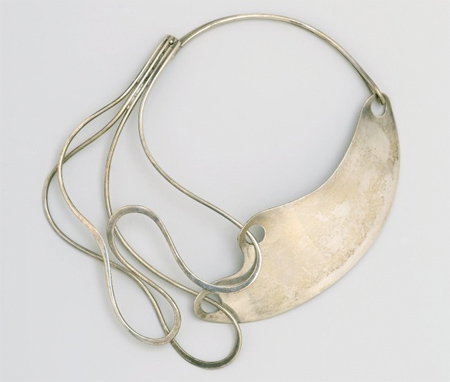 What is jewelry? We know what it is, of course. Jewelry is the pretty extras with which we adorn ourselves. But what is it really? There is no specific use to jewelry. Yet, humans in every culture on the planet wear jewelry of some kind. It is ubiquitous and pointless at the same time.

A piece of jewelry is in a sense an object that is not complete in itself. Jewelry is a ‘what is it?’ until you relate it to the body. The body is a component in design just as air and space are. Like line, form, and color, the body is a material to work with. It is one of the basic inspirations in creating form.

Art Smith was a Brooklyn man. He died in 1982 after a lifetime spent making jewelry. He had a shop on Cornelia Street in Greenwich Village back in the 1940s. He was influenced quite clearly by the broader trends in Modernism that characterized the era. One of his necklaces was, famously, inspired by the mobiles of Alexander Calder. You can see that piece and others, along with some of Art’s tools and drawings, at the Brooklyn Museum of Art right now.

I like Art’s statement about jewelry because it offers an interesting “third way” out of the art-versus-craft dilemma. In the last century or so, a dividing line between art and craft was drawn according to whether or not the object in question was “useful.” Crafts — such as weaving or carpentry or glass making — could be artful, but the fact that they were still geared toward the production of useful and usable objects meant that they were not art as such. Fine art distinguished itself by having no other purpose except to be art. A painting, for instance, cannot be used for anything else. Taken out of its context, a painting ceases to function.

The purposelessness of art has often been celebrated as its greatest achievement, most famously perhaps in the Art for Art’s Sake Movement of the 19th century, which itself influenced the aesthetic sensibilities of Modernism. But it has also always created feelings of unease and dissatisfaction. Plenty of movements over the last century have reached back to the craft traditions in order to reconnect art to use. You could call it, if you were so inclined, an ongoing dialectic.

Modestly, and with a gentleness that comes through even in his boldest designs, Art Smith worked in his little studio creating his own synthesis of art and craft. He was attracted to the purposelessness of jewelry and he wanted to explore its abstract possibilities, the way that jewelry can be like sculpture in its exploration of line and form and color. But he always came back to the human body. These beautiful shapes, these striking designs, had to fit onto an actual person, had to work with the shape and flow of the human figure.

His necklace “Half & Half” really is like a Modernist study. It is a plate, a swath of silver on one side, a squiggly line of thin silver doubling back over itself on the other. By any standard it is a lovely thing, a study in balance and contrast. But what it really wants is a neck to go inside it. It wants human flesh and a pair of collarbones to give it final completion. It begs to be part of a long evening, to move across the dance floor long after the midnight hour has chimed. It is less than useful and far more than useless and has therefore outflanked the problem of art and craft altogether. Maybe, it is simply beautiful. • 29 March 2011