In How Not to Be Wrong, mathematician Jordan Ellenberg uses a John Ashbery line as a guiding principle for those making claims or predictions based on probabilistic mathematical models (or any models, really): “For this is action, this not being sure.” Ellenberg calls it “the greatest summation I know of the way uncertainty and revelation can mingle, without dissolving together, in the human mind […] It is a sentence I often repeat to myself like a mantra.” He once asked me if, as a poet presumably, I thought he was “reading Ashbery too literally,” but Ashbery can only be read literally out of context, and then why not?

Literature seems to depend on uncertainty to qualify as art: A sculpture or a piece of music just exists, but language is so often used to argue or persuade that writers of literature (I use this term only to avoid the silly, infantilizing “creative writing”) must actively steer away from those tendencies. It’s easy enough in poetry, the most open and least linear of genres; for writers of fiction, less so, but semantics is on their side, since fictive means made up. With essays, it’s much trickier; many essays do attempt to persuade. But what if an essayist just wants to play? How does she signal to readers that the essay is an exploration and not an argument?

Recently, I have noticed an overabundance of uncertainty in literature – across genres, but especially in essays. The tricks we use to appear uncertain – asking questions instead of making definitive, declarative statements, for example – have become tics. Overuse these tricks and the piece assumes a pose of ignorant wonder – What is such & such abstract concept? Who can say? How can we ever know?

I have been thinking about this since reading an essay on necronyms by Jeannie Vanasco, in the Summer 2015 issue of The Believer. Vanasco was named after a half-sister, Jeanne, who died before she was born – that’s what necronym means; they were common when many children died in birth or shortly after. In the essay, she weaves personal narrative with research on other artists with necronyms, including Ludwig van Beethoven, Salvador Dali, and Vincent van Gogh. I loved this essay, but felt unsatisfied by the ending: “Is that why my father added an i to my name? To remind me that I was my own person?”

The British technology journalist Ian Betteridge is credited with the adage “Any headline that ends in a question mark can be answered by the word no.” I want to make a similar claim: Any question at the end of an essay can be answered with the word yes. (Same goes, most likely, for poems, short stories, etc.) The question is a kind of weasel syntax that lets the author have it both ways: make a gesture toward profundity without having to commit to it.

Call it the Baader-Meinhof phenomenon, but now I’m seeing this everywhere. Take Laura van den Berg’s new novel Find Me, which I’m about 100 pages into. (Full disclosure: I both know Laura and genuinely love her writing.) I keep noticing how chapters and sections tend to resolve without resolution, to end on a question or note of uncertainty: “For me, the woman had no answers” (79). “I wonder if I will ever know what it’s like to feel at peace” (76). “He looks like himself, but acts like a different person – how can we be sure who he is?” (73). “I wonder if she ever thinks about me” (70). This isn’t a problem, just a pattern, and I see the reasoning – it’s a way of propelling the reader forward, of deepening suspense, heightened by the present tense. Plus, this novel is about uncertainty – a mysterious illness that causes loss of memory; an orphan looking for her mother and other missing pieces from her past. 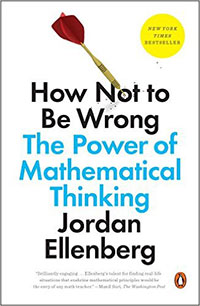 How Not to Be Wrong: The Power of Mathematical Thinking
by Jordan Ellenberg 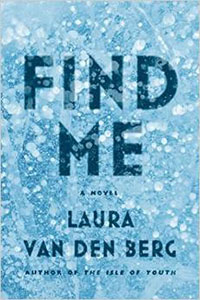 It’s also more or less in line with the backlash against grand narratives, neat resolutions, and pat epiphanies that has been going on since modernism. But we tip into overcorrection when the absence of conclusions is what feels false. Questions don’t always introduce meaningful uncertainty; they can feel superficial, or condescendingly rhetorical, like the text is subjecting you to the Socratic method.

An exceptionally egregious case of this can be found in Mary Gordon’s essay “On Enmity,” originally published in Salmagundi and chosen for The Best American Essays in 2014. Here is an example of taking the etymology of the word essay too far (this bit is excerpted from “Trying for a Definition,” the first of fifteen brief sections):

I am trying to understand the meaning of enemy, to consider what it might mean. I am trying, before anything else, to reach a definition.

But then, there must be other questions.
Who defines the enemy, who is it that names him?
Is it the one harmed by him? Is the one harmed always right in his naming?

To me, this takes the phrase “willfully obtuse” to new extremes. What could be more facile, and more disingenuous? I want essays to embody discovery, but surely we don’t have to start from a position of complete ignorance, much less feigned ignorance, a position of “I know that I know nothing and do not have access to a dictionary.”

The truth is, I learned things from this essay. It is full of fascinating stories: A story about an enemy from Gordon’s past who died of breast cancer years after they stopped speaking. A story about Simone Weil and George Bernanos both writing on the Spanish Civil War, she for a left-wing press and he for a right-wing press; they find themselves united in their horror at the war (“I thought you were my enemy, but you are my brother,” Weil wrote). A story about an environmental scientist telling a conference audience that Rachel Carson, who campaigned against DDT, is “responsible for more deaths in Africa than any political tyrant.”

But I did not learn anything from the compulsive questioning throughout: “Who did she think of as her enemy?” “Do dogs have in their minds the category ‘enemy’?” “Does that mean that Rachel Carson, friend of our fragile planet, is the enemy of millions of the dead?” This is performative doubt, and would be taken as comical if she weren’t discussing a serious subject. Mary Gordon knows things, so why the faux humility?

For herself, the poet avowed, “clarity is an ideal to which we can aspire safely,” the implication being that life will forever frustrate any full realization. She then spoke of her sense of there being a kind of “cheesecloth” between all of us, which makes her determined to send her signal “as strongly and clearly” as she possibly can. “To use a word,” she added, “is to take a step into a jungle of forking paths,” and achieving clarity by way of words would seem to be a contradiction in terms. Ryan concluded by reading Robert Frost’s short “Dust of Snow,” a poem she maintained is utterly clear in its surface presentation yet contains something other, a mystery. “Its clarity points to something that isn’t rational.”

This is true in essays and fiction too; ambiguities bubble up unbidden; language is a “lossy” medium for meaning. We find beauty in a gap in meaning; it can even feel like meaning accrues in the gaps. But there’s a risk of falling too in love with these chinks in knowledge, and widening them artificially. •