In the past few months, scanning the new arrivals at my local library, I have picked up the same paperback novella several times. Drawn to its one-word title and desaturated blue and off-white spine, I never remember why I decided against it on previous occasions. Then I see the descriptive copy on the back cover, which begins with something like “Written in one long incantatory paragraph…” At this point I put it back on the shelf. I have no desire to read a book without paragraph breaks. The lack of white space on the page can make me feel a little panicky, like being on a train in an underground tunnel – what’s my exit strategy? Reading a book, I always glance ahead to see where the section or chapter ends, so I know when I can stop reading if I want or need to. Stopping mid-paragraph is deeply unsatisfying – no sense of closure, no easy way to remember where I left off when I next pick it up.

Claustrophobic tendencies aside, of late I am actively interested in paragraphs, their formal possibilities. Sentences are taken to be the basic unit of prose, and we use them metonymically – we say “She writes wonderful sentences” when we mean to praise the author’s prose. James Salter is so well-known for his sentences that it rises to the level (or sinks, I suppose) of critical cliché. In a 2013 profile in the New Yorker, Salter is quoted, in a letter to a friend: “I wanted to get past the great-writer-of-sentences thing. I don’t care about that, at this stage.” But why is it, I wonder, we rarely talk about a writer’s way with paragraphs?

It may be because there is a lot more you can do with a sentence to vary it; syntax and diction, all those micro-choices that add up to the macro-style of (say) a novel, happen at the level of the sentence. There are pretty much only two ways to vary your paragraphs. The first is length. Some writers work in short paragraphs, some in fluctuating lengths, others in long, multi-page-spanning paragraphs, like our incantatory friend above. Some writers work at both ends, depending on the book – compare As I Lay Dying to Absalom, Absalom! It’s no coincidence that the former, with its many breaks, is easier to read; it could almost pass for YA. Bestsellers keep paragraphs and chapters short as a tactic – they make for more addictive, snack-like reading, so the reader repeatedly thinks I’ll just read one more.

The second – and in my view the far more interesting lever – is to change the way you build sentences into paragraphs, and the way you move from paragraph to paragraph. How many sentences are there per paragraph, and what links the sentences? What style is achieved in the blank space, the synapse, between end punctuation and initial letter? What governs the move to start a new paragraph? What happens in the pause after the hard return?

Single-sentence paragraphs, when not used for dialogue, are often used for humor. See the first three paragraphs of David Foster Wallace’s essay on cruise ships, “A Supposedly Fun Thing I’ll Never Do Again”: 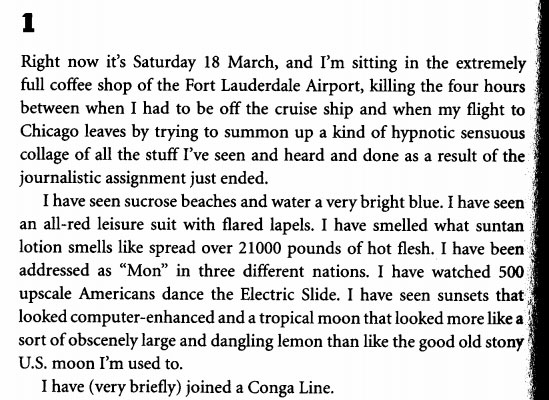 The comic-timing pauses around the Conga Line sentence remind me of the way the Bobby character in Richard Attenborough’s film version of A Chorus Line delivers his monologue about growing up in Buffalo – strolling stage left, pausing to face the director before delivering the laugh lines, then strolling back stage right. So you get the set-up mid-stroll (“I couldn’t catch a ball if it had Elmer’s Glue on it. And wouldn’t my father have to be this big ex-football hero. Well, he was so humiliated, he didn’t know what to tell his friends, so he told them all I had polio”); then the pause, the quarter-turn, and in a tone somewhere between smirking and deadpan: “On Father’s Day I used to limp for him.” Wallace uses this tempo for jokes throughout his essay; on the next page, the one-line paragraphs are “(Actually it was more like I shot at skeet at sea)” and “I now understand the term ‘Duty Free.’”

What most people follow is a variation of the rule established for “five-paragraph essays” in grade school, where each paragraph is built around a “topic sentence.” As such, if the essay is an argument, each paragraph represents a subargument, with the first and last paragraphs reserved for introductory and closing remarks. (This seems like a big waste of two-fifths of the allotted paragraphs; in school I learned to save one of my best points for the end, to avoid having to rephrase my intro all over again.) In fiction, especially long fiction, the job of the paragraph is somewhat more subtle, but as a unit it endeavors to move the story forward in its tiny way; it’s a rotation of the wheels.

In nonfiction, I’m obsessed with what I’ve come to think of as the invisible transition, where there is no clear, necessary connection between two paragraphs, and yet – something happens. The juxtaposition isn’t as jarring as a non sequitur, but it could have been otherwise. In fact I’d argue that what’s mostly “lyric” about a so-called lyric essay are these transitions, these leaps, more so than some inherently “poetic” quality of the language. Invisible transitions make a text feel more open, and inside these openings, essays gesture toward poetry. (Gertrude Stein said “Sentences are not emotional but paragraphs are,” though who knows if she meant it.)

Some writers are in the habit of overwriting their invisible transitions with visible markers, be it numbers that transform the paragraphs into an ordered list (as in Bluets by Maggie Nelson), or those little typographical ornaments used to mark section breaks, the glyphs sometimes known as flourishes or fleurons or dingbats or asterisms, depending on their design. In My 1980s & Other Essays, Wayne Koestenbaum tries both approaches, though sometimes the numbered sections include multiple paragraphs. This tactic is almost a denial of conscious involvement in the ordering of paragraphs, bringing the essay closer to a notebook of pensées (or maybe a blog post); it gives the appearance of “effortlessness.”

Accordingly it’s in the essays that don’t use section signs that I appreciate the transitions most. Take, for example, the first two paragraphs of Koestenbaum’s “John Ashbery’s Lazy Susan”:

A John Ashbery poem behaves like a lazy Susan. Spin it and get whatever condiment you want, without having to say “pardon my reach.”

His poems offer a model of writing-against-fatigue, a method of incorporating lethargy in the compositional act: “I’m too tired to write” and “I want to write” can coexist, sing together, in utterances equally industrious and dithering. How hard does an Ashbery poem work? Very hard. Not hard. Call it the Lazy Susan Sublime.

Because two paragraphs are not enough to see these transitions as a pattern versus an isolated instance, let’s look at the fourth and fifth paragraphs too:

After Ashbery, it’s impossible to use an idiom seriously. He corrupts our sincerity function, perverts it, encourages us never to mean what we say. It’s banal to be transparent.

Each paragraph is almost self-contained, a mini-essay inside the essay – not fractal, but molecular. (To put more water in the pool, you don’t have to consider arrangement; just add molecules.) There is no “secondly,” no “furthermore.” When this is carried out for the length of an essay, there’s a sense of orchestrated contingency. Each sentence is perfected, but the whole could have easily included more paragraphs, or less. It had no inevitable direction. (Note how Koestenbaum seems to spring off into new paragraphs based on whim, a sonic association, a preoccupation with a single word, a desire to go back and expand. Prose is fecund this way; it can grow from the inside, not just the end, and paragraphs are opportunities for fruitful digression.) I love the way inter-paragraph gaps fight against the idea of essay as argument, and make it an act of discovery. Or rather a document of discovery, like an explorer’s journal, written in pencil and gone back through – to add color more than accuracy; even at the expense of accuracy. The essay needn’t be faithful to the path of the thinking, but the form can reveal how thinking happens, like when a song gets stuck in your head and only later do you realize why you thought of it, that you had read or heard a word from the third verse. There’s magic there – the mind doesn’t always show its work. Why should prose?