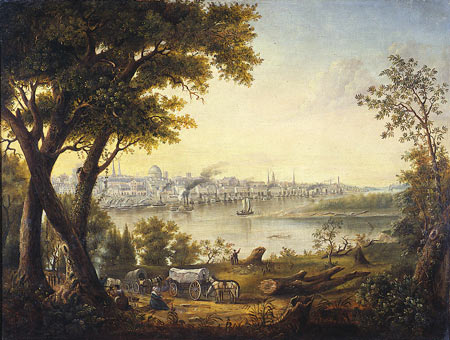 Just got in to St. Louis. Being in this part of the country is about the Mississippi. The Mississippi rules. Has any natural body borne more symbolic weight, stood for so many different things?

A painting by Henry Lewis hangs in the Saint Louis Art Museum. It’s called, laconically, “Saint Louis in 1846.” The center of the painting shows a bend in the Mississippi River. In the background, the skyline of mid-19th century St. Louis; in the foreground, a family with horse and wagon, presumably on the way to settling some piece of land further out west.

From the standpoint of the painting, it’s the Mississippi river that holds all these contrary forces together, or, you might say, allows both of them to happen. The Mississippi divides the country east to west and therefore divides the country between a civilization that is still connected to Europe and the open lands out west. It is also the thread between North and South, between an industrial economy and a primarily rural and agrarian one. The small campfire in the foreground of the painting is doubled by the smoke coming from the stacks of the riverboats on the opposite shore. The Mississippi sustains them both.

Hindsight being 20/20, it is easy to see the conflicts inherent in all these divisions. But I think it is there in the painting, too. There is something impossible about the painting, something incongruous about the western settlers on the one shore and the packed urban density on the other. The family heading west is opting for one over the other, but they are also, ultimately, agents of the civilization they are extending. The painting thus takes away the choice just as it seems to be offering it. Simply put, you cannot extend civilization and preserve its opposite at the same time. Even Mark Twain, the man who got his name from the Mississippi and who was its truest voice, eventually made the choice. His late work Life on the Mississippi finds Twain heading north at the end of his trip and praising the parts of the Mississippi above St. Louis. That is where the future is to be found, he decides — not in the flight from civilization in a fantasy of absolute newness, but from within the civilizational spaces themselves.

Which brings up the last point. The reality of the split world that “Saint Louis in 1846” portrays is a reality that cannot hold. The painting itself can do nothing to resolve that doubleness into a oneness. A house divided against itself cannot stand. That’s reality. There is one place, however, where such an impossibility can persist — the imagination. As a painting, the moment of play and tension between civilization and the frontier can exist forever, there on the canvas. In a way, that is what happened in America. The reality of the open West went away. But the idea did not. The desire to constantly relive the dream in which possibility outweighs actuality churned on within the American mind.

In the last paragraph of Life on the Mississippi, Twain writes, “We struck the home-trail now, and in a few hours were in that astonishing Chicago — a city where they are always rubbing the lamp, and fetching up the genii, and contriving and achieving new impossibilities.” If we can’t continue to extend the frontier out into actual space (at some point you reach the Pacific Ocean), we’ll do so intensively, as an idea that is constantly reapplied to the civilization we’ve created and are surrounded by. That’s why “Saint Louis in 1846” is still an affecting painting. It shows us our national schizophrenia as it migrated from what we were actually experiencing to an ongoing battle within our own heads. • 1 October 2008