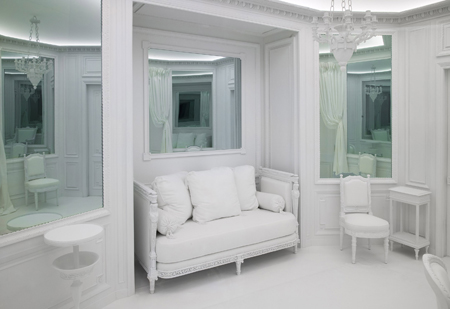 You may have noticed that the Metropolitan Museum of Art in New York City contains strange rooms. They are tucked away in the European Interiors section or back in the American Wing. These rooms do not display simply art or artifacts; they display other rooms. Or you could say that the rooms themselves are the display. In the American wing, you can see the interior of an old colonial house, or something tasteful from the  Edwardian era. There is an entire living room designed by Frank Lloyd Wright, originally part of the Little House in Wayzata, Minnesota. In the European section of the museum, the interiors give you a glimpse of palace life in the 17th century and the salons of the 18th century.

You stand at an open doorway, or perhaps gaze through a window at the interior within. You see another age, another way of life. These rooms are a throwback to another era of the museum, a time when travel was more difficult, when other forms of media were less sophisticated, when panoramas and stereoscopes and other such devices were a legitimate way to gain access to otherwise inaccessible experiences.

These display rooms are, in a sense, life-sized models, rooms in a one-to-one scale with actual places that once existed or, in fact, still exist in the real world. Indeed, the situation in these rooms is even one degree more complicated since many of the objects and pieces of furniture in the rooms are the real deal. That Louis XVI armoire is, in fact, a Louis XVI armoire and it did, once, sit in a room exactly like this one. Except that the room wasn’t this one. The room is a fabrication meant to recreate the surroundings in which these real objects once existed.

I always find these rooms eerie and otherworldly for precisely these reasons. It is the mixture of reality and fabricated reality that creates a third space that seems neither of the museum nor of the world outside the museum’s walls. It is a different and special kind of reality altogether in those rooms, and the museum-goers who wander around in the historical display rooms of the museum always seem to do so with a detached melancholy not detectable in other parts of the museum.

As part of its program of exhibiting solo works by contemporary artists, the Met invited Icelandic artist Katrin Sigurdardottir to make an installation in the Lila Acheson Wallace Wing’s north and south mezzanine galleries. Sigurdardottir decided to recreate her own versions of two of the Met’s historical display rooms, 18th-century French rooms to be exact, one from the Hôtel de Crillon (1777–1780) on the Place de la Concorde, Paris, and the other from the Hôtel de Cabris (ca. 1774) at Grasse in Provence.

It is the Hôtel de Crillon room that intrigued me the most. In the middle of the south mezzanine, Sigurdardottir simply rebuilt the room from the hotel. But it is not that room. It is smaller, I think. Or it looks smaller when you see the entire thing as a box within the empty space of the south mezzanine. More strikingly still, there is no color, no dyed fabric, no painted scenes on the wall as can be found in the room down the stairs and around the corner. Everything in Sigurdardottir’s version of the room is white — a flat and empty white at that. It is as if this room is a dream of the other room, which was, itself, but a memory of the original room on the Place de la Concorde.

For a couple of thousand years human beings have been worrying about the status of art in the real world. The way art represents the world can often seem nothing but a pale and inferior reflection. In a funny way, though, Sigurdardottir’s room manages to be more real to me than the original room it is copying. Maybe that is because the room it is copying is itself a copy of a real room, and the original room was one filled mostly with decoration and artifice. Sigurdardottir’s version, a copy of a copy, stripped of all color and standing there like the dream of a memory, conveys a startling and unexpected honesty. Maybe the fact that it is a copy that openly presents itself as a copy makes it feel more real. But it is a strange and amusing experience to make your way back to the original room in the Wrightsman Galleries and feel that the original room lacks reality after having seen the whitewashed copy. The real original room is, of course, back on the Place de la Concorde, except that it is not. It has changed and transformed many times over the centuries, handing the status of real reality to its copy at the Met Museum and to the temporary copy of that copy around the corner and half a flight of stairs up on the south mezzanine. This entire trip takes about five minutes and is a brief but illuminating tour through the varieties of reality that can be found at the beginning of the 21st century. • 20 April 2011