At the turn of the 20th century, a well-made American story was one delivered in a straightforward style. O. Henry and Stephen Crane relied on suspense and tight construction to propel the reader along the story’s length. This method backgrounds the writer, foregrounds the tale.

By the second half of the century all this had changed. There were four causes: the rise of the writing workshop, the sudden preponderance of writing students, the starved market for short fiction (gone was the Saturday Evening Post, gone was Collier’s), and the advent of TV. New thinking, as modeled by Eudora Welty and John Cheever and then apotheosized in the K-Mart realism of the students of Gordon Lish, proposed a different method of keeping the American reader turning pages: you made them feel through the characters, sympathize with characters – you made your characters into someone they might meet on the street, befriend, and gossip about. Incident was less important: what was more important was that you made them see themselves in someone with a very different life. This method backgrounds the writer, foregrounds the character.

Among the many revelations in Vintage’s recently released New American Stories, edited by Ben Marcus, is that new methods are being tested in the laboratories of workshops in all 50 states. Among them is an alternate method for creating narrative tension, a new use of tone and rhythm to create something singsong and very nearly childlike.

Take this, from, Rachel B. Glaser’s “Pee on Water,” a seven-page history of life on earth:

Feathers, spikes, hooves. Clouds crawl smugly. Atoms bump and lump. Birds have sex. Bears have sex. The sun gets better at setting. Monkeys play with sticks. Monkeys eat ants. They get sexy about each other’s butts.

Or this, from Christine Schutt’s “A Happy Country Seat of Various View: Lucinda’s Garden” about a pair of young adults at a seaside cottage:

They napped; they looked at the sky; they shared a joint, and they knocked around in bed and felt rubbed and eased when they were finished, it was quiet in the Cottage except for the sound of the rain. They talked about money until they made themselves thirsty.

Even the more mainstream stories in this collection, like Rebecca Lee’s “Slatland,” often resort to kidspeak about otherwise adult events. Here, a psychiatrist sympathizes with 11-year-old Margit about her parents’ divorce: “When I was young,” he chants, “I loved my mother. She was a real lumper. Then one day, kerpow, she was dead.”

Like most people, I am naturally suspicious of the new. On reading this exchange, I set the book aside and emailed the quotation to a friend, adding:

Interesting contrast in the new anthology: those stories that are most “mainstream” (those stories originally published in the NYer, basically, which make up an amazing 1/4 of the total pagecount) feel most essayistic (the era of the O Henry spring-trap shows zero indication of returning), most in search of the many angles of “the real.” Those that are most “avant” or “experimental” or whatever are uniformly told in a kind of singsong kidspeak. Why is this? Our generation’s overwhelming nostalgia in the face of new technology? The increasing prominence of visible children in society? (It’s not even vaguely embarrassing to take them solemnly.) Our youth-centric pop culture? Lack of sophistication among writers (i.e. they never really grew up)? “Don’t send our children to war”? The increasing prevalence of extremely extended childhoods?

My friend chose to give my rant the space it probably needed – we spoke on other subjects. Fortunately, I do usually get around to revisiting my snap judgements and I did so here. What’s valuable about kidspeak? What does it accomplish that a loose-knit memoir-style New Yorker story might elide?

For one thing, it foregrounds language, forcing the reader to give real thought to the words they’re reading. It doesn’t mimic the rhythms of a child’s speech, it mimics the way adults talk to children. Kerpow, she’s dead. They lumped around. See Dick run. 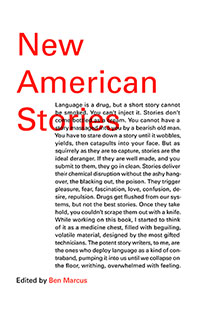 It sounds like modernism. Although American modernism flourished most obviously in the novel and the poem, much less in the short story, Faulkner wrote modernist stories, as did William Gass. In the 1990s David Foster Wallace wrote them. Years earlier, Gertrude Stein had written stories in a progenitor voice of this singsong kidspeak. But all of these prior writers were more concerned with syntax than with tone. It’s an important difference. Syntax is more intellectual, tone more musical, intuitive.

Wes Anderson has built a career worth tens of millions by describing an adult universe through the vocabulary of a child. He’s not alone. This kind of tonal manipulation, a way of omitting the walls and foundations of character or plot, has been on the rise since the 1970s generally – it’s a kind of horror camp. John Currin has made a name for himself as a painter uncannily merging the cutesy and grotesque. In 2010 Lara Glenum and Arielle Greenberg edited an anthology of Gurlesque poetry, tonally mixing the “girly” and the gross (“More glamorough / more pretooty” implores Catherine Wagner in that anthology’s “Cafe Rougé”).

The great value of this device is that re-contextualizing can help us to see things anew. The great danger, as with any technique, is that it can eventually come to seem like a crutch: make a handful of vignettes about children’s games, make the games themselves bleakly sinister, cackle in the dark and call it a day.

I see little evidence that such stories can be told over a campfire, as those in the ’20s could, or that they can substantively address social injustice, as K-Mart realism was always ostensibly able. But I look forward to being proved wrong yet again. They live purely on the page, but as vibrantly as poetry. In many ways, They’re a good deal closer to what we think of as poetry than what we think of as prose.

Take the opening gambit of “Pee On Water”:

Though alien to the world’s ancient past, young blood runs similar circles. All these bones are born from four grandparents. Baby teeth and baby teeth all down the line. Jackets didn’t used to zip up. There wasn’t a single door.

As in poetry, we find ourselves talking not at all about plot and character (there are no characters, and we know the plot going in) but about language, image, and the movement of the camera from the close-up to the far-away. That first sentence – young blood … in circles? – jars us into paying closer attention to the next. Four grandparents: not ancestors, but grandparents: the word a child would use. Then we encounter baby teeth – “and baby teeth all down the line” – a riff on that logic joke about tortoises all the way down. We’re flattered to get it. We read on. Jackets and doors: we’ve moved from the cosmic to the tiny in record time. It is not our sympathy that’s being solicited here, but our enchantment.

This same focus on the small and the childlike follows us to the final lines of the story, where: “Fur ruffles in the wind. Candles coy and shy their hot face. Many parts are still the same. The day is light and easy to see in. A soap bar slims down to a sliver.” Children love fur, candles, they know baths. “The day is easy to see in” is all small words, easy to say or to eat.

By appealing to the primal, and doing so in a story about the primal, Glaser achieves the same effect here that Paul Klee achieved in his 1939 cute/savage stick-figure cave-style painting “Hot Pursuit,” or that Vaslav Nijinsky achieved in his thumping and grinding choreography for Igor Stravinsky’s 1913 “Rite of Spring.” But instead of the childhood of humankind and its attendant savagery, Glaser trains her focus here on the childhood of actual children, and their ability to charm and delight (and our ability to feel delighted and charmed by the way we speak to them). The story isn’t a drama: it’s a game. •