In How to Do Things with Pornography, feminist philosopher Nancy Bauer refers to a specific idea of pornography: the inherently harmful boogey creature that anti-pornography feminists have railed against since the 70s. A significant portion of her book is spent discussing the flaws in the anti-porn rhetoric of both Catharine MacKinnon and Rae Langton. All of which is in the service of what seems to be the true focus of the book: arguing against philosophers’ interpretations of J.L. Austin’s How to Do Things with Words.

Austin’s philosophical work centered on language, specifically focusing on illocutions, perlocutions, and speech acts — uses of language where saying something is also doing. In the 55 years since Austin’s death, a number of anti-pornography feminists have referenced Austin’s work in their attempts to undermine the protection that the First Amendment provides adult films and the people who make them by framing it as something other than speech. Speech has First Amendment protection, but if pornography is other, that issue becomes less clear. Bauer disagrees with some of these finer points.

Declaring that the idea of pornography as a form of speech is overly simplistic, Bauer asks a number of questions:

“Who is doing the speaking? The subjects of the photographs? (And are they subjects or objects—or both?) The pornographers? And what exactly is being said? And to whom?”

Instead of attempting to answer the questions, she expresses surprise that “none of the people on either side of the pornography debates appears to be interested in doing [this work].” Bauer suggests the reason that these questions are not explored is due to the amount of pornography one would need to view and the amount of introspection one would need to have regarding that pornography, as well as awareness of one’s feelings on it. This would be an understandably distasteful task for people who believe pornography is inherently abusive towards women as a gender.

This is to underline that defining pornography and exploring what can be done with it is not Bauer’s subject. In How to Do Things with Pornography, pornography is merely the means with which Bauer achieves her own ends. 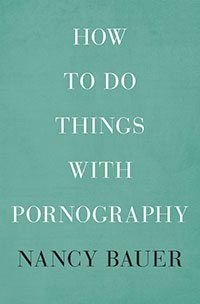 How to Do Things With Pornography by Nancy Bauer. Available now from Harvard University Press (2015) 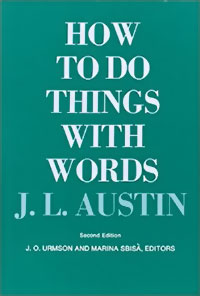 How to Do Things With Words, Second Edition by J.L. Austin. Available now from Harvard University Press (1975)

Instrumentality is shown when Bauer uses pornography as a way to discuss her understanding of How to Do Things with Words, failing to define it or engage with it herself while using it for her own purposes in dealing with Austin.

Silencing is shown in the glaring omission of any quotes from pornographers, be they producers, directors, performers, photographers, or writers. When Bauer’s book focuses on philosophy, she repeatedly references the words of Catherine MacKinnon — who, while she is a formidable lawyer and holds a PhD in political science, is not a philosopher. Yet, Bauer failed to include or acknowledge at least some of the writings of pornographers that have been published in various books as well as academic examinations like the Porn Studies Journal, or even mainstream publications such as the New Statesman, the New York Times, or the Guardian. This can be understood as silencing of pornographers.

I’m sure that Bauer’s comments on Austin’s How to Do Things with Words are a worthwhile addition to the philosophical study of illocutionary force. Unfortunately, her choice to build this critique around pornography without deeply observing or accurately describing it — or even taking into account the work of modern academics regarding pornography — leaves her book littered with wildly inaccurate generalizations. •