In the Soviet Union, the name of the game was denunciation. One person would denounce another. A third person would denounce the second, i.e., the first denouncer. And so it went, the denunciations resulting in the executions of countless citizens, many — perhaps most — of them innocent. Others were sent to Siberia, which was simply a somewhat slower death. The game was an infinite recursion or regress, and if Boris Yeltsin had not mounted a tank to announce the end of the system, at some point there would have been nobody left to guard the crowded prisons.

Vasily Grossman’s unfinished novel, Everything Flows, brilliantly demonstrates and details the system. Grossman was a reporter as well as a fiction writer and intimately acquainted with war and its horrors. Like Everything Flows, his most famous work, Life and Fate, is unfinished. By the time he died, in 1964, he considered himself a failure, a man whose mark on the world had been erased and forgotten. He believed the unfinished novels would never appear. Fortunately for the world, they did in the ‘80’s. 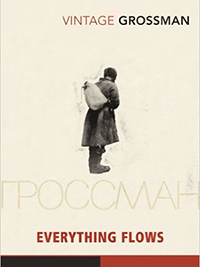 Everything Flows by Vasily Grossman

A backstory like Grossman’s will attract some sympathy from an American audience — we always like to see the smaller guy, the erstwhile loser, win — but even more remarkable is his penetration of character. Ivan Grigoryevich, at the age of 50 (elderly in the Soviet Union at that time), is released from the Gulag after 30 years of hard labor, isolation, brutal weather, negligible food, and an ongoing criminal treachery that mirrored the system at large. Grossman’s portrait of Ivan Grigoryevich is remarkable precisely because he neither exaggerates nor romanticizes. Ivan is not a cartoon, not a buffoon (as many wonderful characters in Russian literature are), not evil, not a saint, not a hero, not a dummkopf. What is he? He is a man.

He is a kind, loving, and decent man. When he meets Anna Serageyeva, a widow who rents him a room for very little money — he has a job now, as a metal worker “in a small shop that employed the disabled” — we realize he is a man who respects women. He sees Anna as a human being. There is in him no trace of disdain, no recourse to patronization, no defensive bullying, not even a moment’s surprise at Anna’s intelligence and emotional strength. When they tell each other their stories, they are equals. When they share ideas, they are equals. Would that this were true everywhere, inside and outside of books.

Anna has a son, and Ivan begins to understand what it might feel like to have a son. What’s more, because Ivan loves Anna and her son, he grows in stature. We must take him seriously, this half-dead leftover from the camps who feels, learns, loves, and cherishes his freed life.

But remember, this is an unfinished novel. There comes a point when the author turns from Ivan to a description and analysis of Communism and the State. Grossman may have meant to incorporate more chapters about Ivan, or to splice pages of what we might call political philosophy into previous chapters, or maybe he saw the analysis as a bridge to a fuller narrative about Ivan; we simply do not know. For my money, these analytical pages are every bit as exciting as the narrative. As a journalist he was perceptive, probing, astringent, and thorough. As a writer, he is acute, lyrical, dramatic, and, best of all, wise. His portraits of Lenin and Stalin convince. He argues that the State relied on the words “freedom” and “democracy” precisely to disguise the dreadful loss of freedom. “From the Pacific Ocean to the Black Sea, non-freedom triumphed — everywhere and in everything. Everywhere and in everything, freedom was killed.” He goes on to say that “it could never have been carried out without a great deal of bloodshed. Freedom, after all, is life; to overcome freedom, Stalin had to kill life.”

Having established the equivalences of freedom and life and death and the lack of freedom, Grossman can suggest that in the future, a man like Ivan Grigoryevich may look forward to a free society. And perhaps he could through the brief years of the Khrushchev Thaw, when a few writers like Solzhenitsyn were allowed to publish books, or, rather, a book, since One Day in the Life of Ivan Denisovich was the only book of his to appear in his country, and it wasn’t a book but an edited publication in Novyi Mir, an esteemed literary magazine.

Grossman could not know that future Soviet leaders would make freedom almost as difficult for Russians as had the earlier ones. Gorbachev was something of a savior, at least for a while. He was neither insane nor paralyzed, but when the system failed (largely because of Chernobyl in 1986), Russia began to resemble the wild West, and soon after that Vladimir Putin and his oligarchy took over. It’s hard to find freedom in this outline.

In closing, I want to say that the information contained in the auxiliary sections is unusually full and helpful. If more books followed this volume’s lead — offering details that contextualize themes — readers, at least this reader, would be grateful. •