When I was a child I read poorly written Sunday-school books. They happened to be Catholic books because I read them in a Catholic Sunday school. My mother was a Congregationalist and she would have preferred I be reared to that austere faith, but she lacked the strength to battle the passionate alcoholics and living martyrs of my father’s side — Catholics to a man jack.

It was bad news for me but even worse for the nuns. There was hardly a moment when I wasn’t in their face, loaded with questions they weren’t answering: Why do humans have immortal souls and not animals? Why would God create people with free will if he knew ahead of time some of them would damn themselves to eternal agony? Was this some kind of self-loathing he was working out symbolically through us?

These were small-town nuns, not scholars, and so they brushed off all of my questions with, “It’s a holy mystery.”

Religious education, it was becoming clear, was to be a one-way street: no question or observation of mine would make a lick of difference. I was to absorb, sponge-like, all I was told, and then behave as instructed.

So I quit the church and became a reader of novels.

Novels don’t preach. They are dialectic. A character encounters a landscape, say on the shores of a frozen lake in the rural northwest. Add a second character, say her older sister. How do the two of them interact? What if they’re stranded on an island in the center of the lake with the light fading out of the sky and no way home? Here is life — in all its terror and mystery — on the human scale, left for humans to puzzle through. It is not a sin to speculate. It is not a sin to curse.

Novels, like the church, trade in mysteries, but good novels also dispense with dogma and cant. Their characters are not gods but humans, left to make sense of the world as best they can, with no access to answers. Any character in a novel who tells you they’ve found an answer is undercut by the fact that they’re a character in a novel. The whole enterprise of writing and reading such books opens a field of indeterminacy into which the reader can float his own ideas, in which characters, author, and reader work together to find a light through the dark.

Marilynne Robinson’s Gilead, for example tells the story of three generations of Calvinist pastors in a small Iowa town. The oldest is a social-justice revolutionary in the time of the Civil War — one of John Brown’s holy soldiers — who won’t stop at murder if that murder frees captive souls. His son is a pacifist. His grandson, the narrator, John Ames, simply tries to make sense of it all and can’t really do so.

This is a novel about faith, yes, but one written with deep humility. Housekeeping, Robinson’s first and most famous novel, is not a book about faith, but rather about the immensity of the world and our impermanence on its surface. These books are thoughtful pleasures because they fill us full of the world — the dark as well as the light — and leave us to impute meaning as we will. They trust us.

I’ve loved Robinson’s novels for years, but I opened The Givenness of Things, her latest collection of essays, and found myself on the receiving end of a stern religious talking-to. The subject matter was the same as Gilead‘s: faith, its difficulty, and the buried history of liberal American Christianity. But the voice was different, louder but lesser, clotted, rushing to say nine things at once and so saying little. Needless to say this is the last thing I expected. 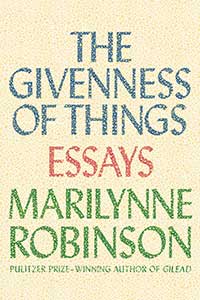 The Givenness of Things by Marilyn Robinson. Available now from Farrar, Straus, and Giroux.

All of the essays here — sermons, really — share a common aim: the belittling of the biological sciences (chiefly neurology and “Neo-Darwinism,” which she seems to believe ubiquitous but does not distinguish from regular Darwinism) and the elevation of the religious life. Yes, she’s proselytizing. Marilynne Robinson, creator of vivid, nuanced landscapes and the variously motivated characters who people them has somehow managed to reduce herself to a missionary with a pamphlet.

“I am content to place humankind at the center of Creation,” she writes in “Humanism,” the essay which opens the book, nicely echoing those nuns I’d had done with in the 1980s. Humans, you see, have souls, and animals don’t. It’s as simple as that. She attempts to critique the pretensions of neuroscientists and the neo-Darwinists via the mind-bending discoveries of 20th-century physics, but this is like critiquing chalk with the language of cheese. She wields reason and science like axes until the moment they stop serving her argument; then she drops them as if they seethed with infernal fire.

Only the soul is ever claimed to be nonphysical, therefore immortal, therefore sacred and sanctifying as an aspect of human being. It is the self but stands apart from the self. It suffers injuries of a moral kind, when the self it is and is not lies or steals or murders, but it is untouched by the accidents that maim the self or kill it. Obviously this intuition — it is much richer and deeper than anything conveyed by the word “belief” — cannot be dispelled by proving the soul’s physicality, from which it is aloof by definition.

In the very sentence that preceded the above, she derided neuroscience for being “remarkable among sciences for its tendency to bypass hypothesis and even theory and go directly to assertion,” as though for all the world she herself wasn’t about to do just that, or to write, three pages later, again about Calvin’s conception of the soul, “This is no proof. Be that as it may.”

200 pages on, in a sermon that plays the same tune in a different key, she straight-facedly declares, “If it is reasonable to say the brain is meat, it is reasonable on the same grounds, the next time you look into a baby carriage, to compliment the mother on her lovely little piece of meat.” One wants to set the book down gently and back slowly away.

Robinson also talks politics in these pages and correctly identifies any number of problems with contemporary culture in her home country, but the ways in which she does so (us vs. them thinking, paranoia, mischaracterization) turn out to be the very kinds of thinking she wants to critique. Her relationship with “my particular saint, John Calvin” is so intimate that there seems to be little room for the reader: we feel indecent intruding upon them. Like any number of her political foes, she maintains not only that the Constitution of the United States is a Calvinist document, but that democracy itself has a certain Calvinist flavor. That Calvin himself did not personally invent the institution she admits, but it is a mean admission and a grudging one.

Marilynne Robinson won most of her readers and all of her notoriety as a novelist. And it is because of the strength and the beauty of her novels that anyone would publish, let alone read and seriously consider, the arguments she makes in her essays. Before opening The Givenness of Things I would never have compared her bright books of life to the tasty lure of an anglerfish, but I will read them more warily in the future. That’s a loss. •