Only six miles from the Strip, taking I-15 northeast of downtown Las Vegas on the way to Apex, you are suddenly surrounded by the Mojave. As if a vast space on the map had yet to be filled in, endless dusty plains nestle beside the Black Mountains with little on the horizon but scrub and yucca, pebbly arroyos, a spare barrel cactus, creosote, and the occasional tumbleweed. The divide between metropolis and wilderness is stark.

Everything on the way out to the Nellis Dunes is redolent of the prison–industrial complex. Adjacent to the dune fields, there’s the Las Vegas Motor Speedway with its NASCAR and drag-racing tracks, an RV park, a small gambling establishment, as well as Nellis Air Force Base, which boasts more squadrons than any other base in the U.S. Nearby, as well, are a gypsum mine and a trash collection service headquarters.

If the Vegas that most tourists see is a pure distillation of so-called free enterprise, all sizzle and spectacle, then this view of its periphery provides another vantage on the depredations of capitalism. It’s the truly ob-scene, the carnage that remains offstage from the city proper.

“Las Vegas,” as Joan Didion once wrote, “is the most extreme and allegorical of American settlements, bizarre and beautiful in its venality and in its devotion to immediate gratification, a place the tone of which is set by mobsters and call girls and ladies’ room attendants with amyl nitrite poppers in their uniform pockets.” It is gleefully predatory and naked in its fundament of avarice and vice of every kind. It’s a poor person’s idea of luxury. 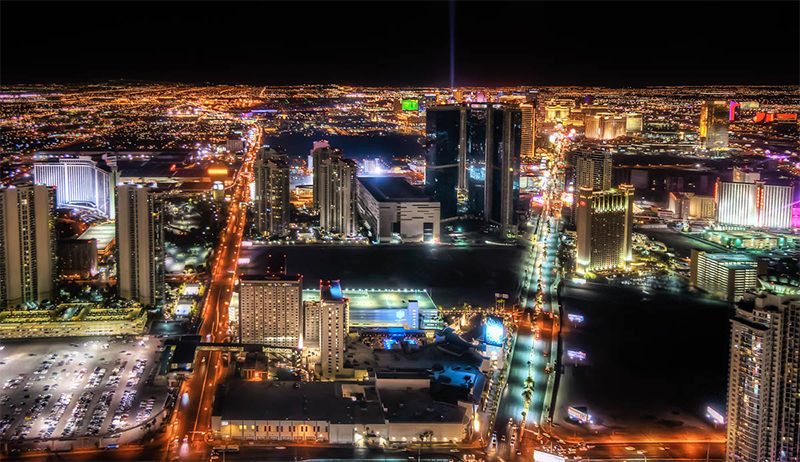 Whereas the casinos and shopping malls cascade with wattage, a tonic mix of brand names and booze, everywhere dripping with the promise of sex and the trappings of decadence, these empty industrial outskirts are the staging — and dumping — grounds that allow such a mirage to project itself like a miasma through the hotels’ eternal midnight. These dead zones hold the waste, human and otherwise, behind the magic curtain; this wasteland is both backlot for and blowback from the Strip’s outsized simulacra.

Earlier in the day, my friend Les and I left an academic conference at Planet Hollywood — the conference was the ostensible reason I came to Vegas at all this time — and walked out onto the hectic midday Strip. In the block and a half from Planet Hollywood to Flamingo Drive, I was spit upon by a deranged homeless man who screamed “faggot” at me then lurched away into the crowds, witnessed a purse-snatcher sprint down the street pursued by his victims, was passed by two showgirls in feathers and sequins cooling off beneath an underpass, and saw a man fall over on his face drunk.

I found myself surprised that the street promoters handing out cards on the Strip were not shilling escorts, as they had been wont to do for decades, but Lyft discounts. The so-called Uber economy had co-opted the tactics of the world’s oldest profession. The prostitutes now primarily advertise online while the ride share companies plug themselves face-to-face. Ride share logos were pasted to what seemed like every other windshield. Public transportation is almost nil in Vegas, global warming has conspired to send temperatures to boil-your-eyeball levels this summer, and city planning amounts to little more than cloverleafs, strip malls, and subdivisions. Car culture is not just dominant but necessary to survive. And if you own a car, you have a hustle. 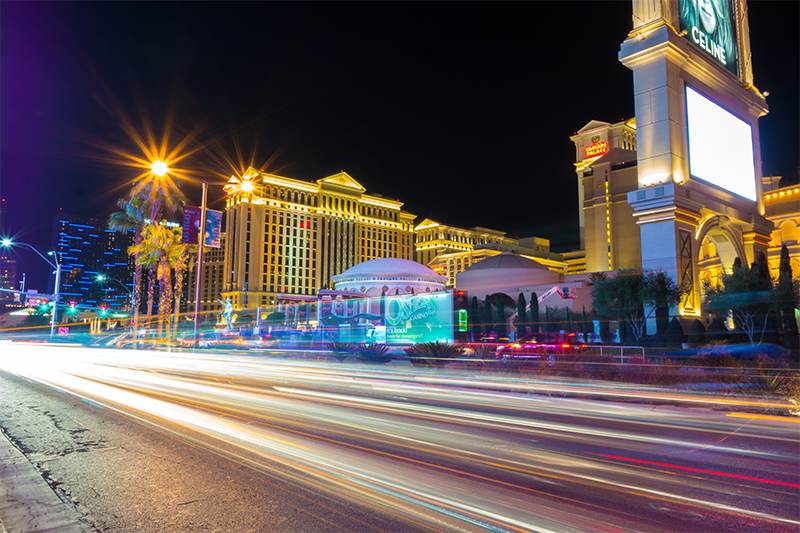 Me, I’ve never learned to drive. I left home at 16, eager to escape my small Delaware town. After college, I lived in New York City. I’m glad I now live in Flagstaff, Arizona, since ironically it’s a town small enough that one can get around on foot or bike.

I also don’t have a cell phone. When the network in my area stopped supporting my track phone — an old flip model — a year ago, I realized I had to choose either upgrading to a smartphone or simply doing without. As a writer, I spend a lot of time on the computer anyway. But I don’t want to feel tethered to the internet when I’m away from my laptop. I’m not on any social media, as it seems an enormous waste of time. And I’ve become skeptical of how phones will monitor one’s whereabouts, purchases, and other personal information. Besides, I used only a handful of my minutes in any given month and rarely texted. The minimum fees would be absurd for how little I picked up my phone.

While I get by just fine at home, in Vegas the ubiquity of cars and phones hits me hard. I’m suddenly an outsider. I’m divorced from the infrastructure upon which an entire culture is predicated. If the Eisenhower Highway Act in the ’50s paved the way for white flight to the suburbs, we may have recently undergone a similar phenomenon in the virtual realm. The infrastructure of cell phone towers and alternative internet sites has created a new “information highway.” As the recent election made clear, there’s an increasing segregation in the demography of sites and apps and news sources. Historians may one day see it as the second great white flight.

Cars and phones. Both promise to connect us while pushing us further apart.

The casinos appear a towering emblem for the narcotized fog our economy sponsors, their smoky labyrinths of chirping slots gobbling up tokens from glassy-eyed vacationeers. Everyone in this soporific environment requires alcohol, coffee, energy drinks, or harder substances. Most people totter from being drowsy to being hung over. I pass an older lady who slumps in her chair asleep, a little drool on her T-shirt, her face illuminated by the twitchy glare from the machine. Another elderly lady takes puffs of her cigarette while pulling down on the lever with one hand, a cocktail in the other, her oxygen tank pumping through her nose tubes. Around her, people keep swiping their glowing screens, whether phones or slots. The open container laws mean people can tote around enormous football-shaped mugs of beer or three-foot long Hurricanes as they stumble from one casino-nightclub-hotel to another. Not that there’s any substantial differences between these self-contained, all-inclusive “resort complexes.” 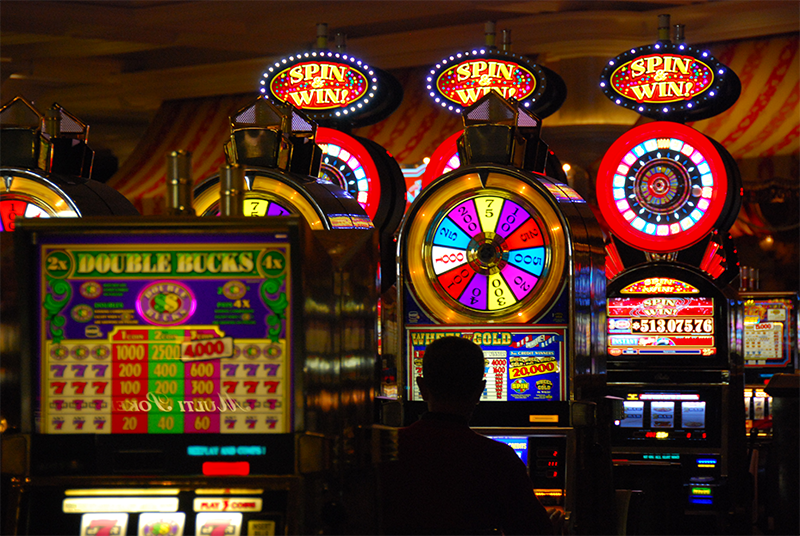 20 of the 31 Strip casinos are owned by either MGM or Caesar’s. Many of the others are owned by billionaires such as Wynn, Icahn, Trump, or Adelson. In this, too, the casinos exemplify the global consolidation of wealth to an ever-narrowing range of multinational corporations and tycoons.

The shipping depots and prisons and air bases and landfills and scrapyards are corollary to the same system where the odds are always in the house’s favor. Strip mines and strip malls and strip clubs — they all blur together. They’re all designed to strip one of a hard-earned buck if not in fact common resources and community.

At dinner the previous night, my friend Les asked our waitress how she liked Vegas. “I hate it,” she confessed.

“Well . . . can I tell you something? I was in prison, three years. Now I just work. I work seven days a week so I stay out of trouble. No parties, no time to get into anything like that. Keeping myself clean.”

The options she lays out seem bleak. Work, prisons, parties: the citizens here lurch from one to the other. Work, I think, is its own prison. As is the “party” lifestyle that she now studiously avoids. And all alike profit the men — and they are almost universally men — on top while everyone else is lost in the grind. Like a dune mound that’s torn down grain by grain until one day the last grain drifts away in the wind.

Arriving at the dune fields with my friends Les and Megan, the twinkling lights of Vegas flood the valley in the distance like a molten bowl of glitter. The city might as well be a far-off galaxy. Here, the overwhelming fact confronting one is not light and illusion but rather dirt and erosion. The terrain is a martian dustbowl: all crevasse and crater. The barren fields are scattered with shotgun shells and broken beer bottles, mattress springs, shrapnel from fireworks, rusted-out car parts, and metal discard. The dunes are crumbly patches of gravel and powder. ATV.s and buggies have carved rutted tracks like arabesques throughout. The ground itself is striped, strapped, and disintegrating.

Still, one can’t help but notice how beautiful it is, this desert. The otherworldly undulations of the empty dune fields reveal gradations of cyan and butternut, rosewood and merlot, crepe and mocha. A substrate of conglomerate adds texture where the topsoil has been scraped away. Beyond, a silhouette of mountains looms against the twilit sky. Tonight, a full moon, pockmarked and incandescent, hovers above a cutout dirt roadway atop a crest. The sands of time — the phrase seems palpable here: after all, given time, we all become sand. Yet this place is quiet, peaceful, elemental. 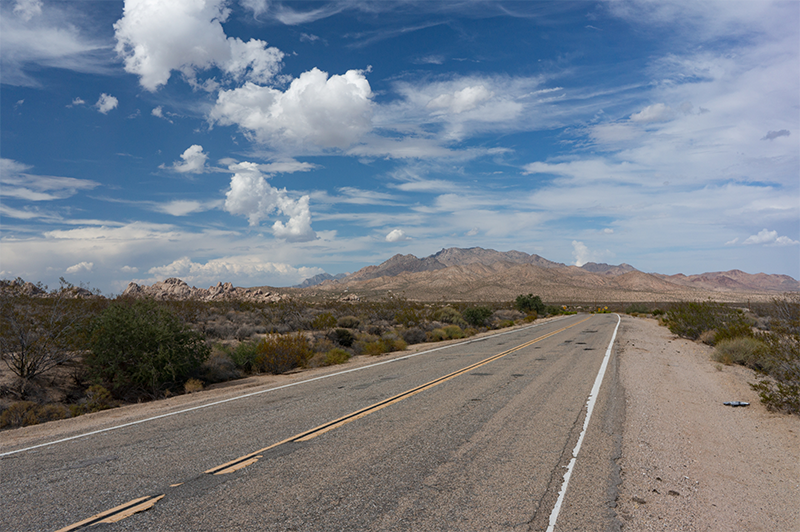 Perhaps not for long. Senator Heller (R, Nevada) has proposed that the federal Bureau of Land Management cede 10,902 acres of these dune fields to Clark County for an “Off-Highway Vehicle Recreation Area.” A giant ATV racing circuit will soon supplant the dunes, according to the bill. The supposed “benefits” of the plan include “improv[ing] air quality by minimizing dust levels with the watering of track facilities and development of hard surfacing on the park trail loop, staging and parking areas.” Basically, the plan is to pave over large swaths of these dunes and to waste precious water on the arid dirt. Another “benefit” would be to attract more ATVs and tourists, which would, of course, further erode the dunes. So much for the critically endangered Las Vegas Bearpoppy, which the plan dubiously claims will receive increased protection.

I hike on foot while a few four-wheelers careen and sputter somewhere behind me. I climb a steep trail up a blind hill. An RV is parked near the pull-off where I entered, and, once on the ridge, I spot a cluster of other campers in a small valley to the north. It looks as if they have a bonfire going. I scribble a few lines in my pocket notebook. I hear one of the four-wheelers rev and chortle over a switchback.

From the vista, I reflect that an estimated 300 million curies of radiation have floated downwind from Nevada’s nuclear test sites into the area. I glance back at the ever-glowing city, a dazzling profusion of light that blots out the stars, then head once again into its liquidating cauldron. •

Supported in part by a grant from the Arizona Commission on the Arts which receives support from the State of Arizona and the National Endowment for the Arts.