Las Vegas is unwalkable in so many ways, and in so many different kinds of ways, one could make a solid argument that it should be preserved forever as Unwalkable National Park. This would ensure that future generations would never forget how cities should not be designed.

Where to start? Why not the casinos. Yes, one gets around them by foot, so they’re by definition walkable, but they’re also famously designed to disorient and confuse walkers the moment they enter, both in time and space. Signs are rare and windows are nonexistent. You rarely know where you are. When you walk through, say, the MGM, what’s ahead of you and behind you look exactly the same — it’s a crazy hall of mirrors. It confounds every cognitive mapping approach, from using landmarks (didn’t I just pass a slot machine with sexy mermaids?) to keeping yourself oriented to the north, which is disrupted by the frequent jogs left and right.

Out on The Strip itself, walkers are corralled and contained with jersey barriers and herded onto massive, clunky pedestrian overpasses. The overpasses are also in theory pedestrian-friendly — in fact, they’re reminiscent of the “Highways and Horizons” pavilion at the 1939 New York World’s Fair in Flushing Meadows, which depicted what the New York Times called a “pedestrian heaven” and a “city of the future where the pedestrian can walk without fear of sudden death and the motorist can always find a parking space.” 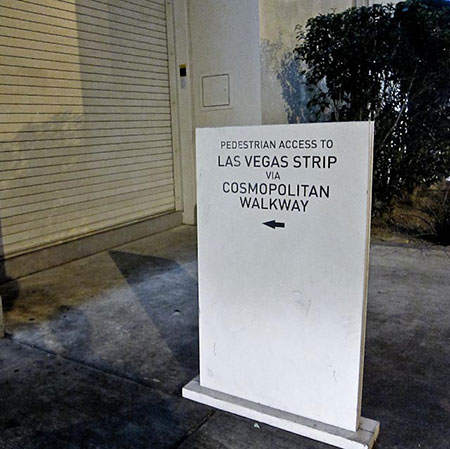 Famed designer Norman Bel Geddes, who envisioned “free-flowing movement of people and goods across our nation,” created the world-of-tomorrow display. The most radical element of his vision? Segregation of transport — cars would move at high speeds on one-way roads freed of intersections and other hinderers of traffic; pedestrians would move freely along their own elevated and separated network of pathways.

It’s true, you can cross Las Vegas Boulevard without fear of sudden death when using an overpass. But the simple act of crossing the street often requires walking hundreds of yards away from the direction you want to go before doubling back, then huffing up and down unforgiving flights of steps — sometimes four flights each high enough to clear a tractor trailer if you’re making a diagonal cross — the equivalent of visiting a five or six-story walk-up.

And for what? To attempt to reduce friction for car drivers — in actuality, a vain attempt to untangle the endless knot of traffic. Pedestrian overpasses are never designed for pedestrians, no matter what they’re called or what boosters say. They’re built to make it convenient for cars.

Beyond The Strip are shiny, new suburban neighborhoods that sprawl in seas of endless twinkling lights at nights, each unwalkable in their own way. The new neighborhoods tend to consist of a set of elaborate cul-de-sacs adjacent to another, the whole affair often surrounded by cinderblock or iron fencing with no gates or connections between them. Cars and walks alike have to enter and depart through a central portal.

My stepdaughter lives in one such community, in Summerlin. Her house is literally a few dozen yards from the Western Belt Pathway — a bike and walking path which, in bits and pieces, runs eight miles downhill to the strip (it’s a helluva of a bike ride — try it some day). But wander over from her house — a concrete wall blocks it. So to get to the path, she needs to walk out through winding streets of her subdivision to get to the main road, and then walk along two four-lane roadways and out and around sizable school grounds before she arrives at the path. It requires over half a mile to travel maybe linear 50 feet. 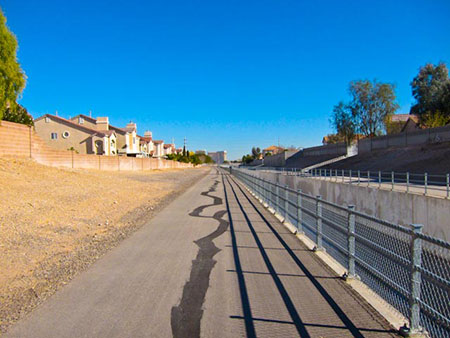 Other housing developments are similarly fortified — with imposing, portcullis-free walls making it all but impossible to walk to the grocery store, never mind to walk back carrying plastic sacks. Some of the new communities are justly proud of their new recreational pathways. Summerlin, for instance, has its paved and landscaped Cottonwood Canyon Park trail, which descends a wash and is quite lovely in the morning light.

“Those types of areas are good for pleasure walking,” Timothy Bungum, a public health professor at UNLV, told the Review-Journal last year. “You can’t get to any destination, but they are pretty good for taking a stroll.” Las Vegas is a city without connections.

And those who do dare to walk to the store for a bottle of aspirin are taking considerable risks. Las Vegas is tied with Riverside, Calif., as the fifth most dangerous city in the nation when it comes to pedestrian deaths per capita. (By the way, the top four are all in Florida.)

The notion of making Las Vegas more walkable seems almost laughable — about as achievable as making San Francisco flat. So what lessons can be learned from Las Vegas for those who’d love to see a more walkable future for their own cities?

The first requirement for true walkability is density. Las Vegas was built around the automobile, and for the most part is spread out as if someone tossed a cup of rice in the air. But there’s the bleached skeleton of a denser, more walkable neighborhood in the old, vestigial downtown. This was more or less abandoned when the economic energy moved to The Strip, although some intermittent efforts were staged to revive it over the years, in part by making it glitzy like The Strip (think: LED light shows and a zipline.)

Tony Hsieh, the 39-year-old, blue-jeaned, untucked-shirt-wearing CEO of Zappos, the $2 billion online shoe and apparel company, is getting considerable press for his decision to move his corporate headquarters downtown, relocating it from the bland and beige corporate buildings in Henderson, which is a bland and beige suburb of Las Vegas. (Hsieh bought the old city hall and is converting it to Zappos central.)

He’s doing all this not because he’s driven to create a more walkable community — that’s just a byproduct. He’s doing it because he wants more “collisions” as he puts it — he’s a firm believer that density and design can yield chance encounters which can yield problem-solving and creativity, and you can’t have chance encounters if you’re cocooned in a car transiting dully between work and the Starbucks drive-through and the Sam’s Club parking lot on the way home.

A lot of city officials actually appear to be on board in this effort to create density. I spoke with Mayor Carolyn Goodman last year, and she clearly got it. “On the Strip you walk form place to place, you have a destination,” she told me. “But the whole downtown area is incorporative — I’m making up a word here — incorporating everybody in a experience that’s unique and young and energized.”

Hsieh’s putting his money where his mouth is — he’s invested $350 million of his own money to lure more business downtown and help finance urban essentials, like small, independent restaurants and day care centers and schools and community workspaces, where entrepreneurs can open up a laptop, call it HQ and have chance encounters all day. He figures that if he can craft a welcoming environment in which bright minds interact constantly, he won’t have to worry about trying to figure out the next cool technology and keep his company from being left behind. He’s building a platform — a walkable, compact city that will serve as a substrate for a hive mend that will generate the next big idea. That itself is a pretty big idea.

While in Las Vegas, I had coffee with Courtney Coughenur, a doctoral student at the University of Nevada Las Vegas who’s writing her dissertation on Las Vegas and walkability. It’s not a pretty picture, she admitted. The city boomed during the auto age, when builders built cul-de-sacs because they gave buyers the impression of personal security. “And now, it’s almost impossible to repair,” she said. ”Once people decided they wanted walkable, there was no money to build these communities.”

But step by step, Las Vegas is tackling small things that might be taken for granted elsewhere — like walk signals that allow crossing four ways at once, sending a quiet message that walkers matter. And the city’s last two mayors have embraced the Complete Streets movement, which calls for designing streets that create an inviting environment for walkers and biker, not just the rapid movement of cars.

Even some of the casinos are starting to see the light. Las Vegas CityCenter — a 76-acre resort that takes as its theme urban life, only sleeker — is less confusing and friendlier to walkers than many predecessor resorts. And early this year, MGM Resorts International announced that it would spend $100 million to build a park and promenade outside its New York New York and Monte Carlo Casinos, abandoning the longstanding casino mission of keeping patrons cooped up and feeding coins into clanging video machines. The new park is slated to open next year. While it’s uncertain how walkable it will make that part of The Strip, it’s a step in the right direction.

“If you could win a few little battles — like opening up a concrete wall to a grocery store — I think it would make a difference,” Coughenur said. “Small battles, one at a time. You’ve got to change the mindset.” • 16 September 2013