In 1952, a local salesman named Ted Rogich decided that Las Vegas needed a roadside sign that would welcome visitors to the city. In the postwar years of the American Southwest, highways plowed through long open stretches of sand. You could drive right past a town, even Las Vegas, and not know it. Las Vegas had a sign heralding everything, Rogich said. Everything except itself.

When Rogich approached designer Betty Willis with his idea, she was a rare woman in the new industry of neon. The two agreed — a Welcome sign for Las Vegas had to be flashy, glitzy, something that really proclaimed “Vegas.” The eventual design for what would become the city’s great landmark is well known: a 25-foot-high “Googie”-style sign covered in blinking silver dollars and mismatched fonts, lined with yellow lightbulbs that chased each other around, topped with an exploding atomic star that cried out to every car passing north along Highway 91, “Welcome to Fabulous Las Vegas.”

Over the years, the Welcome sign has become much more than a greeting. Tourists have fallen in love and married by the sign. They have risked their lives running across the highway just to get a picture. Betty Willis became a landmark too, nearly indistinguishable from her sign. Every so often, over the years, someone would lure the elderly Willis from her home and prop her in front of the Welcome sign next to some showgirls for a photo shoot. Willis – who died last month at the age of 91 – seemed surprised that her sign was still there. “I expect all my signs to go down before I do,” Willis once told an interviewer. “I’m a tough old bird. I’m not going until I’m ready.” But then she said, “Anyway, that sign can stand on its own. It doesn’t need me around anymore.”

As a child in Las Vegas, I never saw the Welcome sign until I was old enough to leave town. It existed for me in picture postcards and movies, like it did for most other people. In movies, it was an incandescent 25-foot-high hostess of white neon and steel. In pictures, it was colorless and dim. Standing in a buffet line at a casino with my family on Tuesday nights, I would look at a photo of the sign hanging on the wall:

And I would wonder, ”Am I living in fabulous Las Vegas?”

The Welcome sign stands in the town of Paradise, four miles outside Las Vegas city limits, near the huge stone columns of the old McCarran Airport and the bright green hologram of the Bali Hai Golf Club. The sign does not face Las Vegas, but rather looks away. So, if you live in Las Vegas, and you want to see the sign, you have to leave the city. You have to get in your car and head south out of town, turn around, and come back in. If, for some reason, you find yourself at the south end of Las Vegas Boulevard, all you will see is the sign’s backside suggesting you DRIVE CAREFULLY and Come Back SOON.

It makes sense that the great icon of Las Vegas is not actually in Las Vegas. Most cities keep their icons within city walls for the benefit of its citizens. Any Los Angeleno standing on the corner of La Brea and Hollywood Boulevard can see the HOLLYWOOD sign. The Eiffel Tower can be viewed from all over Paris; the Kremlin is in the heart of Moscow. What makes the “Welcome to Fabulous Las Vegas” sign true to Las Vegas is that it exists mostly for visitors. 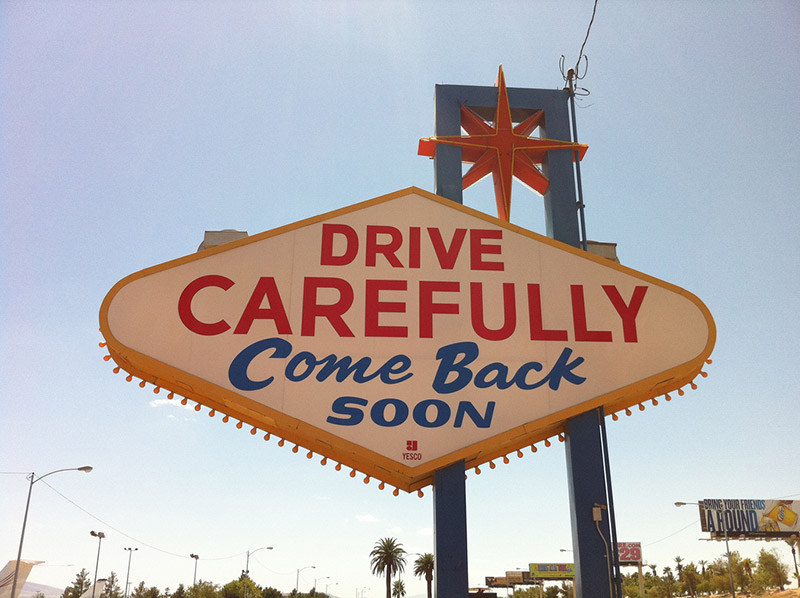 The Las Vegas of my childhood was a town of pilgrims and passersby, and even those who took up residence hardly believed they would stay for long. Las Vegas tourists visited a parallel city to the Las Vegas of its permanent residents, the way ghosts live alongside the living. Like ghosts, the residents of Las Vegas watched the tourists without the tourists knowing. But the two groups had one thing in common. Neither the tourists nor the residents were ever really in Las Vegas. In Paris, a Parisian is one who has been born and raised in Paris. A “real” Las Vegas experience was transient, ephemeral. The more furiously anyone grasped at Las Vegas, the quicker it would change. Like ghosts, the residents of Las Vegas pitied the tourists but envied them too. The tourists could pretend that the city they’d visited was “the real thing” and that the real thing was “fabulous.”

When Betty Willis designed the Welcome sign in the late 1950s, fabulous was a superlative that meant terrific, marvelous, legendary. “We thought the town was fabulous,” Mrs. Willis explained to The New York Times in 2005, “so we added the word.” “It was a word a whole lot of people liked,” she once told The Las Vegas Sun, “and we liked it, too.” But fabulous also means mythical, unbelievable—a made-up thing, a fable. Welcome to the city of make-believe, says the sign, whose story is unreliable. Welcome to the city that will never fall to ruin because atmosphere does not decay.

Perhaps the most surprising fact about the “Welcome to Fabulous Las Vegas” sign is that it remains standing. Erected in 1959, by the 1970s, the sign was — in ever-changing, ever-updating Las Vegas — an anachronism. Other signs designed by Betty Willis have been scrapped or put to rest in abandoned lots that residents have turned into burial grounds for neon: the medieval hatchet of the Normandie Motel, the sign for the old Mint casino which was absorbed by Binion’s Horseshoe in the 80s. No building, no statue, no landmark in Las Vegas lasts very long. In 1980’s Las Vegas, for instance, a landmark dating from the 1960s was tantamount to an ancient ruin. Even “Old Nevada” is a reconstructed mining town of saloon facades and wheelbarrows built for the purpose of teaching local children history. That the Welcome sign still stands makes it an icon that is also an anomaly. A true Las Vegas landmark is one that explodes, that is razed to the dust it emerged from. Las Vegas is a monster bred to eat itself, an ouroboros devouring its tail, a phoenix that must die again and again so that it can be reborn.

The only way to see the Welcome sign, if you live in Las Vegas, is to get in your car and leave. Then, you have to turn around, and return to the city again. •