This month marks the 75th anniversary of Walker Evans book American Photographs. The collection of 87 images, selected by Walker himself from the larger exhibition at the Museum of Modern Art in the fall of 1938, established him as a serious chronicler of the American scene as well as a skillful and lyrical photographer. This year, the museum has reissued “American Photographs” and has mounted a slim show of images from the original exhibition.

Evans’ photographs are so often just fragments of a scene, capturing moments of quiet, abandoned decay. We encounter a heap of model-Ts rusting in the field, deteriorating movie posters, the actors’ peeling faces revealing the weathered walls underneath, a lumpy and rusting bed crammed in a tiny airless sharecropper’s shack. Or stare at the interior of a barbershop, walls covered in newspaper, its wide velvet upholstered chairs worn and tired like abandoned thrones. Evans transformed this space so iconic of social interactions into the silence of a forgotten cemetery.

We also encounter broad views of Northeastern mining towns, their houses tiny and lost, their streets, from a distance, look nearly empty. In another image, rows of worker houses crawl down a hill with monotonous beauty. There are the abandoned plantations of the South, the tall grasses nearly swallowing the sturdy columns. Next we see a number of stark and simple Victorian porch fronts, quaint and equally lifeless. People do emerge in these photographs, often in close intimate encounters amidst these landscapes of ruin. But even they seem damaged and isolated in front of Evans’ camera. They are surviving at best.

“I think the book is atrocious,” complained Ansel Adams in a letter to his friend Georgia O’Keeffe upon receiving a copy of American Photographs. To fellow photographer Edward Weston, Adams declared, “Walker Evans’ book gave me a hernia. I am so goddam mad over what people from the left tier think America is.” There were precise differences between Adams’ majestic and unspoiled natural scenes of Yosemite and the quiet decay of Evans’ America. As Evans biographer Belinda Rathbone has noted, the vision of America that Evans captured (and that MoMa promoted) was, for Adams, an “insult to his national pride.” These images were competing ideas of America set amidst the later gasps of the Great Depression. Adams’ scenes of Western landscape as beautiful symbols of natural (and national) resources and expanding possibilities, set against Evans well framed moments of lived and ruined realities.

The current show displays 60 images from that original 1938 show, and sets it within a small gallery space surrounded by post-war American painters. The placement was intentional. As the show’s curators note, staging Evans works from the late 1930s amidst paintings by Robert Rauschenberg, Jasper Johns, Jackson Pollock, and Andy Warhol “underscore the continuation of prewar avant-garde practices in American and the unique legacy of Evans’ explorations of signs and symbols, commercial culture, and the vernacular.” But this juxtaposition leaves a gap. What those painters created was a vitality and energy and even an irony of post-war America that is utterly lacking in Evans’ photographs. 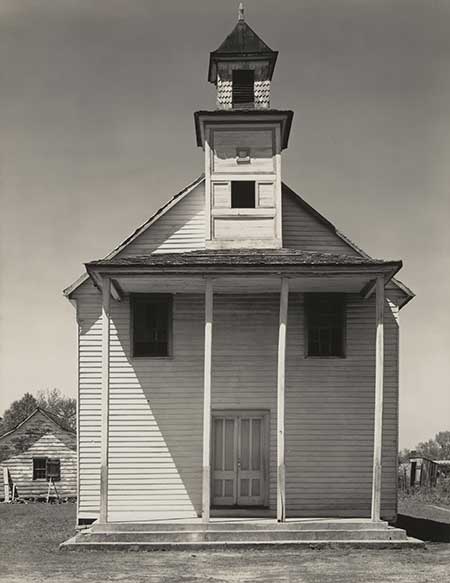 Looking at American Photographs today, Evans’ images exude a longing and melancholy for something lost. They are relics of a past, as much today as they were 75 years ago. They are decrepit sharecropper porches, ornate Victorian architecture, and decaying southern verandas. They are hauntingly empty small-town street corners and portraits of people who seem to have no place to go. There is in American Photographs no modernist romance of a dynamic future, no awe of machines or the possibilities of the future that were so often modernism’s compelling allure. Instead we are left with a certain absence that is both material and psychological. American Photographs remind us that modernism was also heaped in a kind of creative longing for all that was disappearing.

“Here are the records of the age before an imminent collapse,” wrote Evans friend the art critic Lincoln Kirstein in his accompanying essay to the 1938 book. Linking Evans images with that of the desolate and destroyed scenes of Mathew Brady’s post Civil War south and Eugene Atget stark, nearly empty streets of a 19th century Paris in flux, Kirstein praises these photographs in their abilities to conjure psychological realities that “testify to the symptoms of waste and selfishness that caused the ruin” of the Depression. Evans’ vision was shaped in large part by his time in Paris in the late 1920s, where he learned to discard his midwestern prohibitions against sexual and aesthetic pleasures (artists were suspicious figures in the young Evans’ household). But he also learned the pleasures of staring, a behavior his mother held to be deeply impolite. “I remember my first experience as a café sitter in Europe. There is a staring that startles the American,” he related some years later, adding that he gained from that time an ability to “stare and stare at people, shamelessly.” In Paris he perfected his skills at observing that would eventually shape the compositions and framing of his photography. He studied Baudelaire’s ideas about the aesthetic and poetic potential of everyday scenes. He read Flaubert to grasp the melancholic tenor of realism. What Evans learned in Paris was a way of looking from a distance, a voyeurism that was intimate. And this sits at the heart of American Photography: The pleasure of staring turned into the aura of longing.

This longing threads through many of the works in “American Modern: Hopper to O’Keefe.” Drawn from MoMa’s rich collection of American art, the show offers few insights into any idea of American Modern. Rather it is a show that resists making big claims or organizing the works into any interpretive contexts. We encounter an archive of landscapes and still-lifes that conjure a lost time and lost places. 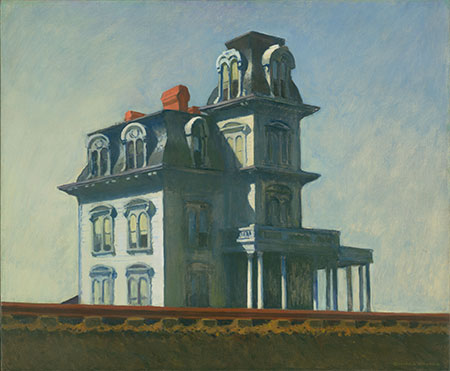 It was this loss that I was drawn to in so many works, starting with Hopper himself. Three of his paintings—“House by the Railroad” (1925), “Night Windows” (1928), and “Seven A.M.” (1948)—sit side by side in the first gallery, their perspective and play between exterior and interior presence reminds us of our own distance. It is difficult not to be a voyeur when you look at a Hopper painting. He forces us to stare through windows, always on the outside as we wonder what is happening to the fragments of lives he hints at beyond the windows.

In another work, “Mrs. Acorn’s Parlor” (1926), Hopper brings us inside, to gaze at the clutter and relics of a room empty of humans, a piano sitting quietly to the side. Like Evans’ barbershop, there is a deep sense of abandonment. For so many of Hopper’s street scenes and houses perched on hills, their uneven window blinds conjure a haunted sense of life: sensed but not seen. The wall text tells us that this painting stands as a “symbol of an earlier time, out of sync with a quickly modernizing America.” The painting, in effect, captures what is disappearing. 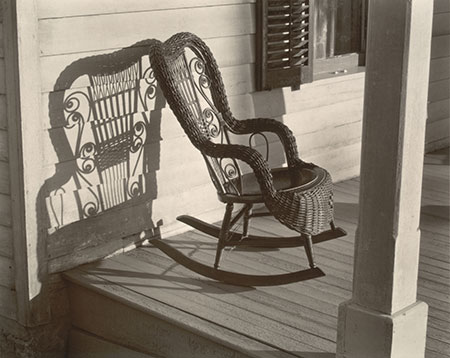 There are other moments of quiet longing in this show. Ralph Steiner’s photograph “American Rural Baroque” (1930) presents a wicker chair left on the porch in afternoon light, its intricate design cast in shadow on the white clapboard wall. In one sense it is a study of light and texture, a quite lyrical moment of rural simplicity. But look more deeply, and it too bristles with its emptiness and isolation. You start to see these qualities everywhere. In Ben Shahn’s “Handball” (1939) the burdening whiteness of the wall turns the players, distinct and isolated as they are, into fragile figures. Similarly, the daunting walls of Charles Sheeler’s studies of barns in Bucks Country feel nearly sinister. Paul Strand’s “Red River, Ghost Town, New Mexico” (1931), a portrait of a simple decaying window, is echoed in Georgia O’Keeffe’s “Farmhouse Window and Door” (1929). Each window offers a contemplative flatness that conjures questions of what lies behind it.

Similarly, Bernice Abbott’s New York street scenes from the 1930s and 1940s (Abbott was one of the first to promote Atget’s work in the US) offer historically heavy moments of 19th century brick tenements and cluttered storefronts windows that completely ignore the verticality of the city’s modernist dreams. Even the crude and expressive works of Jacob Lawrence’s “Migration Series” (1940-41) present a daunting experience of men and women leaving something behind.

Or consider one of the first paintings you encounter in this show, Charles Sheeler’s “Self Portrait” (1923), which renders with realist precision the simplicity of a candlestick telephone, its cord wrapped around itself against the white frame of a window sash. Sheeler’s “portrait” turns into the sound transmitted across electricity. While the image is an ode to technology in its subject matter, it also hints as what gets lost in these gadgets of industry. We have become nothing more than sounds circulated through wires and metal.

In the introduction to the exhibition catalog, curators Kathy Curry and Esther Adler recall a 1930s article from Fortune magazine entitled “Vanishing Backyards” that documents with text and photographs not “the new America, its skyscrapers, its airplanes, its dynamos” but rather complains about the decay of an “America which remains unregenerated, its back porches and backyards, its ugliness and its waste.” Such ugliness was to be ignored, the article argued, for its static sense of the past. As the curators note, in many works in this show the absence that is felt is “accompanied by a twinge of nostalgia.”

Perhaps this nostalgia accounts for the selection of works that are so often caught between the present and the past. But there is more than mere nostalgia here. Call it the Detroit effect: Our fascination with beautiful images of the ruins and relics of grand theaters and libraries, of dance halls and department stores that were themselves part of modern America’s industrial progress. Those ruins, like so many of Evans’ Depression era scenes, turn progress into failure, and the future into history. Such scenes compel us to stare at places and people we would rather not look at. What both of these shows remind us is how longing, unfettered by sentimentality, can be a powerful creative and social force offering expressions of uncertainty against bold narratives about the future. • 18 September 2013