“Hey Dad, what do you think of this thing about Captain America being a Nazi?”

Long pause. This was not a question to be taken lightly. Depending on how my daughter felt about the issue, a wrong response could plummet the conversation quickly into an unintended, but nevertheless heated, argument. Such is the power of the modern superhero.

If you haven’t been paying attention (and good for you if you haven’t, you’re making the right life choices), the Internet had a — oh, let’s call it angry — reaction to the first issue of Captain America: Steve Rogers, when it arrived in stores last month. Why? Because that comic — written by Nick Spencer and drawn by Jesus Saiz — ended with the cliffhanger revelation that the one and only Captain America has all this time been a secret agent for the super-evil terrorist organization known as Hydra. 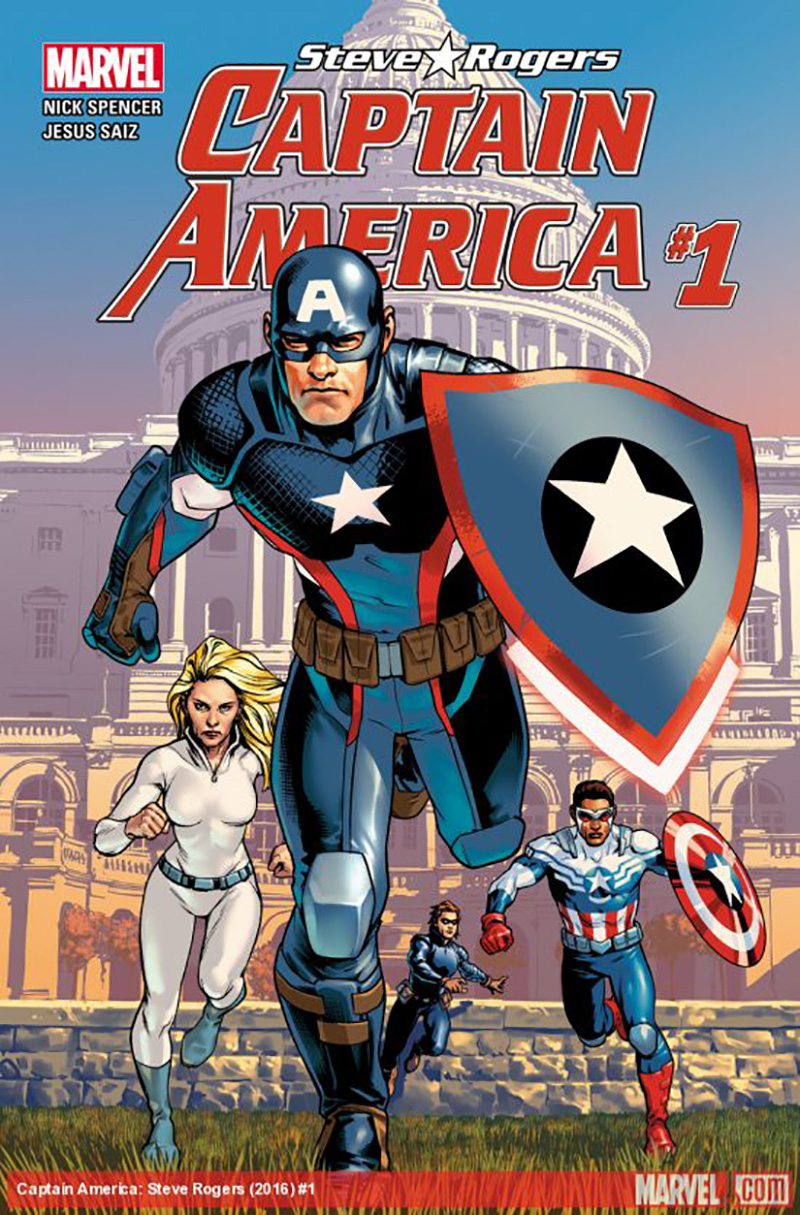 For longtime mainstream (i.e. superhero) comic readers, this seemed like yet another cynical attempt to juice up sales and garner a few quick headlines. From the Death of Superman in 1992 onward, Marvel and DC have found that seemingly irrevocable plot twists that change everything — killing off popular characters, rewriting a well-known backstory — are a great way to grab not just fans’ attention, but that of those outside of the hermeneutic circle of comics as well. And the need for constant, continual product means that at some point everything will inevitably shift back to square one so some other schlub can change everything yet again. If you’ve read Captain America’s comic book adventures for any length of time, you’ve seen him retire the mantle at least thrice, consider a run for the presidency, get killed and then resurrected, become addicted to drugs, turn into a werewolf — only to shake it all off and bounce back to basics with nary a scratch. Marvel editor Tom Breevort can swear up and down on a warehouse full of Bibles that this is not a clone, not an imaginary story, etc., but the one true Cap, and readers still know that deep down it doesn’t matter; it, like all superhero stories, will all get rebooted eventually — sooner if the fan reaction is negative enough. Retconning Steve Rogers’s back story so that he has ties to a global terror organization might come off as a crude, cynical, and tone-deaf tactic, but it’s also par for the course. 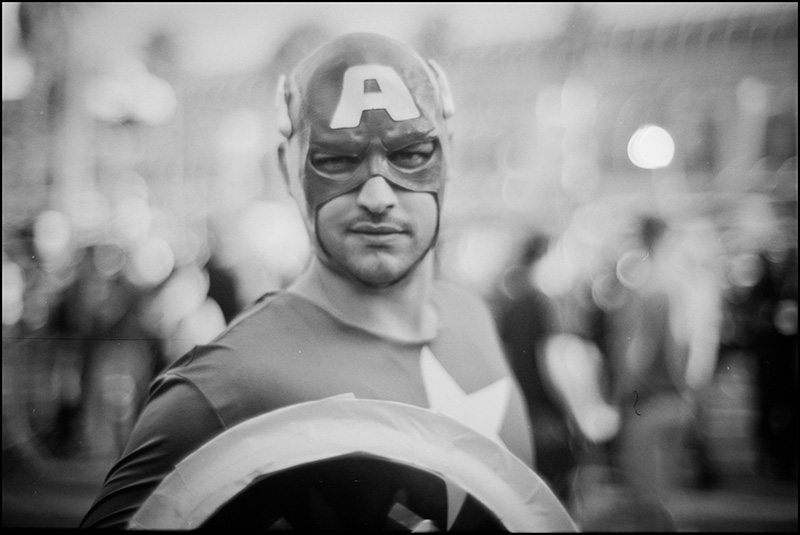 And yet people got genuinely upset about this comic. Internet reaction was far from kind, with Spencer and company reportedly receiving death threats and being accused of anti-semitism (Captain America’s creators, Joe Simon and Jack Kirby, were Jewish) and even homophobia (there’s a contingent of online fans anxious for Cap to come out of the closet and the running joke was they’d make him a Nazi first). Angry think pieces poured out of the blogosphere — some of them seemingly more upset over the matter-of-fact interviews Breevort and Spencer gave with the media than the actual comic.

To some extent the reaction could be blamed on the perpetual Internet outrage machine. It’s just the latest thing to get really, really upset about until the next thing that will really, really upset you comes along. You could also see it as yet another example of fan entitlement run amok. Marvel has promoted a chummy, clubhouse atmosphere with its fans since the ‘60s, and the advent of social media has certainly broken down a lot of barriers between creator and consumer to the point where an overly entitled sense of proprietorship on the part of fans can be imbued. (I should note though that though those who make this argument [see previous link] conveniently ignore how their own online behavior was far from sterling.) No doubt someone somewhere was also pointing the finger at those damn millennials.

But all of that isn’t taking the effect of Marvel’s wildly successful film franchise into account, nor the way pop culture fandom in general has grown and become more diverse in the past 20 years. As critic Tegan O’Neil pointed out, Marvel Studios has spent a good deal of time and effort positioning Captain America as one of the central figures in the Marvel movie universe, played by the oh-so-handsome Chris Evans (there’s a reason so many fans want to see him make out with his BF Bucky). Plus, the films positioned Hydra not as some oddball cult incapable of getting their act together (a la Spectre agents or the Cobra villains from G.I. Joe), but as an actual outgrowth of the Nazi party, spearheaded by the ultra-evil Red Skull himself. The Hydra of the Civil War film, for instance, isn’t just seen as a serious threat, but as an outgrowth of Naziism itself.

Then also take into account how the growth of the Internet, the manga boom of the early aughts, and the growing acceptance of fantasy and sci-fi tropes by the general public have brought more women and people of color into the comic book tent. Given all of that, and given the way issues surrounding racial, ethnic, and sexual identity loom so large in our culture at the moment, is it really that surprising that fans reacted so strongly to the notion that Captain America has secretly been a Nazi all this time?

Not that any of it matters. All of the angry discussion merely served to put an even larger spotlight on Captain America: Steve Rogers #1, and the comic quickly sold out. While it remains to be seen if the blow-up will have any lingering effect for the title or Marvel itself, in the short term the lesson seems to be that controversy sells. (At this point I should be fair to Spencer and company and note it does appear as though they are attempting to say something about modern terrorism and the way it preys upon lower socio-economic classes; it’s just being done in a decidedly ham-fisted fashion).

But if we really want to talk about cynicism and creative bankruptcy, there’s no better place to look than DC, which debuted their latest mega-series crossover event, Rebirth, around the same time that Steve Rogers came out. 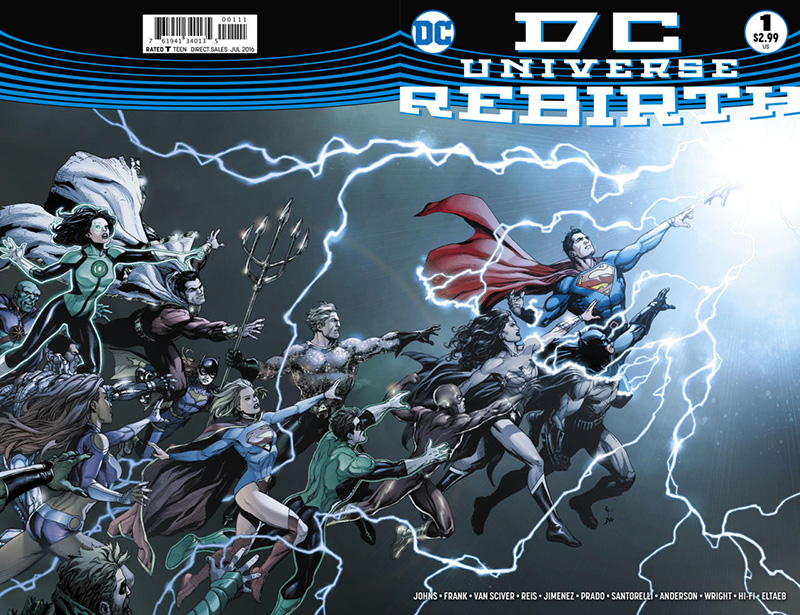 The series is designed as a serious reboot to the company’s superhero universe, a mere five years after their last big reboot, the awkwardly named The New 52. And if that short span of time makes the line sound like a failure, it should. Initial success and a few selling titles aside (most of them involving Batman) many of The New 52 titles have hit the sales doldrums or failed completely to the point where the company feels the need to hit the reset button once again.

But never mind all that. I’m not mentioning all this to try to explain why DC can’t sell a copy of Green Arrow. The central point of contention involving Rebirth comes at the end of the first issue, when writer Geoff Johns seems to set up a crossover between Batman, Superman, etc., and the characters from Alan Moore and Dave Gibbons’s critically acclaimed series, Watchmen.

I’m going to take a leap of faith here and assume you’ve heard of Watchmen. In the late ‘80s, when comics garnered a short-lived hip cachet, Watchmen was one of three comics held as a shining example of what the art form was capable of (Dark Knight Returns and Maus being the other two). A dystopian take on superheroes that at its heart was a sharp critique of the baby boom generation’s ill-conceived need to “fix” the world, Watchmen contained a level of artistry and sophistication that hadn’t really been seen prior, at least not in corporate-owned superhero comics, and its influence continues to resonate today.

More to the point, however, it’s also regarded as an important moment in the fight for creators’ rights. Many writers and artists that worked for DC and Marvel in those days wanted to have more editorial freedom and better financial treatment. The original deal was for DC to revert ownership of Watchmen to Moore and Gibbons once it went out of print. The comic’s success (it was one of the first self-contained series to be collected in a trade paperback) has allowed DC to keep it perpetually in print, effectively screwing over Moore and Gibbons. Moore has not had a single kind word for the company since then.

DC/Warner Bros. has doubled down on this effrontery in recent years by releasing first the tone-deaf Zack Snyder film adaptation and then a series of staggeringly awful and utterly unnecessary prequels bearing the Before Watchmen sobriquet. And now there’s Rebirth. Having Watchmen integrated with the DC universe might be an attempt by the creators to make some sort of statement on the series’s influence — good and ill — on modern comics. Or it might be a cynical attempt by the publisher to squeeze every last ounce of interest and goodwill from that particular stone. Either way it’s a gross disregard for both the original work and the people that made it, a reminder that everything in this industry comes down to feeding the fleeting thrill and grasping for the short-term dollar.

But creative bankruptcy is the least of DC’s problems these days. In the wake of the termination of longtime Vertigo imprint editor Shelly Bond in April, it was revealed that former DC executive editor Eddie Berganza had previously received several sexual harassment complaints from female employees and industry professionals. Berganza was not let go as a result of this but demoted to senior editor, underwent behavioral training, and kept in charge of the various Superman titles, an enclave where allegedly no women are allowed to work. The revelation brought forth a number of angry reactions and at least one serious call for DC co-publisher Dan DiDio to step down, but if I asked you which generated more coverage and outrage, this story or the Captain America reveal, what would your answer be? 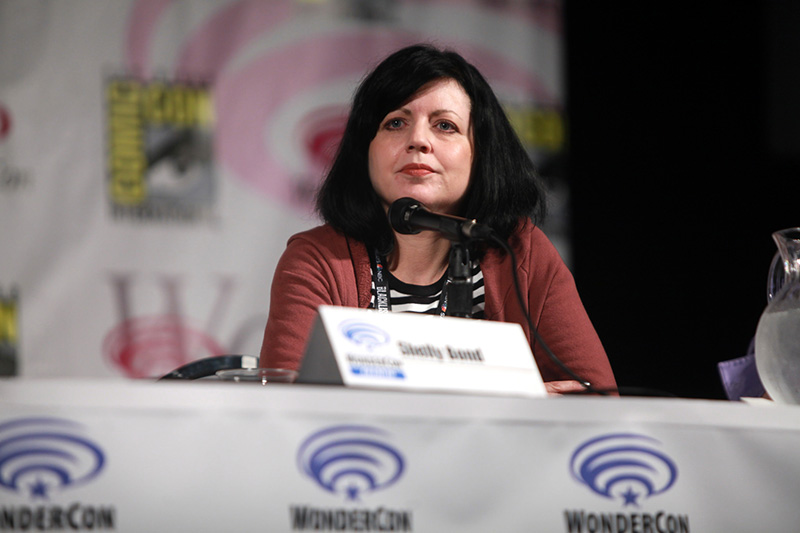 As much as I can be moved by certain storylines and characters (Maggie & Hopey forever, yo), it’s hard for me to understand the deep emotional investment some fans give to fictional characters and popular franchises, especially when those franchises are owned by a global corporation solely interested in getting you to spend as much cash on their products as possible. I’m more interested in who is writing or drawing Batman at a particular moment than what Batman is currently doing. I’m not saying this lack of investment makes me a better person or wiser reader. I do, however, find it to be a detriment when we continue to ignore or downplay the issues and problems creators and professionals face in an industry that has chosen to value the product over the human beings that make it.

Consider this, again, from Tegan O’Neil:

if Jack Kirby were suddenly alive and well in the year 2016 it’s much more likely that his first questions would be, how are creators being compensated? Are companies being held accountable for the thousands of abuses they have perpetrated and continue to perpetrate against creators across the industry? … Are the contracts better, more fair than simply a couple lines of fine print on the back of a paycheck? Perhaps most importantly, after being told that his creations were making billions of dollars for men and women who had never worked in any creative capacity in their lives, he would want to know whether or not creators and their descendants were being treated fairly by the companies who had stolen these ideas.

Those questions should be the ones we ask ourselves every time we invest our money in the latest superhero shenanigans that will change everything, this time for realsies. You can, of course, be upset about the fictional injustice and the real-life ones, but that sort of nuance can be difficult to parse when emotions run high. Just ask my daughter. She’s not talking to me right now. •