In a letter to a friend, Alexander von Humboldt (1769-1859) recalled how, as a child, he enjoyed “charming, graceful nature in such abundance” in the vicinity of Tegel Castle. Tegel, the Plattdeutsch word for “brick,” was still a small town northwest of Berlin on route to Hamburg in Alexander von Humboldt’s times. Here he spent the warm seasons of his childhood with his brother Wilhelm. Besides the castle, the family owned a townhouse in the center of Berlin, which was three hours carriage ride along sandy paths.

If you walk through the castle’s surroundings today, you can imagine him as a boy strolling around this romantic setting, perhaps listening to the hammering of a woodpecker, then walking over to the lake to enjoy the scenery. Nature made him curious and open to the world. This is where he started to collect plant specimens, stones, and insects, earning him the nickname “the little apothecary.” Objects of nature were his favorite toys. “Both brothers withdrew into their own worlds — Wilhelm into his books and Alexander into lonely walks through Tegel’s forests, great woods that had been planted with imported North American trees. As he wandered among colorful sugar maples and stately white oaks, Alexander experienced nature as calming and soothing. But it was also among these trees from another world that he began to dream of distant countries,” writes Andrea Wulf in her biography of Alexander von Humboldt The Invention Of Nature.

As idyllic as this sounds, it is known that Alexander and his brother Wilhelm (1767-1835) were quite isolated in the castle and that entertaining evenings were scarce. They lived together with their mother: Their father had died at an early age. Several governors, trained in the spirit of the Enlightenment, subjected the adolescents — who never set foot in a school — to a rigorous educational program. The brothers were treated like small adults, as was common at the time, and they were expected to accomplish sophisticated tasks. Ailing Alexander felt that he was in the shadow of his older brother, who learned more quickly. “Both characters evolved together and apart,” says Manfred Geier, the author of a double biography of the two brothers (published to date only in German). Alexander supposedly often spoke of the “Castle of Boredom.” “Here in Tegel I have spent the greater part of this sad life among people who loved me, who wished me well, and yet who showed no empathy towards me; instead they forced upon me thousand-fold constraints, punished me with solitude and conditions that I had to constantly adjust to and make sacrifices for.” The wish for distant shores was certainly rooted in this restriction. He said of himself that he felt restless and driven. 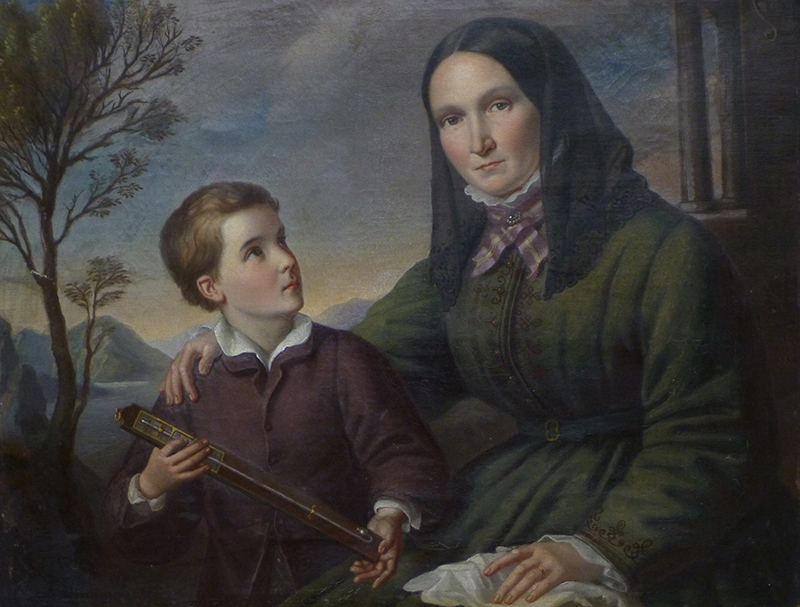 Amazingly, he later once wrote that “everything related to natural history and chemistry” had been neglected in his thorough education. However, he mentioned Ernst Ludwig, the family doctor, in praiseworthy terms: “He had a large collection of mosses and made an effort one day to explain Linnaean taxonomy to my older brother. Being already well-acquainted with Greek, he learned the names by heart. I pasted Lichen parietinus and Hypna (butterflies) onto paper.” It wasn’t until 1785 that the Protestant sons found their way into the circle around Moses Mendelssohn and the then thriving intellectual Jewish salons.

In the course of his life, Alexander von Humboldt always came back to visit Tegel Castle and see his brother, who preferred to live there in seclusion. And the castle is also associated in other ways with Alexander’s life: By ceding his inherited ownership of the estate early on, his brother gave him the resources necessary for his long expeditions. As an explorer of South America and Siberia, he found his way to world fame. In the United States, towns, counties, a sea bay, and Humboldt Peak are named after him. And this is despite the fact that he only spent six weeks on United States soil, on his return journey from Mexico to Europe in the summer of 1804. After he had arrived in Philadelphia, he made contact with Thomas Jefferson and was invited to spend a few weeks with him in Washington and at his Monticello estate.

But to return to the castle for a moment: When Alexander and Wilhelm spent their childhood summers there, the building had not yet taken on its present-day form. It was small, and the term “castle” seemed almost too grand. It was originally a manor house, which was built in Renaissance style in 1558. Elector Friedrich Wilhelm later had the country house converted into a hunting lodge. In 1766, the Tegel estate passed by marriage into the ownership of the von Humboldt family. The architect Karl Friedrich Schinkel then had it remodeled in classical style during the early 19th century, adding a tower to each of the four corners. In the clearly structured rooms, painted light blue here and lime green there, stand monumental Greek sculptures and heavy bookshelves that house the tomes detailing Alexander’s field trips. Byron’s and Adam Smith’s complete works can also be found, as well as works by Cook, Voltaire, Rousseau, and, of course, Goethe. The antique collection of Wilhelm von Humboldt, who spent some years in Italy, dominates the premises. The interior reflects the restrained aristocratic spirit of the philosopher and Prussian statesman, who mastered 22 languages and founded the Humboldt University of Berlin.

A few steps away from the graceful castle, there is a narrow avenue of lime trees that has existed since the 19th century. In the past, mulberry trees stood in their place, which were linked to attempts to breed silkworms and which lined the path to a mill. There are plane, ash, and chestnut trees in this dreamlike landscape garden. And on a long piece of meadowland, also towers the “Humboldt Oak.” It must have now stood there for half a millennium. It was once entwined with ivy and in its shade, grazing cattle once sheltered in the summer. The hollow stem of this pedunculate or English oak (Quercus robur), with its circumference of roughly 20 feet, is stabilized by iron braces. Several branch breaks have become the ruins of a tree. In the 17th century, even grapevines were apparently grown on the slopes behind the castle — they undoubtedly made a sour beverage. The scarcely fertile, sandy soil did not yield much. The adjacent forest was known for its different, even exotic tree species, that had been planted by botanist Friedrich August von Burgsdorff as far back as the 18th century: He sold his tree seeds all the way to North America and also imported various specimens from over there. Other elements of the garden only live on in memory. There used to be a small orangery at the foot of the vineyard, for example, where plays were performed. 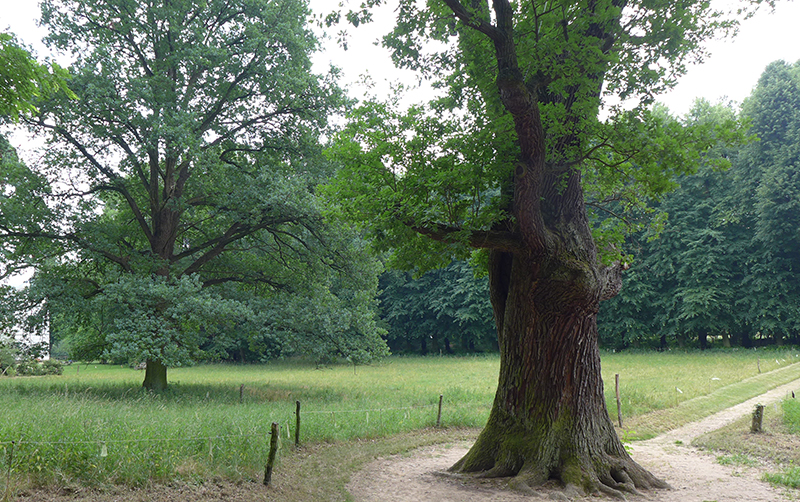 If you continue along the path through the Park to the west and the lake past a series of beehives, you eventually arrive at the family tomb of the Humboldts and their descendants, located on a hill slope. Here is where Alexander and Wilhelm von Humboldt also found their final resting place. It is a contemplative beauty spot, surrounded by a fir grove with a pillar, topped by a marble sculpture of a woman that symbolizes “spes,” or hope. The simple tombstones list the name, birth and death dates; inscriptions have been omitted. The silence is broken only by birdsong, because the place is largely protected by hills. The tomb is located within the line of sight of the Castle. 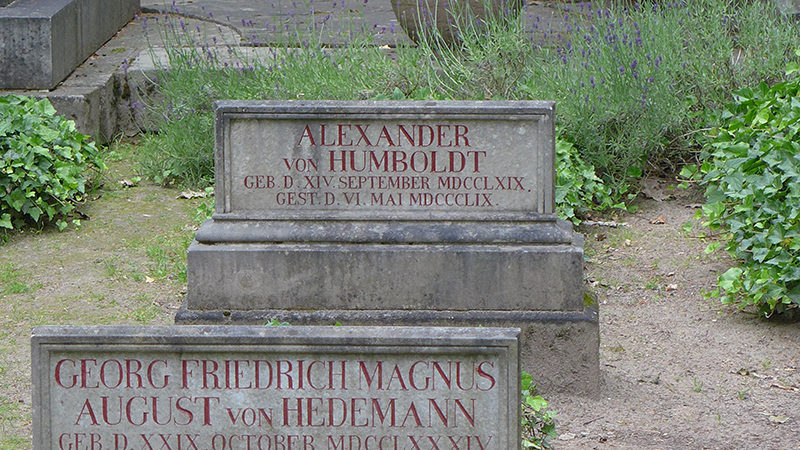 It is surprising how few people are attracted to this place on Berlin’s outskirts, which is enshrouded today by a peculiar magic. The writer Theodor Fontane wrote towards the mid-19th century: “Paris is no good without Versailles, London no good without Windsor, and Berlin without Charlottenburg — for the connoisseur it is unthinkable without Tegel.” •

Translated from the German by Lucy Renner Jones