It has been said that astronomy is a humbling and character-building experience. There is perhaps no better demonstration of the folly of human conceits than this distant image of our tiny world. To me, it underscores our responsibility to deal more kindly with one another, and to preserve and cherish the pale blue dot, the only home we’ve ever known.

The tiny dot — a period traversing the face of a solar flare — wasn’t much to behold. If you didn’t know where to look, you would miss it. As small as it appeared, even with the assistance of a telescope, this speck was the planet Venus traveling across the sun.

39 light years away from our solar system, seven new worlds that are part of the constellation Aquarius partake in a dance similar to that of Venus. They cross in front of a star that is 12 times less massive and much cooler than our own. This planetary system is called TRAPPIST-1, named for the telescope in Chile that first discovered three planets in the system. TRAPPIST-1 is so far away that we can’t watch this system’s planets crossing in front of their star, as we were able to when Venus visibly crossed between Earth and the sun. Instead, the sight is only visible to us through the marvels of astronomy research, which transcends borders, languages, passports, and the limitations of human vision in order to transcend the skies. Astronomy researchers rely on global collaborations to characterize planets like TRAPPIST-1 outside of our solar system that radiate the possibility of habitable surfaces and atmospheres. This saga is set against the backdrop of human dysfunction, when instead astronomy research’s ability to let us “see” planets farther away than we could have imagined should, Sagan exhorts, humble us and remind us to deal more kindly with each other.

Infrared (IR) astronomy is the study of the universe using light that isn’t visible to the naked eye. Rather, the light captured by telescopes is “infra” or “below” red light. In the space between galaxies, interstellar dust absorbs visible light and re-emits it as infrared radiation. Looking at infrared light can reveal things that using visible light alone can’t — like the extremely cold material that coalesces to become stars.

Dr. George Helou is executive director of the Infrared Processing and Analysis Center at the California Institute of Technology in Pasadena and deputy director of the Spitzer Space Telescope, a space-based observatory that contributed critical data to the discovery of this new planetary system. “Infrared astronomy opens a unique and rich window onto the universe,” Helou says. “[IR astronomy] uncovers new phenomena that challenge us to rethink the accepted knowledge of the universe.”

On September 19, 2016, the same day the United Nations held its first summit to discuss the movements of refugees and migrants, a team of physicists including Helou launched a three-week campaign to use the Spitzer Space Telescope to measure the amount of infrared light emitted by the TRAPPIST-1 star. A planet crossing between the telescope and the star casts a shadow, reducing the amount of light transmitted back to the telescope by measurable amounts and for specific time periods. This created dips in the amount of light “seen” by the telescope. Researchers studied light levels from the star long enough to determine which repeating light depressions matched particular planets, which totaled seven, and published their results in Nature in February 2017, shortly after US President Trump signed an executive order blocking refugees and citizens of seven countries from entering the U.S. Sagan’s distant image of our own tiny world and “images” of these new earth-like planets juxtaposed against our constant battles over borders vividly demonstrates Sagan’s “folly of human conceits.” 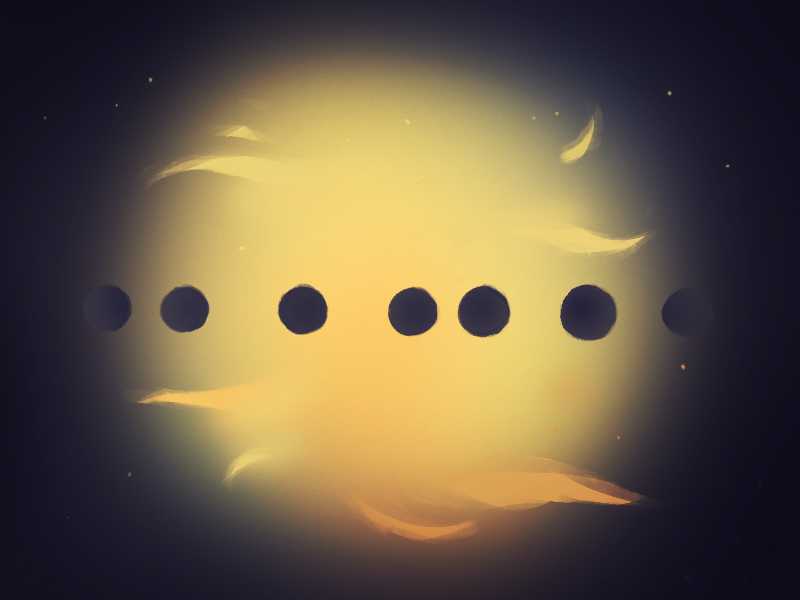 “Spitzer’s ability to observe almost continuously TRAPPIST-1 for 21 days was critical to deciphering the structure of that planetary system,” Helou says. He notes that studying planets beyond our solar system and the study of anything in space as a variable of time requires following the behavior non-stop as much as possible, which sometimes can’t be done from a single observatory. To accomplish this, Helou explained, international collaborations deploy a string of observatories in different time zones around the globe so the “sun never rises” and night-time observation can continue around the clock. The Global Relay of Observatories Watching Transients Happen (GROWTH) collaboration is one such example. Led by Caltech, this international collaborative gathers data on cosmic events in the first 24 hours of detection to answer explore how elements formed and what events generate gravitational waves. GROWTH operates 18 observatories in the northern hemisphere including in India, Sweden, Taiwan, Japan, Israel, Germany, the UK, and the U.S. When darkness falls on one location, observations continue from other locations that are still in the dark in order to provide nonstop monitoring of an event.

Spitzer’s infrared data combined with observations from ground-based telescopes around the world helped paint a clear picture of the new planetary system. After the initial discovery of the transiting planets, and around the same time that citizens of the United Kingdom seriously contemplated leaving the European Union through the Brexit referendum, researchers launched a global photometric monitoring campaign in May 2016 to learn more about the characteristics of the planets. This involved ground-based observations of the star from TRAPPIST-South telescope in Chile, TRAPPISTNorth in Morocco, the UK InfraRed Telescope (UKIRT) in Hawaii, the William Herschel and the Liverpool telescopes in Spain, and the South African Astronomical Observatory. Working with data from these telescopes helped determine what data from Spitzer alone could not: at least seven planets with sizes and masses similar to Earth revolve around TRAPPIST-1, and they have temperatures low enough to make the presence of liquid water on their surfaces a possibility.

Even before Helou began working on collaborative astronomy projects like TRAPPIST-1, he was well-versed in the idea that the pursuit of knowledge knows no boundaries. Entranced by the stars as a child growing up in Lebanon, his passion for astronomy and curiosity about the universe eventually catapulted him across the Atlantic to complete his Ph.D. in astronomy at Cornell University. He has devoted much of his professional career to using infrared technology to explore space, inspired by the 1983 launch of the Infrared Astronomical Satellite, which was a joint project of NASA, the Netherlands Agency for Aerospace Programmes and the United Kingdom’s Science and Engineering Research Council to survey the sky and measure the intensities of more than 200,000 infrared objects. Perhaps fittingly, his inspiration to pursue astronomy research was the result of a collaborative effort involving researchers across the world.

“Many research projects require teams, large and small, with diverse skills and interests,” Helou says. “When you are building a dream team for a given project of discovery, the best could be anywhere in the world, could belong to any culture or ethnicity . . . If we are limited to national boundaries, we simply won’t have our dream teams for pursuing the most important fundamental questions.” Scientists that worked on the TRAPPIST-1 discovery were from the U.S., Chile, the United Kingdom, Switzerland, South Africa, Saudi Arabia, and France. In order to make these kinds of phenomenal discoveries, people must move beyond the things that appear to divide them and instead focus on commonalities – in the case of astronomy research, this takes the form of a goal that lies literally beyond the stars and man-made divisions on Earth. 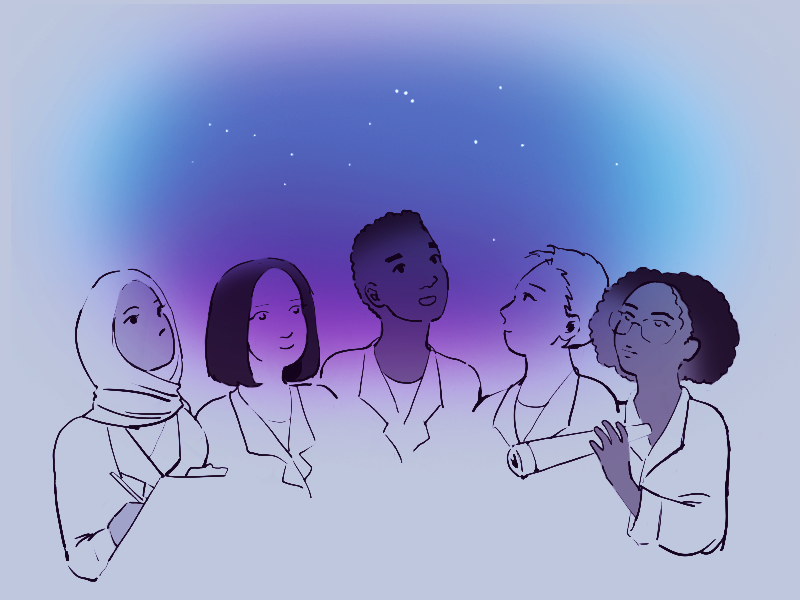 Physics and astronomy research also rises above manmade boundaries because of economics. The tools behind this research require major investments and equipment, like particle accelerators or IR telescopes in space. “International collaborations can mobilize resources not available to the research community within a single country, the U.S. included,” Helou says. In his own field of IR research, Helou describes the forward movement as the result of “an exemplary relay race” between NASA, the European Space Agency and the Japan Aerospace Exploration Agency, with each agency taking the lead on their own missions with contributions by others.

Helou isn’t alone in recognizing that tapping into resources from around the world is critical to advancing the field. The National Academy of Sciences, Engineering, and Medicine collaborated with NASA to develop a science strategy for the study and exploration of planets outside our solar system, detailed in a September 2018 report on Exoplanet Science Strategy. Among its recommendations are funding and building large ground-based telescopes, as well as launching an imaging mission to collect data on planets orbiting Sun-like stars. The report also honed in on opportunities for coordination between international partners.

Recognizing that “ground-based instrumentation is a strong point of European astronomy, and exoplanet science in particular,” the authors emphasize that working in tandem with existing large European telescopes will be beneficial to future NASA projects building the same, with open sharing of technology and ideas across borders speeding up technology development. Similarly, a launch mission to collect data on exoplanets involves such significant cost, lead-time, and technical complexity that collaborating with foreign space agencies, scientists and engineers is a logical, perhaps necessary path. Coordinating between international resources and even industries will be key to avoiding unnecessary duplication and consumption of valuable resources –a rather more practical and financial angle to Sagan’s reminder of humankind’s “responsibility to deal more kindly with one another.”

“Physics, like all science, is global in character, belongs to, and is the responsibility of all humanity. It is natural for the species as a whole to collaborate on understanding the fundamentals of the physical universe or the essentials of biology,” Helou says. Peering into the depths of space is a reminder that the differences that sometimes appear to divide us aren’t quite so substantial after all, or are “foolish and pointless,” as Helou says, especially in the face of fundamental questions like: Does life exist on planets orbiting other stars? Are there habitable planets in other solar systems? The remarkable ability of astronomy researchers to pull together to explore worlds outside our own adds perspective to the things that appear to divide us here on our tiny world. •