Everyone wears underwear. Your grandma wears them, your dad wears them, your mailman wears them. Heck, even some dogs wear underwear. We are a society fixated on comfort, but also on functionality. Your personal trainer dons moisture-wicking underlayer, while your mom might be sporting spanx to hold in the result of years of childbearing.

Suited for Space. The Chemical Heritage Foundation, Philadelphia. Through November 14, 2014.

But astronauts tend to think of underwear on a different level. You might say their views on underwear are – dare I say – out of this world.

The Chemical Heritage Foundation in Philadelphia, Pennsylvania, is currently housing a series of high-resolution images and used space journey pieces in “Suited for Space.” It includes everything from gloves to moon boots to used urine containers, but it’s the space unmentionables that really stand out. When the first space suits were designed in the early 1960s, they looked more like re-imagined diving suits. With their bulbous helmets, strangely placed zippers, and often glossy finish, it seemed as if astronauts would emerge from the sea and ascend straight to the stars. The undergarments, however, are more akin to long johns than the skimpy lingerie you may be thinking of.

On display in the quirky exhibition are a few different models of spacesuit underwear, including a beige cotton one-piece with coil spacers affixed strategically to allow airflow. “Such underwear,” the suit’s caption reads, “was an absolute necessity; it kept an astronaut from overheating in a completely airtight spacesuit.” And an absolutely necessity it was. A sketch from 1965 shows the Gemini EV spacesuit with its many layers, the first of which labeled “underwear,” others including “comfort layer,” “pressure bladder,” and “restraint layer.” In the late 1960s, Atlas Underwear Corporations designed the Apollo 11 “biobelt,” a soft layer worn against astronaut’s skin designed to monitor things like blood pressure, but not necessarily designed with the wearer’s comfort in mind. Commander Chris Conrad of the Apollo 12 mission wasn’t a fan of the biobelt. He mused, “It looks like I’ve got poison ivy under these things.” 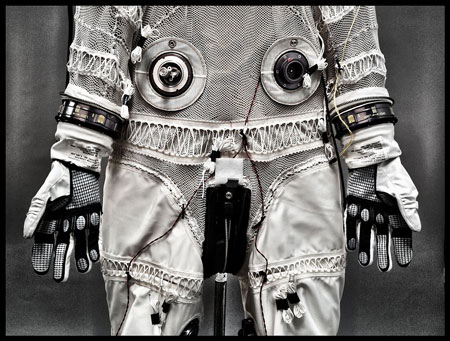 The under layer of the Stratos space suit used by Felix Baumgartner in 2012.

Space underwear have come a long way since their first use fifty years ago. They still resemble those one-piece men’s pajamas your great-grandfather probably wore, but today’s technology replaces elements like coil spacers. Some of the most recent underlayers are composed of stretchy material that provides the flexibility astronauts need when navigating and working in space. They are typically fitted with cooling tubes and sweat-wicking fabric to keep their body temperatures at a nice medium between the coldness of space and the heat pent up in their tight suits.

The innovations made on these space layers often catch the attention of clothing manufacturers, including Jockey International, who in recent years adopted a form of NASA’s cooling features for astronaut garments into their underwear and underlayers. Companies like Under Armour have been incorporating cooling and moisture-wicking materials into their designs for much longer, but there is certainly power in advertising NASA fabrics as morning jog wear. When visiting “Suited for Space,” it might be easy to overlook the images of underwear worn by NASA’s best, but the fabric on your fitted workout gear was most likely spawned from the same technology. 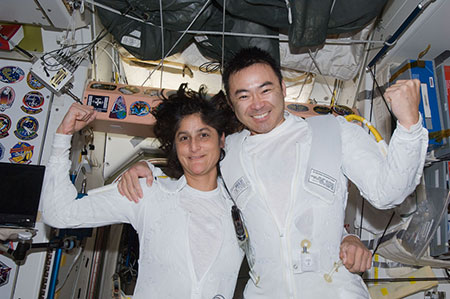 Two astronauts pose in their thermal underwear after a successful mission.

The heat and moisture absorbing qualities that keep space men and women comfortable as they look down at us from the stars are obviously desirable traits for Earth-wear as well (if only to make us feel like otherworldly space travelers), but it’s curious to consider the research and engineering that went into developing the fabrics. More recently, countries such as Japan are said to be designing under-underwear, looking more like boxer briefs. In 2009, Koichi Wakata wore the same pair of underwear for nearly a month while on the International Space Station. The material tested was alleged to be sweat-wicking, odor resistant, and insulating, qualities needed in closed quarters during those oh-so-cold space nights. Wakata later attested to their success, having had no complaints from his fellow astronaut travelers of odd smells coming from his trusty drawers.

The next time you slip on your Jockey boxers or moisture resistant workout gear, you’ll have NASA to thank for keeping you cool, dry, and smelling squeaky clean. Something as mundane and commonplace as underwear must undergo experiments and alterations to ensure their durability for space travel, as they can’t simply wear a standard four-pack of white briefs from your local Wal-mart, or even long johns worn by ice fisherman. Astronauts need the best for space exploration. You won’t catch NASA cutting corners, not even with their underwear. • 9 July 2014