I turned a corner, and there it was: The Arch. I gulped down my surprise and walked down the cobbled street, toward the strange yellow structure. Plump women in patterned huipiles perched on the sidewalk with baskets of fruit.

I smiled and declined. I must have looked dazed, because I couldn’t take my eyes off El Arco. The Santa Catalina arch hovers above the narrow street like a Romanesque bridge; the structure is punctuated in the middle by a small tower, which bears an elegant clock and tiny crucifix. Its shadow fell over me as I walked beneath the ribbed vaulting, and when I reached the other side, I turned around and saw the view that makes El Arco famous: Beyond the rooftops loomed Volcán de Agua, a colossal volcano tinted blue-green. On a clear day, the clouds that shroud its peak burn away, and the Arch and volcano perfectly complement each other.

As I stood in the street, snapping pictures of the Arch, a street vendor approached and offered multicolored wristbands. When I said, “Maybe later,” she asked my name, where I came from, and what I did for a living. Her persistence was endearing.

“My name is María,” she said, then shrugged. “There are a lot of Marías here. But you will remember me. I’m a different María. When you come back, maybe you will buy one of these.” She held the wristbands aloft and smiled that beaming Guatemalan smile.

This was Antigua, the long-ago capital of Guatemala and one of the most beautiful places I had ever visited. Nestled in a valley and surrounded by scenic mountains, the gridded streets had changed little in the previous three centuries. Squat row houses stood shoulder to shoulder, each painted in cheery pastels. Tuk-tuks buzzed slowly down the streets; dogs lazed on the sidewalks. On every corner, a tiny indigenous woman trundled past a series of antique wooden doors. Men stood in open entryways and waved as I passed by. Clouds rolled over the ridges in the late afternoon and turned a breathtaking pink. Every vantage point, every angle, every rooftop and window shutter begged to be photographed. The city is just that gorgeous.

Antigua is what I like to call a “museum city,” a historic town so well preserved that an entire country builds an identity on its fabled architecture. Ever since I moved to Central America a year ago, I have been enamored of these magical burgs. Like old European cities airlifted into the Latin world, such places defy modernization. While Guatemala City is filled with high rises and hotels, chain restaurants and multilane highways, Antigua leaves its earthquake-ruined churches untouched. No billboards blight the skyline. Horse-drawn carriages still circle Central Park, and tiny tiendas – hardware stores, tailors, barbershops – quietly carry out business in weathered stucco cottages.

Not only is the city endlessly picturesque, but its history also reads like folklore: Spanish conquerors established Antigua in 1543 as the capital of Guatemala, but only after a previous capital had failed. The city thrived for more than a century, until a 1717 earthquake leveled 3,000 buildings. When a similar series of earthquakes razed the city again in 1773, the municipality threw up its hands and moved the capital to sturdier ground. The Santa Catalina arch (or “El Arco,” as everyone knows it) once served as a bridge from convent to school, so that nuns could cross the street without interacting with secular people.

The magic of Antigua is overpowering — literally. Over and over, I met expats and heard the same story: “I was hitchhiking my way to South America, but then I came to Antigua. I thought I was only staying a few weeks. I figured maybe I’d take a Spanish class. Now I’ve been living here three years.” Or five years, or ten. When the city casts its spell, visitors struggle to break it.

Only about 35,000 people live in Antigua, and although the volcanic soil is hardy, the city itself relies almost entirely on tourism. This is the way of museum cities: Antigua is a functional community, with a regular post office and supermarket, but the economy only prospers because of tourists. Many of the fashionable bars and restaurants are owned by eccentric expats. Antigua’s many hostels cater to a steady influx of backpackers, as do the Spanish schools and alcoves full of souvenirs. Competition is stiff, especially during the low season, when cold evenings and heavy rains keep travelers at bay.

“Not a lot of Guatemalans live in Antigua,” said one expat, who moved to the city shortly after the civil war ended in 1996. “They all moved to other towns, where it’s a lot cheaper, and they rent out their homes to foreigners.” 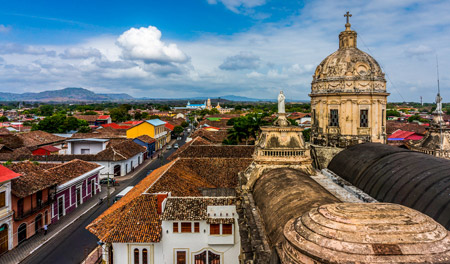 Shortly after I moved to Costa Rica, my friend Bill visited from Pittsburgh and we found ourselves on a bus to Nicaragua. We wanted to see Granada, a colonial town on the edge of Lake Nicaragua, theoretically the oldest inland city in the Americas.

Granada is a perfect city. The streets are narrow and crooked, opening into public plazas. Enormous wooden doors hang open, revealing leafy courtyards and abuelas in rocking chairs. Skinny teenagers pedal down the street on bicycles, their chains squealing, just as horses pull wagons in the opposite direction. The old city is only a few kilometers wide; Bill and I could walk from one end to the other in a half-hour. Visitors describe Granada as “colonial,” but the stone walkways and towering churches smack of fairytales — the Italy of Pinocchio, the Spain of Don Quixote. Such majesty should only exist in the woodcuts of romantic novels.

Even our hotel was perfect, with its wooded atria and tiny pool, the simple rooms and plaster walls crawling with geckos. On the avenues, the restaurants had perfect arrangements of tables, perfect platters of ropa vieja and fried plantains, perfect little napkins wrapped around Coca-Cola necks. When we ordered “un litro” of Toña beer, it tasted perfect on our lips, the lightest and airiest of cervezas.

It was here that I starting thinking about why people love museum cities — why, in fact, the yellow towers of Granada’s cathedral adorn half the postcards in Nicaragua. The architecture is handcrafted with a level of skill and patience that the Home Depot generation simply can’t imagine. We are drawn to the quaint incongruities, the low doorframes, the oddly shaped windows, the layers of brick, plaster, and paint that have gradually accumulated over a house’s original shell. We like to see long-irrelevant buildings, like customs houses, defensive walls, stables, and slave markets, partly because we enjoy seeing life as it was lived in the days of yore, and partly because we are smug about human progress.

The scenery is vital: Both Granada and Antigua stand in the shadow of imperious volcanoes, and Granada also boasts a long lakeshore and proximity to “Las Isletas,” a delta of islands created when Mombacho Volcano blew giant boulder into the air. Locals claim that there are 365 islets, one for each day of the year. As if that trivia weren’t charming enough, the lake is home to a unique species of freshwater sharks. The sharks, it turns out, arrived in the lake by leaping their way up the San Juan River, almost exactly like salmon. Granada emanates magical realism worthy of Gabriel García Márquez, and Nicaraguans love to cultivate it. 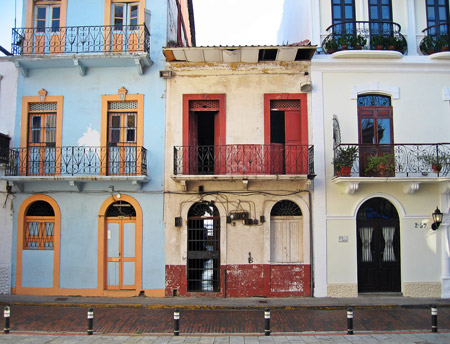 Most recently, I visited Panama City, the largest and most modern metropolis in the region.

“You have to go to Casco Viejo,” friends begged me. “You’ll love it there.”

Of all Central America’s museum cities, Casco Viejo is the slowest to recover from the past. In the wake of recurring pirate attacks, the Panamanian government decided to build its capital on a peninsula ringed with walls and cannon. Like the other museum cities, Casco Viejo boasts a network of narrow streets and stately old buildings. The Plaza de la Independencia is as elegant a square as you’ll find in Europe, and old churches still attract the faithful, despite the scaffolding and construction tarps.

Unlike its cousins, Casco Viejo was abandoned for years as a useless slum, and while entrepreneurs have renovated chunks of the neighborhood, whole blocks remain damaged and dangerous. People warned me not to venture beyond certain streets, because I was sure to tempt muggers. Some buildings are entirely gutted; mountains of rubble lie beyond the empty windows. One minute, you’ll be standing on the smooth brick street in front of Da Vinci Deli Pasta Gourmet; the next minute, you’ll be walking hurriedly down an alleyway, where old men in dirty T-shirts sit in rocking chairs and stop talking as you pass.

Because Casco Viejo is in flux, the streets are filled with police. Panama City already overflows with security, but these guys mean business: They wear berets and Kevlar vests, and they tote machine guns with casual ease. These paramilitary tourist police stand on nearly every corner; platoons of police wander around the plazas, conversing grimly in the shade. Their presence is welcome, because crime in Casco Viejo is a real threat, but the sheer number of officers is alarming.

This is the downside of museum cities: They are too old to leave alone. All three of these cities are World Heritage Sites, which means residents must treat them gingerly. Governments coddle these cities the same way nursing homes care for Alzheimer’s patients; everything is planned, nothing happens organically. Those splendid skylines are so fraught with symbolism and national pride that a misplaced roof tile could cause panic. The only future these cities will ever know is their own past.

As I packed my bags to leave Antigua, I felt the city tug at my heartstrings.

“Don’t leave,” coaxed my new friends, both expats and Guatemalans. “You just got here! Stay a few more days.”

I have built a life in Costa Rica, so the prospect of staying was absurd, but I could vividly imagine my life in Antigua. I could easily find an apartment. I could walk these antique streets every day. Food was cheap, as was the raucous nightlife. I could tutor ESL in my sleep. As evening fell over Antigua, and dark clouds swallowed Volcán de Agua, I watched the traffic fly past my hostel and considered my eventual return. I loved the brightly painted “chicken buses,” each encrusted in lights, like moving pinball machines. I wanted to hop in a tuk-tuk and ride around all night, the three-wheeled vehicle wobbling down one mysterious lane after another. I really could stay here indefinitely, maybe years.

In a world of swelling sprawl, people yearn for walkable historic towns. It is significant that Costa Rica has no museum cities; the most successful country in the region has seen such rapid development that remote fishing villages have transformed into hip surfing meccas in only a decade. Multi-story condominiums have erased entire towns. Costa Rica has no equivalent to Granada; even 200-year-old San José tore down old districts in favor of office towers, and many surviving buildings are so unkempt that they’re hard to recognize as historic.

Still, Costa Rica is home now, and I have accepted museum cities as destinations for escape, not places to live.

I zipped up my bag and headed out the hostel’s door, then hopped aboard a waiting shuttle. We drove through the dark streets until the last old house vanished into darkness. Antigua was gone. But that’s the thing about museum cities: They have survived everything, from earthquakes to genocidal wars. They’ll persevere as long as their nations continue to love them, and that devotion that will surely surpass my lifetime. No matter what happens, I can always come back to Antigua, and there it would be, unchanged. • 21 November 2014