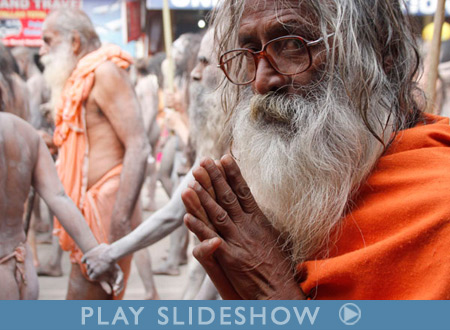 The Hindu calendar has 70 holidays, some lasting days or weeks. It is therefore almost impossible to visit India without having the opportunity to celebrate at least one of them.

I was especially lucky on my recent trip to experience the biggest and most sacred of them all — the Kumbh Mela, a three-month long festival that takes place every 12 years in the holy city of Haridwar.

From January 14 until April 28, millions of pilgrims from every caste gather at the Ganges River in hopes of washing away their sins. A dozen astrologically determined days are believed to be particularly auspicious; the Maha Shivratri is arguably the most significant. On this, “The Night of Shiva,” the Ganges is believed to offer endless blessings.

For most of the day, the Ganges is restricted for use by the sadhus — mystics, usually men, who give up all their possessions, leave their families, and dedicate themselves to growing closer to God. The sadhus are government-protected and highly respected; thousands of people camped out and waited in lines for hours before the sadhus arrived. By 8 a.m., the sadhus — naked and covered in ash — storm streets barricaded and policed for the men’s protection. They raced to the river to be the first to take a holy dip in the water.

In between the hoards of naked sadhus wildly running through the streets, colorful floats carried gurus who waved to the crowd as devotees fanned them. All around, vendors sold holy beads and containers to fill with holy water as souvenirs. Families laid out picnics next to small temples set up by the sadhus to give out blessings, while a loud speaker announced the next bathing session.

The day is a strange combination of ancient spiritual practices and a trip to the amusement park. At times the immense number of people intimidated. To make room for the sporadic movements of the sadhus, police occasionally pushed the packed crowd into narrow streets lined with food vendors’ vats of burning oil.

Yet even pushed shoulder-to-shoulder by policemen’s batons, the crowd remained in good spirits. Save for a few incidents with aggressive police officers, such a large mass of people was surprisingly non-violent. Ironically, it was the sadhus that assaulted each other in their frantic race to get to the river.

The day ended with the Ganga Aarti, a daily ritual that has been practiced on the riverbanks faithfully for thousands of years. The city lit up with colored lights and everyone packed up their holy water and headed home. • 3 May 2010