“A day of public thanksgiving and prayer to be observed by acknowledging with grateful hearts the many and signal favors of Almighty God.”
— George Washington, the first President of the United States, delivering the National Thanksgiving Proclamation, on October 3rd, 1789

For the last thirty years of his life — the first thirty years of 20th century America — the historical genre painter Jean Leon Gerome Ferris devoted himself to capturing the history of America in paint. He called the result of this enormous task — a series of 78 scenes from the landing of Columbus to the start of World War I — The Pageant of a Nation. No one had ever seen America like this: All her heroes, great and small, presented in one complete and satisfying narrative — the most extensive series of American historical paintings by an individual artist before or since.

The paintings, wrote the authors of History of the Portrait Collection, Independence National Historical Park, were “expertly executed reproductions of the past”; Ferris on par with the best historical genre painters of his time. They were meticulously researched and crafted. And yet, the authors wrote, Ferris’ paintings said more about the era in which they were created than the events they portray. The paintings “formed a bridge between fact and fiction over which the viewers…were willing travelers.” The Pageant of a Nation, wrote the authors, confused “verity with verisimilitude.”

In one of the most widely reproduced Ferris paintings, The First Thanksgiving, the characters are just as they exist in our Thanksgiving myth. The Pilgrims don the familiar tall hats and buckles. The Wampanoag wear feathered headdresses. The women smile. The Wampanoag are serious. The Pilgrims stand around a well-crafted outdoor table. The Wampanoag sit on the ground. In the foreground is a colonist in armor. One of the Wampanoag wears a Pilgrim’s hat with a feather stuck in the brim. There are cakes, and oysters, and porridge, and grace. There is a spirit of sharing and thanks. The weather seems to be holding. 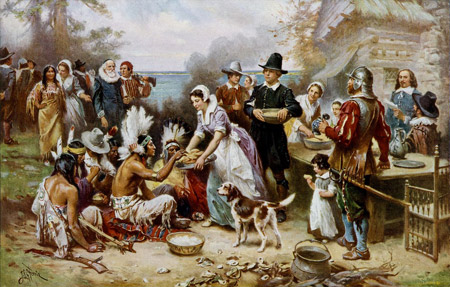 The closer we look at this painting, the more we see it as ridiculous. If paintings can be held responsible for distortions of history, this painting is practically criminal.

But there is another painting in The First Thanksgiving that has nothing to do with historical verity. It is the painting of verisimilitude, the painting of the truth as-if. It’s what the Romantic poet Coleridge called “poetic truth.” This is the truth beneath the surface of reality, the facts taken up by the imagination. In the imagination, verity is transformed by verisimilitude. Our imagination can extract “hidden ideas and meaning” from the information we cannot escape. Imagination “dissolves, diffuses, dissipates” the stuff of life, which is essentially fixed and dead, in order to recreate it. And when it is impossible to recreate, said Coleridge, still the imagination struggles to idealize the dead lifestuff, to exalt it, to form a bridge between the perfect image and reality.

In the Ferris painting of verisimilitude, America celebrates a feast day. Everyone is American, and all Americans are grateful. This painting has little to do with the history of the early settlers. It is an allegory of gratitude. This painting is not trying to fix the facts. It is trying to transcend them. It asks, as George Washington did in his Thanksgiving Proclamation so many years ago, what does it mean to have a national language of gratitude? The myth of the first Thanksgiving aside, it is a fair question. • 24 November 2014