The 1940s suburban Michigan of James van Sweden’s youth was a panorama of precise, tidy houses bordered by meticulous lawns. As a teenager, van Sweden (who died a few weeks ago) was responsible for maintaining his parents’ own prized yard. The chore grew into a lawn-mowing business, which didn’t last long. As van Sweden pushed his mower across his neighborhood, something else caught his attention. A few of his neighbors had allowed their yards to sprout free and the results were a revelation. Margaret Smith’s lawn was “postage-stamp size,” overtaken by larkspur and iris and globe thistle. Marybell Pratt and Margaret Holmes had almost no lawns at all. For James van Sweden, these neighbors had joined in a tiny revolution. They began to give plants to the young van Sweden, who proceeded to overhaul his own pristine backyard. Gone went the lawn and in its place waved tangles of wild phlox. Van Sweden began taking trips to the Michigan countryside, where he sketched country meadows and wildflowers, sand dunes and pines, re-imagining what a garden could be.

Like his Michigan neighbors, James van Sweden had a passion for grass. But van Sweden, and his partner Wolfgang Oehme, wanted their grass free-flowing and long, filled with birds and bees and butterflies. In Gardening With Nature, van Sweden included two paintings. One is A Neat Lawn by David Hockney. The centerpiece of A Neat Lawn is a house that is essentially a beige rectangle with an address on it. The house is flanked by static shrubs. The bottom half of the painting is another rectangle, a large green swathe of lawn. The grass is also static and strangely barren. There are no people in A Neat Lawn, no movement at all, save a sprinkler lightly sprinkling. 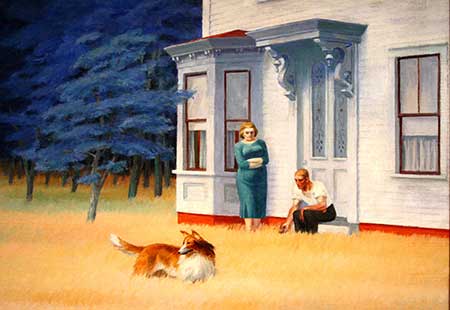 The other painting, by Edward Hopper, is titled Cape Cod Evening. It is also a painting with a house, but only the side of the house is seen. A man and a woman are relaxing in the evening light — the woman leans against the house with crossed arms; the man sits slouched on a step. A soft, overgrown grass that is yellowing with autumn hides their feet. They have obviously stopped mowing their lawn. There is a dog in the painting too, standing half-swallowed in the meadow of grass that reaches back into a copse of woods behind the house. 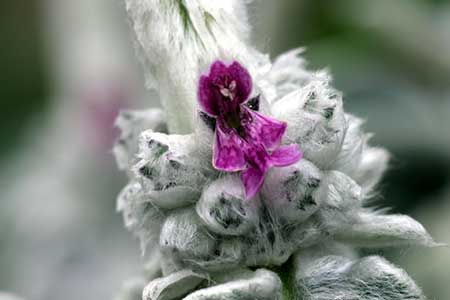 James van Sweden wanted his gardens to be a holistic experience, something to stand in the middle of, be enveloped by, residing somewhere between art and wilderness. Van Sweden wanted to design gardens that had the boldness of a wild landscape, lush and full and free, gardens that moved even when the wind wasn’t blowing, with dramatic contrasts of texture and height and color. Van Sweden thought a garden ought to have a powerful smell and include plants that you could stroke, like the velvety Stachys byzantine, which feels like the ears of a lamb. Touch was even more important to van Sweden than color, for human beings are tactile creatures. Time’s effect on the garden was paramount and each plant was carefully chosen in its relationship to the seasons. Some people thought Oehme and van Sweden’s gardens most beautiful in the winter. “Time is the gardener’s friend and foe,” wrote van Sweden, “always working its relentless changes. Gardening teaches us patience… But gardens can also teach us to live more in the moment — to listen, to watch, to touch, and to dream as the garden works its peaceful magic.” Van Sweden thought a garden could be experienced like a poem or a story. There was meaning in every lichen-covered stone, every changing leaf, and that meaning could emerge from the same mystery contained in wild nature. “Out of vast, unknowable nature comes the freedom to form new thoughts, or to notice some tiny wonder for the first time… It is not necessary that meaning be written in the garden, only that you discover personal meaning and be transformed.” Even a tiny garden plot on a tenement balcony could achieve the romance of a meadow, if given the right attention. Sometimes Oehme and van Sweden’s New American Garden style was also called New Romantic.

For van Sweden, the words “American” and Romantic” were perfectly interchangeable. “Americans crave frontiers,” he wrote in Gardening With Nature.

We like wide-open spaces, broad horizons, and new challenges. As a nation, we are restless wanderers, always searching for what’s over the next rise. We put down roots only to pull them up again when the spirit moves us.

Given our love of change, it’s surprising that the American garden scene consists mostly of suburban yards marching across the countryside in uniform ranks: hedges pruned carefully into unnatural boxes and balls; “foundation” shrubs piled high against houses like green concrete; broad, empty lawns awaiting weekly crew cuts and frequent doses of weed killer and water; and prissy flower beds jammed to their borders with garish and predictable annuals. Do gardens have to be so tame, so harnessed, so uptight?

For many Americans, these were fighting words. The American lawn is not merely a domestic pleasure — it is the emblem of the civilized American. The American lawn is an ordering of savage nature, it is a triumph over the forces of chaos. Americans may once have craved frontiers, but the terror that wolves and mosquitoes wreaked upon early colonizers ultimately changed their intrepid self-conception. Prairies turned to city blocks, cowboys became urban planners, and geometry overcame anarchy. We paved over the chaos, drove out the insects, and shined fluorescent lights over the darkness. We are not to be entirely blamed for doing this. It is difficult to sit comfortably in a tangled meadow. We have no fur to speak of, no scales or feathers. Our foot soles are soft, our nails are short, the meadow air makes us sneeze. Few things can soothe our tender hides and tender souls more effectively than the wide-open, broad horizon of a freshly mowed lawn. 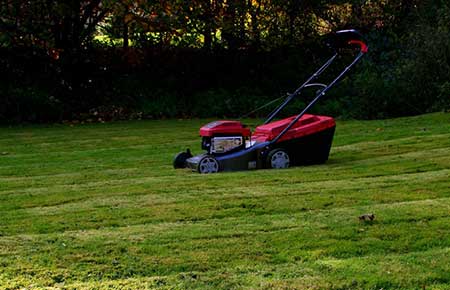 Oehme and van Sweden understood that our gardens ought to be a balance between green concrete and totally wild nature. They would often allow garden paths to crop up organically, for instance, letting people wander as they liked and setting them later. Oehme and van Sweden were also not very strict about “natives.” They liked North American plants but they liked exotics too. Both gardeners felt the Japanese, for instance, had a particular sensitivity to grass and were quite influenced by their uses of it. Oehme and van Sweden were broad-minded when it came to grass — they loved Himalayan purple silver grass and European autumn moor grass as much as (or even more than) American grass. 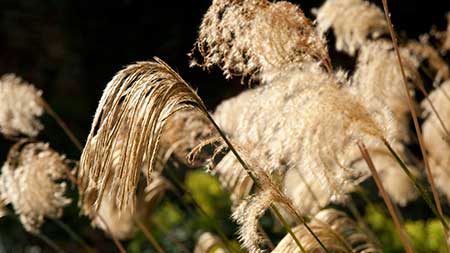 Yet James van Sweden was ever guided by the spirit of “American grass.” American grass is the days of Thoreau and Whitman and wild Prairie shag. It is amber waves hiding the burial mounds of the Sioux and Grizzly bears and jackrabbits. This kind of grass was destroyed with the birth of the standard American lawn. Lawns took on the burdens and comforts of all things domestic. The wildness of grass went away. And with it went that fabled wildness once said to reside in every American: The belief that one could, at any moment, go from settled to savage, that one could, at any moment, just go.

Wild grass was already on the way out in Thoreau’s time. One of his most famous essays, “Walking,” is largely a complaint about his neighbors’ yards.

Hope and the future for me are not in lawns and cultivated fields, in towns and cities, but in the impervious and quaking swamps… The most tasteful front-yard fence was never an agreeable object of study to me; the most elaborate ornaments, acorn tops, or what not, soon wearied and disgusted me. Bring your sills up to the very edge of the swamp, then (though it may not be the best place for a dry cellar), so that there be no access on that side to citizens. Front yards are not made to walk in, but, at most, through, and you could go in the back way.

James van Sweden would have agreed. Where van Sweden disagreed with Thoreau was the solution. For Thoreau, the only cure for our sterile civilization was in the pristine, unspoiled wilderness. “In Wildness is the preservation of the World,” he famously wrote. James van Sweden was able to find wildness in an unmowed field. Americans, he knew, can never be truly wild. But they can be inspired by nature even in a yard and feel a longing for wildness in their souls.

This is what James van Sweden meant when he wrote, “It is not necessary that meaning be written in the garden, only that you discover personal meaning and be transformed.” Van Sweden was not merely dabbling in superficial aesthetics. The New American Garden was an exhortation to resurrect the shattered American spirit. It was the barbaric yawp of Whitman and every American Romantic who calls out to the wild. Maybe it is ridiculous to put so much importance in a garden. A gardener cannot return us to Eden any more than a preacher can. But there are messages written in a garden whether we place them there or not. And what better way to consider America than in the consideration of her grass?

“A child said, What is the grass?” wrote Walt Whitman, “fetching it to me with full hands;”

How could I answer the child?. . . .I do not know what it
is any more than he.
I guess it must be the flag of my disposition, out of hopeful
green stuff woven.
Or I guess it is the handkerchief of the Lord,
A scented gift and remembrancer designedly dropped,
Bearing the owner’s name someway in the corners, that we
may see and remark, and say Whose?
Or I guess the grass is itself a child. . . .the produced babe
of the vegetation.
Or I guess it is a uniform hieroglyphic,
And it means, Sprouting alike in broad zones and narrow
zones,
Growing among black folks as among white,
Kanuck, Tuckahoe, Congressman, Cuff, I give them the
same, I receive them the same.
And now it seems to me the beautiful uncut hair of graves.