Invite your most aloof and sophisticated friends to the New York Public Library exhibit, The ABC of It: Why Children’s Books Matter, on display through March 23, then watch them melt. You’d have to have a heart of stone not to be charmed by the books, illustrations, manuscripts, and sundry artifacts in this exhibit — and you’d have to have been born a grown-up not to regress a little.

“There’s the Pokey Little Puppy!” I heard a woman in tweeds squeal, pointing to that book, with its familiar cover, displayed in the manner of Renaissance painting in a vertical glass case in the middle of one of the rooms. “C’est George!” exclaimed an impeccable Frenchman to his impeccable wife as they leaned over the display explaining the saga behind Curious George: Its authors H.A. and Margret Rey escaped Nazi-occupied France with the manuscript of the book strapped to their bicycles. 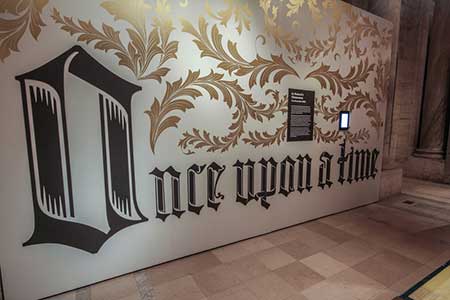 The exhibit has a definite flavor of whimsy and serendipity in its maze-like lay-out, its colorful presentation of objects in demarcated spaces, and its wide-ranging choice of volumes, culled from the Library’s vast children’s book collection. There is a great deal of mixed media without the esthetic cheapening that comes with too many computer screens. The effect is like walking though a children’s book.

It is one of the strengths of the exhibit that you can’t summarize what it’s about. The subtitle, Why Children’s Books Matter, isn’t actually addressed — thank God: Who wants to have our favorite books, loved because they escape the adult world, co-opted to a utilitarian end? And the introductory panel that quotes W. H, Auden — “there are no good books that are only for children” — seems inconsistent with the way books are represented here in higgledy-piggledy fashion, good and not so good thrown together. We value children’s books not because of their literary merit or pedagogical value but because they charmed us once, and exist in our memory and imagination within the lost sphere of childhood.

Indeed, what makes the exhibit so pleasant is that it doesn’t seem too concerned about making points. There are ideas but not too many and they are not pushed too hard. Instead, we have a cornucopia in which adults are bound to find something that evokes the past, and children (since the exhibit is welcoming to them, too), something to engross or distract while their parents indulge in nostalgia. 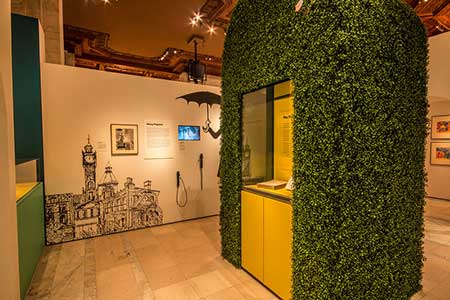 There is an arbor where you can sit as if inside a make-shift secret garden, a clip of Julie Andrews singing “A Spoon Full of Sugar” next to a first edition of Mary Poppins, a Mary Poppins doll, and an umbrella owned by Mary Poppins’ author P.L. Travers; a collection of Christopher Robin’s stuffed animals, the originals behind the illustrations in A.A. Milne’s Winnie the Pooh; and a megaphone blaring the limericks of Edward Lear, recited by properly emphatic British voices. There is an area with a small bookcase where children (and adults) can sit quietly and peruse a selection of favorites. I found a tattered copy of a James Marshall’s Miss Nelson book, whose title character’s repulsive alter-ego, Viola Swamp, greatly entertained my children when they were young.

There are exhibits devoted to William Blake’s profound Songs of Innocence and Experience, Lewis Carroll’s classic Alice’s Adventures in Wonderland, and Margaret Wise Brown’s ever-enduring Goodnight Moon. The inimitable Maurice Sendak and his “Wild Things” are also given ample display. 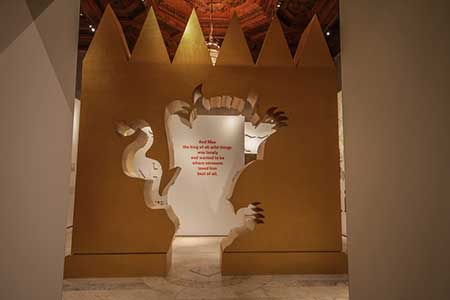 I lingered in the area devoted to the Edward Stratemeyer “syndicate” responsible for The Hardy Boys, Rover Boys, Nancy Drew, and Bobbsey Twin books. These last, churned out like the rest in assembly line fashion, were sources of delight to me growing up — I still can summon to mind an illustration of the twins in a field of tulips that used to enchant me as a child. The Hardy Boys had a similar hold on my husband during his early years. The brothers in that series had a motorboat and a motorcycle, a clubhouse, girlfriends, a cool dad, and a moderately diverse group of pals. The first versions of these books sketched a boyhood idyll of a particular early-20th-century, pre-Cold War kind. (The books were revised in the late 1950s and 1960s to make them more up-to-date—which is to say, to eliminate some of the egregious racial stereotypes).

A vague effort is made in the exhibit to produce a chronology, though it is not strictly held to and its categories are slippery. There is a section devoted to “The Romantic Child” and “The Progressive Child” — with texts and explanations of different views of childhood that match with the kinds of books popular in given periods. But it all seems a bit arbitrary and half-hearted. We read children’s books outside of a linear time frame—the older ones mixed in with the new. I read The Secret Garden and Nancy Drew; my daughter read Nancy Drew and Harry Potter. A children’s book that both my daughter and I loved, The Trouble with Jenny’s Ear by Oliver Butterworth, seemed not to be in the exhibit (though perhaps I missed it). That book still resides in my imagination as the perfect wish-fulfillment for an over-achieving child: a young girl who wins quiz shows because she can hear people’s thoughts.

What one notes in moving through the exhibit is the way that these books struggle with that platitude, attributed to Horace but reaching back to Aristotle, that literature should delight and instruct. When it comes to children’s books, the two are often in an uneasy alliance or even at odds.

Thus, we see primers developed according to the pious principles of the great Puritan minister, Cotton Mather; another, influenced by the Enlightenment philosopher John Locke. None of these, unfortunately, seem much fun. There are samples of McGuffey Readers from my parents’ generation, and of Fun with Dick and Jane from my own. The novelist John Hersey is quoted as criticizing the latter for their “abnormally courteous, unnaturally clean boys and girls.” I remember vaguely noting the homogeneity of the characters and their airbrushed suburban lives when reading them as a child, but having no words to express what I felt.

There are also examples of pedagogy in support of civic causes — children’s books from the Russian Revolution and the Chinese Cultural Revolution, books associated with Irish Independence that makes use of fairy tales, a beautifully illustrated Hebrew alphabet book to teach children the language of a not-yet-created Jewish state. There are samples from W.E.B. Dubois’s monthly magazine for African-American children, The Brownies’ Book, published from 1920 to 1921, to teach black children pride in their identity. 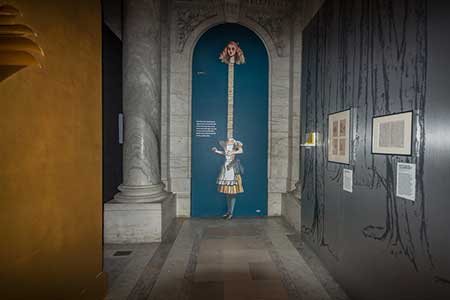 Yet it is noteworthy that some of our most beloved children’s books don’t teach anything and can’t be linked to an agenda of any kind. It is also interesting to see those that caused a stir in their day for failing to toe a line of one sort or another. A recessed space contains books that have been controversial or censored: Pippi Longstocking, for its character’s rebelliousness, The Diary of Anne Frank for its narrator’s sexual explicitness, A Wrinkle in Time for overstepping the bounds of secularism when first published and for being unconventionally spiritual more recently. There is a copy of Garth Williams’ 1948 A Rabbits’ Wedding, castigated in its time for representing the marriage of a white rabbit and a black one. What looks like iconoclasm or perversity in one era can become unobjectionable and even desirable to teach in another — and vice versa. My reflex is to think that children are the best arbiters, being naturally drawn to what is good and true, but I may be indulging in a Rousseau-ist idealism here. After all, children are also fascinated by the sadistic and the gross — all those disturbing Grimm’s fairy tales, not to mention Jon Scieszka’s Stinky Cheese Man.

Near the end is a display of Edward Muybridge’s early stop-motion photography, a precursor to early film, making the connection between these photos and children’s book illustrations that relay movement through a few pen strokes. It is an interesting analogy on a number of levels. Children’s books are like movies insofar as they rely so heavily on the visual, their illustrations moving us through time and affecting us more emotionally than intellectually. And if movies transport us to another place connected to memory and imagination, these books do that, too. They transported us as children, when we were more easily dazzled and capable of suspending our disbelief, and they transport us now by taking us back to the space of childhood when our sense of wonder was fresh and unmediated.

The exhibit ends with a quiz projected on an overhead monitor. Here are three of the questions that you should be able to answer:

1)What is the Caldecott Award given for?
2)What technique did Eric Carle use for his illustrations?
3)How many Bobbsey Twins were there?