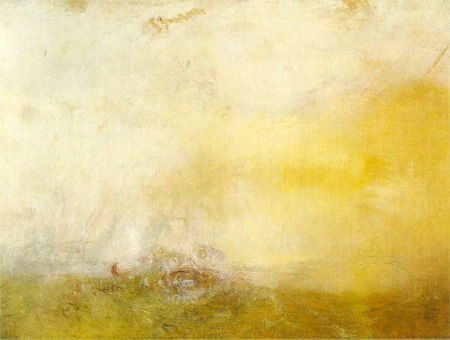 An army of dark clouds slid over Brooklyn today. They came from the north, whence come the wicked. We don’t know who sent them, but we don’t have to. Dark forces are dark forces. It was a Romantic painting in Kings County, New York, something, maybe, by J.M.W. Turner.

Charles Baudelaire once said, “Romanticism is precisely situated neither in choice of subject nor exact truth, but in the way of feeling.” That’s a vague definition perfectly fitting to a vague subject matter. For all the use of words like “precisely” and “exact” it is neither. Romanticism, in short, barely exists. It is more of a mood than a movement. But what is a mood? It’s not a mental state exactly. Mood is more like the color of consciousness. But that merely adds vagary to vagary. Fact is, we’re still not sure what consciousness is, let alone mood.

On the other hand, life is lived under the umbrella of moods and feelings. The low clouds bring with them low feelings. Space contracts. The kid in the doorway on Atlantic Avenue has his collar pulled up and he’s trying to light a cigarette against the wind. The sidewalk is empty but for a ragged cat going nowhere. The clouds keep coming in rows and layers. Armies of darkness.

I am talking, here, about the weather. That most banal of conversation topics. The weather is superficiality at its essence. Except that the weather matters. It is the fundamental tool by which nature adds flavor, color, mood to the variety of our daily experience. Nature is mechanistic in its functioning, tied to the laws of physics that give it rules. But it speaks to us in feelings. The light of a day is “like this.” The shadows of winter make the world one way: brittle maybe, precise. The angle of the sun makes the world of summer another way entirely: smeared across the afternoon, vibrating.

Take “Sunrise with Sea Monsters” by J.M.W. Turner. Painted in 1845, it looks like it could be a work of 20th-century Expressionism. The main difference being that Expressionists aimed to express something inner, something subjective. Romantics like Turner look at things the other way round. They show us nature as a force that determines feelings in us. They show us nature as a communicative beast, framing our experience at every moment. The weather makes us, we do not make the weather.

What of the sea monsters, then? Well, for the Romantics, the voice of nature is neither gentle nor benign. It isn’t specifically malevolent either. The story is bigger, even more overwhelming in its implications. The weather that nature sends us frames our experience, gives us a set of feelings in which to live. But that frame is sent to us from beyond the limits of experience. It is sent to us from the unknown.

Sunrise in particular is a time of revelation. The world opens up. It is the most fundamental of thresholds, the threshold between night and day, dark and light. And that is a perfect place for monsters to go a lurking. Monsters are a half step between form and formlessness. Their monstrousness comes from their violation of the normal rules of shape and form and function. Monsters are a peek into the beyond, a glimpse behind the veil. And there they are in Turner’s painting. The monsters at the edge of day. Are they even there at all? In a moment more they won’t be.

I glimpsed them in the clouds today above Brooklyn. Sea monsters in the cracks of light between the long rows of marching clouds. The monsters were murmuring something about the fearsome incomprehensible largeness of the world. They were telling old stories to the Romantics on the Brooklyn streets below. • 22 October 2009