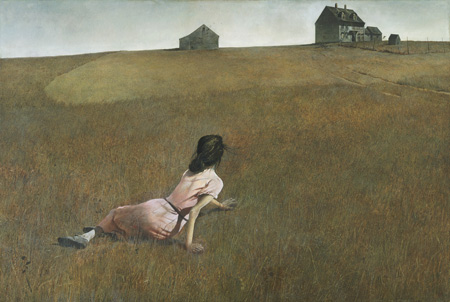 I remember seeing a reproduction of Andrew Wyeth’s “Christina’s World” when I was a child. It disturbed me. I felt that something horrible had happened to Christina and that she was left out there in the field, maybe to die. And what was happening in that lonely house up at the top of the hill?

There is, perhaps, no other American painting as recognizable and as loved as “Christina’s World.” The only other painting that comes to mind is “American Gothic” by Grant Wood. But for all his popularity (or because of it), Wyeth has generally been scorned by the critics. He has been called a cheap sentimentalist applying painterly tricks in the service of an empty nostalgia. New Criterion founder Hilton Kramer said simply, “he can’t paint.” Dave Hickey said Wyeth’s palette was “mud and baby poop.”

I keep coming back to the strangeness, the sense of unease that always bubbles up whenever I look at “Christina’s World.” Look at her hands and arms, spindly and wraith-like. Look, in particular, at the strange contortion in her right arm as she holds herself up. Something is wrong. Wyeth himself saw in Christina a kind of heroism. She was a real person living near his vacation home in Maine. She had been crippled by polio as a child but refused to use a wheelchair or to have much help at all. Wyeth admired her.

Still, I don’t see much heroism in the painting. If this is nostalgia, it is not the nostalgia of wistful and pleasant longing. It’s a nostalgia closer to its Greek roots. The “algia” part of nostalgia comes from the Greek word “algos,” meaning pain and grief. The pain and grief, the longing for a home, is not necessarily a curable condition. Wyeth has often been criticized for his nostalgia for a pre-modern, rural America shot through with Puritanism and a fundamental simplicity. I think the case is slightly different. Wyeth was fascinated with those kinds of solitary American scenes because they evoked for him a feeling, a not-quite-tangible sense of painful longing that is always gnawing at the corners of our experience.

I wager it is the same kind of feeling that often came to Wyeth in the act of painting. It has always been a strange and futile exercise, painting. It is the attempt to translate sensual perception, or experience, or thoughts, or ideas or just plain formal relationships onto a rectangular surface by means of pigment. The attention to detail notable in Wyeth’s paintings (look at the blades of grass in “Christina’s World”, the immense technical skill exerted to create the shadow of her right arm across her dress) is itself a longing, a desire to point at the realness of the real world.

A painting is always just a painting. A painting says, “I am not this thing, this experience, but merely a representation of it, a reference to it.” So painting is itself a kind of nostalgia, right there at the heart of it. We deal with a version of that same nostalgia in the rest of our lives too. When does anyone ever have a pure experience of reality? How do you capture an instance of pure “thereness” without it already having slipped into memory or without it already colored by a sense of anticipation about what is coming next? We are never exactly just “here” because we are always just past that and always just about to be in another “here.” Sub-atomically speaking, we are a wreck of divergent and unstable core stuff. And yet, we feel that we are real, that we are stable somethings existing in a genuine world. “Christina’s World” is not a nostalgic painting because it tells a simple story about a better world, but because it expresses the grief lurking at the center of all experience. It is popular because it has truth in it, and even Americans can appreciate that. • 21 January 2009