Like many of the pieces I write for Foodstuffs, this is a combined story of love and revulsion.* But unlike those pieces, this doesn’t reach back into history to pluck out Victorian funeral cookies or pre-microwave bachelor foods. No, this month I’m writing about recipes that are much more recent, but still forgotten — the recipes that fill locally produced cookbooks of the 70s and 80s.

I own a small collection of these cookbooks; I purposefully keep it small, because for every good recipe I find in them, there are usually three more that simply amount to mixing a canned soup with something else from a can and putting cheese on top. You’ve probably seen the cookbooks I’m talking about — you might even own one. Produced as fundraising projects or to celebrate a particular town’s “cuisine,” these typewritten or dot-matrix printed, spiral-bound collections have traditionally served as a great way to discover that your neighbors have terrible taste in food.

Or, at least, many of mine did. Two of the cookbooks in my collection are specific to Northern New Hampshire — the Shelburne Sampler II and Our Favorite Recipes: North Country Senior Meals. Well, the infractions in the Shelburne Sampler are relatively benign (except for the off-color drawing associated with the “Ethnic” recipe section), but the fine folks who submitted recipes to North Country Senior Meals provided some absolutely baffling entries.

How baffling? Well, nobody above the age of six has ever said, “I wish somebody would put chewy candy inside of bread,” but yet we have a recipe for Gumdrop Bread, a mouth-confusing combination of gumdrops and dry, sweetish-bread. I made this, and my first bite made me send a silent spiritual apology to all of the plants and animals used to create the monstrosity. And that’s not the only misstep in this collection – oh, no. “Special Beef” is special because it also includes a can of pork and beans. “Nibblers” are salt-topped canned mushrooms that you heat in the oven. The “low calorie dishes” section has exactly seven recipes, one of which is a soup that simply includes cabbage, celery, tomatoes, and a shit-ton of bullion. The canker-sore field day known as Santa Claus Punch combines hot pineapple juice with red hot candies. Really, I should’ve known what I was getting into when the Soups, Salads & Sauces section began with two chocolate sauce recipes, went to cole slaw, and then jumped to cheese fondue.

I swear I’m not just trying to fill the internet with more snark, here — there’s a lot that I love about these cookbooks too. Despite the Gumdrop Bread incident, these grandmother-fueled locally produced cookbooks are some of the best places to find recipes for delicious baked goods and other comfort foods – and not just the buttery-rich ones you’d automatically think of. In fact, my favorite go-to vegan cake came from the Shelburne Sampler II, in the form of Eggless Applesauce Squares. The Reader’s Guide to Good Eating from the staff at Arlington County, Virginia’s library system includes all sorts of amazing, comforting treats too, like peanut cookies that use real peanuts, not peanut butter, and a dish simply known as “The Ribsticker,” which my boyfriend and I have been eating huge bowlfuls of since I made it earlier this week.

These cookbooks include all sorts of fun, weird commentary and information too. The Reader’s Guide to Good Eating has information on how to turn flowerpots into DIY hibachis. Ben Werner’s charming introduction in the Shelburne Sampler II makes sure to note that the recipes are easy, and that “There are no instructions for cooking giraffe” in the ensuing book. The North Country Senior Meals book does claim in its introduction that all of their recipes “reflect the love of good cooking,” though, which I might have to argue with.

But perhaps what I love most about these cookbooks is that they’re a window into what communities actually eat — not the idealized version of the area’s cuisine you see in a “real” regional cookbook. Because our sense of where we’re from is closely tied to what we ate there – gumdrop bread and all. • 1 August 2014 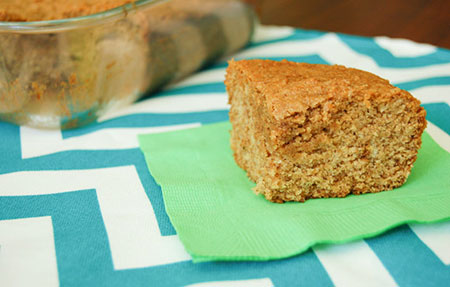 Lala Dinsmore was a newspaper reporter who lived down the road from me when I was growing up, and I thought she was the coolest. This recipe is my go-to vegan dessert. I’ll often cook it in a 9”x9” pan instead of the 13”x9” listed in the recipe to get taller squares, and I usually leave the glaze off.

Shelburne school children’s favorite. Made in the school lunch room kitchen in Gorham by Marjorie Ellis.

Mix in order given. Add the following dry ingredients:

Bake in a 13″ x 9″ greased brownie pan at 350 degrees for about 30 mins or until top springs back when touched lightly. Cover hot cake left in pan with following glaze: ½ cup confectioners’ sugar mixed with 1 tablespoon hot water. 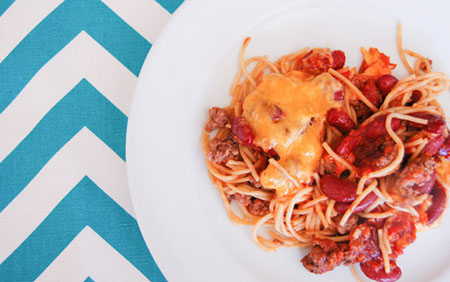 My one big trade here was that I used homemade ketchup to add a little bit more zing.

The following recipe (original) kept 6 men happy once a week for four years:

Spread ketchup between the layers. (This is best done at the time.) Cook until the aroma makes it impossible to resist. 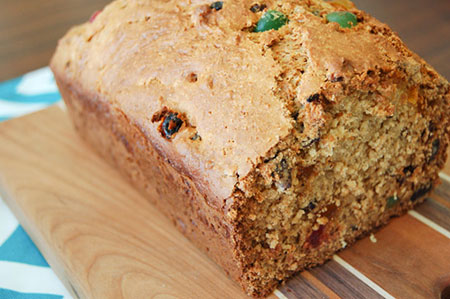 From Our Favorite Recipes

Instructions
Sift together flour, sugar, baking powder and salt. Stir in nuts, raisins and gumdrops. Blend together egg, shortening, milk and vanilla. Add to dry ingredients and stir until dry ingredients are just moistened. Pour into a loaf pan, rubbed with shortening and floured lightly. Bake in a 350 degree oven about 1 hour. Cool before slicing.