In the town of Crema, less than an hour east of Milan, they make a stuffed pasta that goes by the straightforward name of tortelli cremaschi. The name, however, is about the only straightforward aspect of this local speciality. Federico Fellini may have famously said, “life is a combination of magic and pasta.” But even the great filmmaker himself could not have dreamed up tortelli cremaschi, which must be the most Felliniesque pasta in Italy.

While the pasta itself follows a basic egg-and-flour recipe, the ingredient list for the ripieno (or filling) reads as follows: amaretto cookies (nearly a pound); candied citrus; raisins; mint candies; grated lemon zest; grated Grana Padano cheese; nutmeg; Marsala wine; mostaccino, a local cookie that is sort of like a ginger snap.

Allow me to address a few of your questions: No, I am not making this recipe up. No, this is not a child’s fantasy creation. Yes, this being Italy, there is an Accademia del Tortello Cremasco, a self-appointed organization, with officers, that governs the recipe’s correct preparation. Yes, tortelli cremaschi tastes as bizarre as you’d imagine.

How do I know all this? Because once, about a decade ago, I made the mistake of preparing tortelli cremaschi for people who were not citizens of Crema.

At the time, my old friend Daniella Bernabe worked as a schoolteacher in Crema, and she told me a story about a very odd sweet pasta that her colleagues had once served her. Even though Daniella lives less than an hour away from Crema, in the village of Pieve San Giacomo, she’d never before tasted this strange and foreign tortelli cremaschi. Now, by way of a quick geographic footnote, I should say that both Crema and Pieve San Giacomo are in Lombardy, and both are part of the same, relatively small province, Cremona. Yet when it comes to Italian pasta, these two towns may as well exist on different planets.

At the Bernabe home, the wonderful stuffed pastas made by Daniella’s mother, Anna, can only be one of the following: marubini (the specialty of Cremona) or tortelli di zucca (the specialty of Mantova). That’s it. Normally, even making two different towns’ special pastas in one provincial household might border on heresy. But Anna reasons that Pieve San Giacomo is halfway between Cremona and Mantova, so both marubini and tortelli di zucca are fair game.

But tortelli cremaschi? Well, only an American like me could introduce this sort of treason into their home. Which is why, even though she was curious, Daniella suggested I make the dish. I should have realized I was being set up: Even though I’d lived with the Bernabes during my college study abroad, and visited often enough to have a room in their home, up until this point, I had rarely been allowed in Anna’s kitchen. 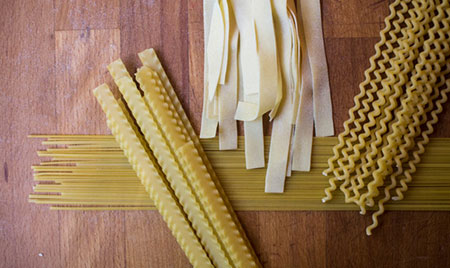 I was told that the only place I could buy all of the random ingredients for tortelli cremaschi was at an old-fashioned drogheria called Camelia in Crema’s town center. An older man silently measured them out precisely to the recipe. It can’t be all that strange, I thought. After all, the first pastas, dating from the 14th century Venetian republic, were historically sweet. Crema had been ruled by Venice, and so tortelli cremaschi fit with the types of “exotic” spices and raisins and candied fruit that Venice’s traders imported from the East. Savory pastas didn’t begin to exist in Italy until at least the late 18th century. According to the authoritative Italian cookbook, The Silver Spoon: Pasta, tomatoes don’t appear in pasta recipes until 1839.

This thinking, of course, was just my way of rationalizing what I knew Anna’s reaction would be. When I returned home to Anna’s kitchen and started taking the ingredients out of the bag, she shook her head. “Matto,” she said, as she tossed me an apron and handed me her mezzaluna knife.

As I chopped the cookies, and the candied fruit, and the mint, and everything else — all while Anna watched, bemused — I grew nervous. As I added the chopped mint candies to my ripieno, and then the egg yolk, it dawned on me that I would likely not be invited into the kitchen again.

Anna helped me shape them into proper tortelli. “What do we serve with these?” she asked. “Broth? Butter? Sage?” The man at the drogheria had not specified in his recipe. We decided on butter.

To make matters more stressful, Daniella had invited a couple of sophisticated friends from Milan to join us for dinner. The husband, who worked in finance and had just come from the golf course. Daniella had told him I had just taken a job as a restaurant critic back home in Philadelphia, and he seemed extremely skeptical of this American food writer. I attempted to pour him some of the fizzy fruity Gutturnio wine from nearby Piacentini, and he waved me away, saying he didn’t drink. He opened a bottle of chinotto, the brown bittersweet soda instead.

Anna and I served the tortelli cremaschi, in butter, as a first course. Everyone sat and took a bite. Silence. The husband took a sip of his chinotto and winced a little — I can only imagine the flavor pairing of the sweet pasta and the bitter soda. Everyone gingerly took another bite. Ok, yes, I was thinking, this is a little sweet. Very sweet. Gooey. Odd texture. Maybe it’s just a matter of acquiring a historic taste, I thought. Anna and Daniella began speaking quietly in dialect, which I couldn’t totally understand. Eyes around the table darted at me. Anna looked at me and said, “Troppo dolce.” Everyone chuckled at the quirky American who wanted to eat such a dish.

Wait a minute, I said! I didn’t invent this dish! You can’t blame me for this recipe! Blame the Venetians who ruled Crema!

Everyone nodded. It was agreed that the people of Crema must be completely crazy.

“However,” said the guy from Milan, in English. “Your new nickname will be Tortello Cremasco from now on. You should use that as your alias when you review restaurants. Or when you appear in pornographic movies.” 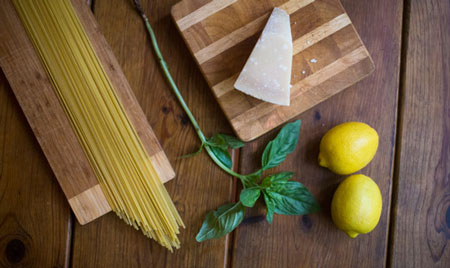 While my Tortello Cremasco Incident will certainly live in infamy, I have to state clearly here that the dish was interesting and worth trying. In fact, I wholeheartedly credit the tortelli cremaschi with igniting an interest in seeking out off-the-beaten-path or out-of-the-ordinary — but still traditional — pastas and risottos. And many of these I have since made successfully, though never ever for my Italian family in Pieve San Giacomo.

The three recipes included here fit the bill of off-the-beaten path, but traditional. No, none of them are as crazy as tortelli cremaschi. But you rarely, for instance, see classic lemon pasta served in the U.S., though along the Amalfi Coast — home of Sorrento lemons and limoncello — spaghetti al limone is very popular.

Likewise, while you may see walnuts tossed into certain dishes, it’s still pretty rare to see a pasta sauce like salsa di noci, which calls for walnuts as the prime ingredient. Yet in Liguria, along the coast of northwest Italy, salsa di noci is common — though it’s of course overshadowed by a more popular Ligurian sauce, pesto. According to The Silver Spoon: Pasta, Liguria’s use of walnuts (and pine nuts in pesto) is due to the “limited amount of fresh produce grows in the wild. As a result, Ligurians must make the most of the crops that thrive.” To me, salsa di noci feels like the kind of rustic sauce one makes when meat is also scarce.

I was inspired to experiment with lemons and walnuts. But in my next column, we’ll go a little more off the map, and look at what berries and melons can add to traditional Italian dishes. • 8 August 2014 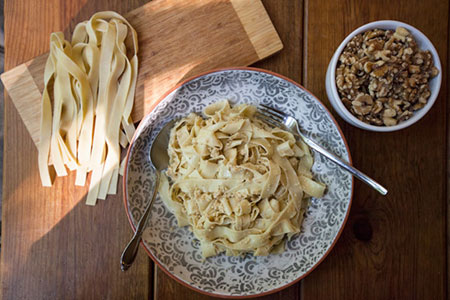 Salsa di noci is a beautiful, subtle sauce that’s traditional to Liguria. Peeling the blanched walnuts can be laborious (it takes about 20-30 minutes) but it makes an incredible difference. With the peel, the sauce retains the astringency of the walnut. Without peels, the sauce is rich and elegant, with a meat-like texture.

Blanch walnuts in boiling water for 5 minutes. Drain, then place walnuts into a bowl of cool water. Let sit for a few minutes, then peel off the skins (using a paring knife helps).

Place the drained and peeled walnuts in a food processor and pulse until evenly chopped. In a mixing bowl, combine the chopped nuts with olive oil and cream, and then add salt, pepper, and nutmeg to taste. Continue to mix until evenly blended.

Bring a large pot of well-salted water to a boil and drop in the pappardelle. Cook for 2-3 minutes, stirring constantly. Strain the pasta when it is ready and return it to the pot along with the walnut sauce. Toss until evenly coated. 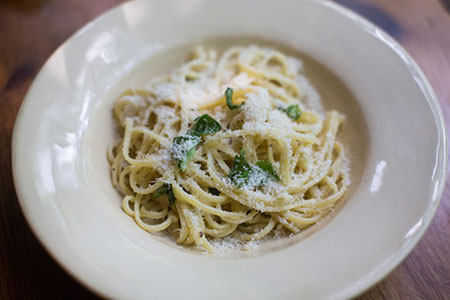 Here in the U.S., this is an overlooked classic. But in southern Italy, particularly along the Amalfi Coast — home of Sorrento lemons and limoncello — spaghetti al limone is very popular. This version calls for long, flat trenette, which is similar to linguine, but thinner. The basics are the same: lemon, butter, basil, and Parmigiano-Reggiano. The trick is to use lemon zest as well as the juice for a fresh and lively sauce, a perfect accompaniment to grilled fish.

Zest of one lemon

Juice of half lemon

Bring a large pot of well-salted water to a boil and drop in the trenette. Cook according to the package instructions, stirring constantly.

When pasta is almost finished, melt butter in a large skillet. Add zest, juice, salt, and pepper and heat on low for 1 minute.

Strain the pasta when it is ready and then add it to the skillet and toss. Add basil and Parmigiano-Reggiano and toss until the trenette is evenly coated. Serve with more grated cheese at the table. 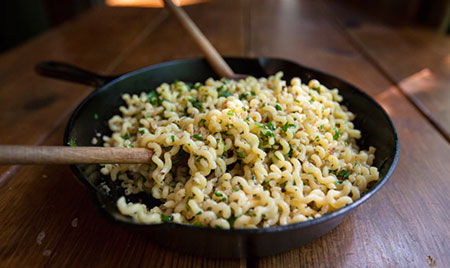 In this walnut pasta variation, there’s no peeling the nuts. It’s bold, peppery, and fresh. For fusilli col buco, look for the long, curly kind, not the shorter one that is sometimes confused with rotini in the U.S.

Melt 4 ounces of butter in a skillet. Add the walnuts and peppercorns and cook over low heat for 3-4 minutes, stirring constantly. Remove from heat and stir in parsley. Set aside.

Bring a large pot of well-salted water to a boil and drop in the fusilli. Cook according to the package instructions, stirring constantly. Strain the pasta when it is ready and return it to the pot, tossing in the last tablespoon of butter. Immediately add the pasta to the skillet and toss with walnut-parsley-peppercorn sauce until evenly coated.