I love the word pretty.

A theory: “Pretty” has gone out of favor because we are greedy, and want the merely pretty to be fully beautiful, and so we go around calling things beautiful that are pretty.

There’s something self-flattering about it — describing a thing as beautiful makes the speaker appear more sensitive to beauty. Conversely, “pretty” always sounds like an understatement, and as such can actually be more flattering to the thing described.

I love especially when men, or straight men, say the word pretty. Women, or straight women, are trained to recognize prettiness, or admit freely when they do. So there’s something endearing about a man calling an object — a bit of music, a tennis shot — pretty; it’s a moment of vulnerability. I also love a straight man in a pink shirt.

I noticed the word “pretty” used twice recently, in art, to describe “the other woman.” In the film Blue Jasmine, Cate Blanchett’s character describes the yoga instructor her husband is — unbeknownst to her — fucking as pretty: “Isn’t she pretty?” After her sister tips her off that something is going on, she says it again, this time suspiciously, to her husband: “She’s so pretty.” (Blanchett herself would rarely be described as pretty; there’s too much seriousness to her beauty.)

In the novella Walks with Men by Ann Beattie, Jane is surprised on her front steps one morning by a woman who turns out to be the wife of her (20 years older) boyfriend. The wife, Lisa, says, “You’re pretty. I wouldn’t have expected otherwise. I’m pretty too.” And then again, just before she leaves, more disdainfully: “Oh you really are pretty.” Lisa, who is older than Jane but younger than her husband, admits she had hoped they would be friends: “But there’s no spark between us. Am I wrong?” Jane concedes: “I don’t really feel drawn to you.”

In both scenes, pretty turns quickly to an accusation. Beautiful suggests depth, even profundity. But not pretty — prettiness entails lightness; it’s fleeting, flimsy. Calling someone pretty — or worse, cute — can be diminishing.

Sianne Ngai, the author of Our Aesthetic Categories, has said that “cuteness is a way of aestheticizing powerlessness”:

It hinges on a sentimental attitude toward the diminutive and/or weak, which is why cute objects — formally simple or noncomplex, and deeply associated with the infantile, the feminine, and the unthreatening — get even cuter when perceived as injured or disabled.

This is why we want to do violence to cuteness — or, rather, why we feel protective of cuteness, a countermeasure to the instinct toward violence. I think often of this shocking image I saw on essayist Alice Bolin’s Tumblr, a kitten wearing blush: 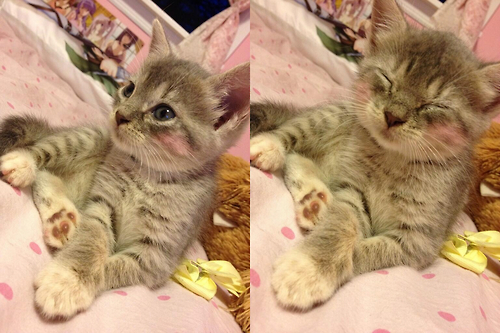 To attempt to make a kitten, the epitome of cuteness, cuter: It’s madness!

I have been contemplating Debbie Harry’s face, its planar impact. It is not really cute or pretty or even beautiful, but sublime — it feels like a cultural accomplishment, like the Sphinx. We should project it into space. It should be on the Sphinx. 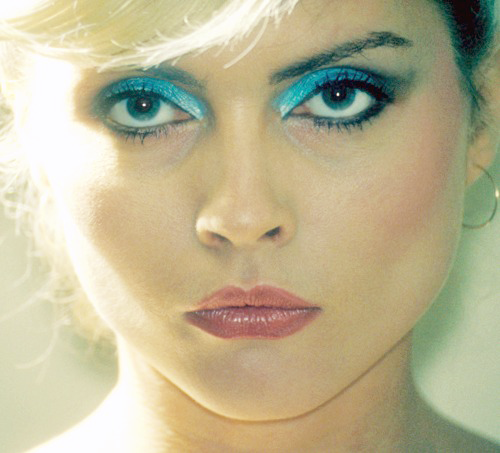 Sublimity requires awe — almost fear, doesn’t it? I flipped through my copy of Terry Eagleton’s Ideology of the Aesthetic from grad school; I had not recalled that it paints Edmund-Burkeian sublimity as practically a loathsome side effect of testosterone (boldface mine):

The very conditions which guarantee social order also paralyse it: sunk in this narcissistic closure, men of affairs grow effete and enervated, sympathy becomes cloying and incestuous, and beauty sinks to a byword of stagnation. Some countervailing energy is therefore necessary, which Burke discovers in the virile strenuousness of the sublime […] The sublime is on the side of enterprise, rivalry and individuation: it is a phallic ‘swelling’ arising from our confrontation of danger, although a danger we encounter figuratively, vicariously, in the pleasurable knowledge that we cannot actually be harmed. In this sense, the sublime is a suitably defused, aestheticized version of the values of the ancien regime.

This is why it’s so easy to aestheticize war from a distance: frisson of danger, no real danger. Like pretty becomes something that can be crushed, sublime becomes something that crushes. Kant called it Das Unform: “the formless or monstrous.” I tried to watch Apocalypse Now and was horrified: impossible, maybe, to critique war in film without also glorifying it. The horrors of war are what make war necessary; critique as propaganda. (I say I was horrified; I was also bored.)

Supposedly, the mere exposure effect explains why we prefer a mirror image to a photograph — familiarity alone breeds appreciation. And yet: The familiar is pretty, the unfamiliar beautiful. (But if beauty is rare, it would have to be unfamiliar; aesthetics can be circular.) Killingly this effect would seem to explain away much of aesthetics, and perhaps why we find our long-term partners “more beautiful now than ever” — we look at them all the time — and yet prefer our younger selves. A few glances in the mirror each day can’t compete with all our memories of past images, becoming idealized and multiplying each time we access them, almost infinitely. •

Photos via Tumblr and by andrew_lf via Flickr (Creative Commons)