Whatever happened to viognier becoming “the next chardonnay”?

That’s what they told us back in the 1990s, when I was a young man first stumbling into wine. I drank a lot of viognier back then. You couldn’t avoid it. Viognier was found on nearly every wine list you’d encounter. Now? I almost never see it, and I don’t know a single person that says, “Boy, I’d really love me some viognier tonight.” Viognier feels like a vestige of an era when Microsoft might hire Matthew Perry and Jennifer Aniston to show people how to use Windows 95.

Sometimes, no matter how hard the marketing people and the sommeliers and the wine writers push, a grape just never catches fire. Remember in the not-so-distant past, when torrontés was going to be “the next pinot grigio”? Last year, I heard a lot of chatter about chenin blanc being “the next riesling.” I guess we’ll see about that one.

By the way, how’s that whole sherry renaissance thing working out?

In the late 1980s, only about 80 acres of viognier were grown in the entire world. By 2005, this had exploded to 14,000 acres, grown in places as far-flung as Australia, California, and even Virginia. “Viognier truly is the flavor, and I use the word advisedly, of the year,” said Jancis Robinson in 2005.

A decade later, it seems preposterous that anyone believed viognier would become so popular. “Did we really believe it would be the next chardonnay?” asked Jon Bonné, San Francisco Chronicle wine editor, in 2010. “Of all the white Rhône-native grapes, it has the greatest tendency to go off the rails.”

Still, I’ve always had a soft spot for viognier. And this past spring, driven perhaps by some serious 1990s nostalgia, I got onto a viognier kick. I’m a much different person – and totally different wine drinker – than I was back then, and so my tastes this time around drifted from Californian viognier and towards the Rhône, and inevitably Condrieu.

It is fitting that Condrieu is the ultimate expression of viognier – quirky, rare, strange and, above all, beautiful. Something about aromatic Condrieu is notoriously difficult to describe. During our tasting, my creative director, who regularly tastes with me and has a good palate, started her description of one bottle by saying, “This is like a perfume I’d actually wear … Um … Incensey? … opening up to Curious by Britney Spears?” She then trailed off, throwing up her hands and saying, “These are hard! I am not qualified for this tasting!” 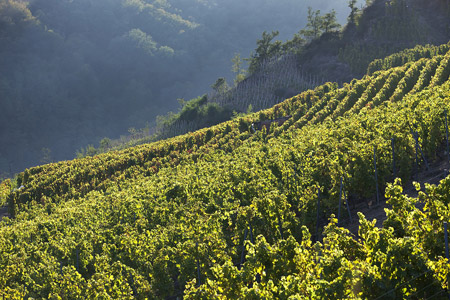 Perhaps this is why Condrieu makes wine writers’ prose turn multiple shades of purple. They practically orgasm on the page. Celebrated novelist-turned-wine-writer, Jay McInerney, in his book Bacchus & Me, writes that Condrieu “lingers like the song of Keats’ nightingale”. McInerney also claims that, when you smell the aromas, “you might imagine that you’ve been dropped into the Garden of Eden, or Kubla Khan’s Xanadu as described by the opiated Coleridge”. Further, he suggests that “if orchids had a scent, this might be it”. Finally, he tells us, “Drinking Condrieu can be like stepping inside a painting by the Tahitian-period Gauguin.” Wow.

It’s also fitting that McInerney is one of viognier’s greatest advocates. After drinking so much Condrieu and lesser viognier over the past months, I’ve come to see viognier as akin to second-person narration in fiction writing. The most well-known of McInerney’s novels, of course, is Bright Lights, Big City: “You are not the kind of guy who would be at a place like this at this time of the morning. But here you are, and you cannot say that the terrain is entirely unfamiliar, although the details are fuzzy.”

When the second-person works, it is immediate, off-beat and breathtaking. Unfortunately, it doesn’t usually work. Like many young wannabe novelists of my era, I wrote terrible second-person faux-McInerney stories. I believe a lot of New World viognier is too often poorly executed in the same way.

The best viogniers, however, are intriguing and strange in the best way. Tasting a bottle like Paul Jaboulet Ainé Domaine des Grandes Amandiers 2010 (possibly the finest 100% viognier in the world) is to grasp the grape’s potential. And Clusel-Roch Cuvée Vechery Condrieu 2012, with its flavors of cantaloupe, aromas of thyme and dill, and a salinity that leads to a long, savory finish.

These are not cheap wines, running from $60 to $90. Nor are they easily available. Which is why I was happy to find the Penner-Ash viognier 2012 from Oregon at my local shop. It’s probably the most drinkable American viognier I’ve tasted, at about half the price of Condrieu.

It made me start speaking to myself in the second person: would you call this bottle the next chardonnay? Of course not. But you would call it a pretty damn delicious viognier. • 21 July 2014