I grew up in a world that some people might consider a paradise. Or was it more like hell? In any case, I was regularly surrounded by naked strangers. Sometimes I knew these encounters were coming my way, while other times they took me by surprise.

The scene was Europe in the early 1970s. I can remember long-haired students running naked through the streets of West Berlin, my home town. These “streakers” were so fast that those in the vicinity only glimpsed them for a moment. As far as I can recall, the streakers’ physical exploits were not tied to any political agenda. I think they simply enjoyed shocking or provoking people by intentionally pushing boundaries – but I was too young to have an opinion about it or even find it all particularly interesting.

I was also ambivalent — to say the least — about going to the sauna with my parents. No matter how energizing it was to bake at high temperatures and then dunk into the cold water, sweating together with complete strangers of both sexes in a small space was simply embarrassing. At the time, it never occurred to me to wonder if they wanted to show off their nakedness and see other people naked too, or if they were just naked because the circumstances required it.

A summer vacation I spent on the Croatian island of Krk, one of the largest islands in the Adriatic Sea, was somewhat unpleasant for slightly different reasons. During the day, everyone took a boat to a pebbled beach to roast naked in the sun. There was a restaurant where all the guests gathered to eat their sandwiches and fries — seated stark naked at the tables! I can remember that I found some of the bodies more appealing than others, but I couldn’t yet understand why. Vacation spots like these were especially popular in France and Yugoslavia. 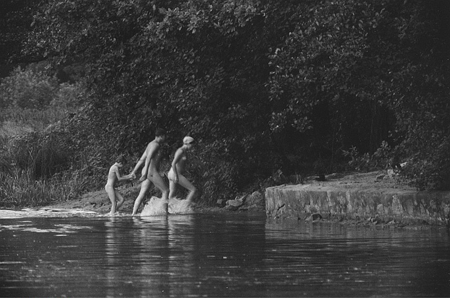 I don’t resent my parents for these experiences: they were just doing what enlightened parents did in those days. Parents believed that children should be raised to not be ashamed of their naked bodies. If you voiced your discomfort, you were in for a lesson about how unjustified such feelings were. The result was a sort of shame about being ashamed. I often find myself thinking back to on these vacations, but I don’t think they left any lasting damage.

The same could be said about other vacations I spent on Sylt, a popular German island in the North Sea near the Danish border. Once again, some of the beaches were reserved exclusively for nude vacationers. But during a day trip to the neighboring Danish island of Rømø, I encountered a new “threat”: the supermarket where we stopped to pick up some groceries had a bargain bin full of pornographic magazines. Although I remember feeling uneasy at the sight, my childhood innocence remained largely unscathed. I was left with an odd memory, but no need to see a therapist. On the other hand, I would have been just as happy to skip the whole incident — if I had had a choice.

Today I have a better understanding about where I found myself as a child. The public nudity movement of the 20th century was born, in part, in Central and Northern Europe. Germans’ comparatively relaxed attitudes about their bodies are rooted in the relatively liberal atmosphere that reigned in these regions in the early 20th century. Admiration for Greek classicism and the romantic condemnation of civilization formed a symbiosis that carried an implicit promise: if you surrendered your skin entirely to the sunlight, you could achieve reconciliation with nature. It’s no coincidence that the discipline of sexology emerged from the same context. Nudity was considered a way of life that nourished the body, mind, and spirit. The whole business was supposedly more or less asexual, or at least the potentially erotic aspects were downplayed. Unclothed bodies represented a backlash against urbanization and an escape from bourgeois conventions. The ideology and appearance of nudity’s practitioners were influenced by a range of political viewpoints — those of middle class sophisticates, leftist proletarians, and nationalistic groups. After initial resistance, even the Third Reich eventually learned to love nudity. You may have seen Leni Riefenstahl’s photos of nearly naked “Germanic” individuals sporting nothing but loincloths. After the Second World War, nakedness in semipublic space was a tough sell until the general liberalization of society in the 1970s relaxed attitudes toward it again. Nudity was especially popular in East Germany, in part because the church had much less influence there.

In the back of their minds, nudity proponents of every stripe harbored the romantic notion that humans are naked in their natural state and feel no shame about it. This belief provided the underlying justification for every gospel of nakedness — but we now know that it is mistaken. People in every culture feel shame, although its specific causes may vary. It’s true that some indigenous peoples once classified as “primitive” or “uncivilized” (fortunately enlightened people are now critical of such presumptuous judgments) still live entirely or nearly naked. Among the Yanomami, who live in the region along the border between Venezuela and Brazil, a women may wear nothing but a thin cord around her hips. A man, in turn, tucks the foreskin of his penis under a belt — and gets embarrassed if the belt slips. The Kwoma in New Guinea wear nothing at all, but their gaze is subject to strict taboos. Men are forbidden from looking at a woman‘s genitals or breasts. If a man and woman happen to meet — perhaps as they walk along a path — they will stand back to back to talk with each other.

Shame is one of the things that distinguishes humans from other living creatures. But the naked body itself isn’t “obscene”; where and how it’s shown makes the difference. Behavioral researchers believe that humans stopped having sex in front of other people millennia ago, and that people have been covering up their genitals for at least 100,000 years. Medieval nuns and monks took the whole idea of clothing to an extreme, with wide habits that hid the forms beneath them and disembodied their wearers. But there was another side to the Middle Ages as well. Images from the 14th and 15th centuries show naked men and women splashing happily together in the public baths. At the same time, cultural historians like Germany‘s Hans Peter Duerr tell us that these places were essentially bordellos. Of course, no one really knows what kinds of things went on dark back then. Finally, no view of nakedness would be complete without a reminder that in some religious traditions nakedness is an essential element in certain rituals.

This is all very condensed, but I’m trying to say that there’s nothing natural about how humans deal with their nakedness. Culture permeates every aspect of it. As a result, attempts to find a way back to any kind of natural state of unselfconsciousness are doomed to failure. The real question is whether such a state would even be a good thing. After all, shame is also a privilege of human individuality and sexuality that makes the pleasurable breaching of certain boundaries possible in the first place. Eroticism quickly gives way to desolation in places where nothing is hidden and anything goes from the get-go. What’s more, people without any sense of shame would probably think about nothing but sex. No matter how exciting sex can be in the right circumstances, such a world would actually be pretty boring. The people in it probably wouldn’t be any happier, either – but there’s no way to know for sure. 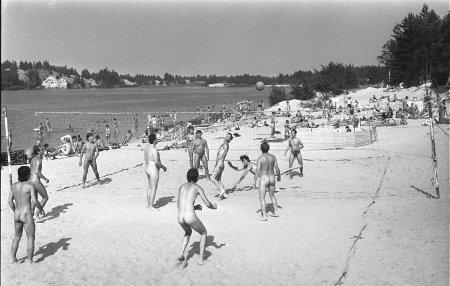 The 1970s were downright innocent times compared to today. The parallel worlds and murky depths of the Internet know no moral barriers when it comes to presenting bodies. You can fill in a few examples yourself. At the same time, greater clarity exists on a number of issues. For example, nudists or naturalists generally put up signs warning passersby that they might see naked people when they enter a certain area. In this way, they protect themselves from the potential legal consequences of their actions. They exercise their right to conduct themselves in the way they consider most “natural” — but without subjecting others who don’t share their views to the experience.

There is hardly a media outlet that doesn’t delight in reporting on femen, a Ukrainian movement consisting of good-looking women who bare their breasts as a form of political protest. The extent to which people can be carefree and self-confident about sharing their nudity with others never fails to surprise. Thanks to Annie Leibovitz and Vanity Fair, what Jeff Koons looks like naked has been public knowledge for several weeks now. The magazine’s readers can see a back view of Koons, with the front view reflected in a mirror, and his profile reflected in yet another mirror. In all three cases, the composition cleverly hides his sexual organs. He certainly looks fit – not an ounce of fat on him. Good job! Perhaps, in times like these, it’s asking too much to decide for ourselves when we want to see a naked body and when we don’t. Please don’t misunderstand me. As a European, I really can’t relate to the combination of voyeuristic fascination and moral outrage that nudity often inspires in America — the land that gave us the word “Nipplegate”. I just hope that someday someone will be able to explain why we don’t have this choice.

In the end, public nudity is not always just an expression of progress or freedom — it’s also tied up with merciless, exclusionary norms that can breed insecurity. After all, the nudity that we see in places like the Copacabana beach in Rio de Janeiro is not as innocent as it may seem. In the background, legions of plastic surgeons are busy optimizing the bodies with all the techniques and tricks at their disposal, getting them in shape to hit the stage before they are further adorned with tattoos and piercings. A German newspaper recently declared the birth of the “spornosexual” — a man who strives to look like a mixture of athlete and porn star. Achieving such an appearance is hard work; nature is stingy with figures like that. But the desire to look good when we’re naked has burrowed into the deepest layers of the modern Western psyche. Perhaps true liberation for people today would consist of not needing to be attractive in the first place?

Public nudity can be defined differently depending on where you are, and these possible forms can evoke different associations, acquire different meanings, and have different consequences. There can even be legal implications. In his 1983 book The Fall of Public Man, Richard Sennett defines the state of being civilized in terms of behavior that protects people from one another while simultaneously allowing them to enjoy each other’s company. For the American sociologist, wearing clothing and masks is part and parcel of civility. Paradoxically, such disguises are necessary for genuine sociability, freed from the constraints of unequal life situations and emotional states. As he explains, “civility has as its aim the shielding of others from being burdened with oneself.” For Sennett, this burden was not only physical. It could also take the form of excessive talk about our psychological states — the bearing of our souls, as it were. Now, 30 years after their publication, Sennett’s observations seem more relevant than ever.