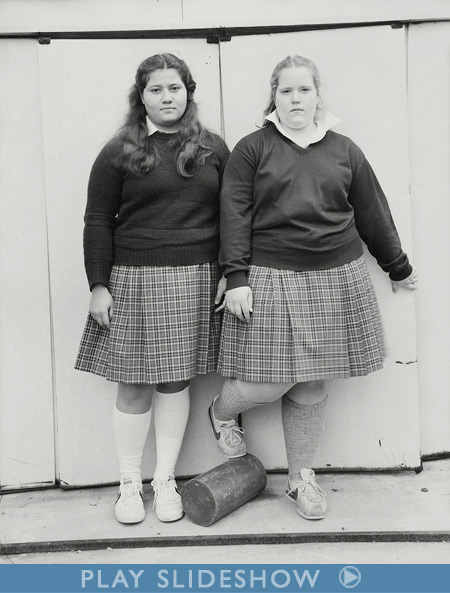 By Lyle Rexer
In Camera Lucida, Roland Barthes remarks somewhat enigmatically that in order to be a photographic portrait, a face must first compose itself into a mask. What does he mean, that the face must somehow perform for us in order to be recognized? Can we look at another person and experience that person as uncoded information — without a past, without presuming or jumping to conclusions about their present?  Don’t all portraits presume in order to give us some version of the person? Why look at them if not for that? Is it possible to let the person be, let the pure enigma of their being emerge? Surely that should be the advantage of photography, that it allows each human subject a complete autonomy.

These are questions that Andrea Modica’s portraits raise for me. The series “Best Friends,” which seems so simple on the surface, multiplies the questions behind a series of masks. Stylistically, or let’s say motivically, Modica is in very good company. These portraits have a special lineage that includes August Sander, Judith Joy Ross, and Mike Disfarmer, among others. They pursue what we might call the truth of the type, in Modica’s case the type being the psychic double. Think of Sander: Can anyone look intrinsically like “an artist” or “a tailor,” since these are merely social designations and (we like to believe) completely changeable? Just let the butcher win the lottery and see whether he stays a butcher. And yet, perhaps Sander’s project was more about composing that face and figure in front of the camera so that the mythic and familiar could play off against the utterly foreign, distinctive, and unknown. This was and is the pleasure of Sander’s portraits, that they are historically and culturally “typical” yet independently particular.  Such a response accords with the Bechers’ attitude toward their typological projects, from water towers to gas works. Each was generically determined but in their eyes embodied the mystery of same-but-different, of the individual and the template. They thought of them as portraits.

The psychic double: This is the mask Modica adopts for her subjects, mostly teenagers, themselves not yet fully formed. Again, by mask I mean that construction of the subjects that allows the viewer access to them in a socially coded, historically intelligible way. So, we know a lot about this period in young people’s lives now, how they bond by affinities, on the one hand toward mirrors, and on the other toward opposites, which are a different kind of mirror. Two Asian girls adopt exactly the same frontal pose; possibly they are the same person with a different dress and hairstyle. This is contrasted with the thin blonde turned sideways to the camera holding the waist of a more substantial dark-haired girl, who faces us directly. It appears to be a study in the relation of dominance and submission, or dependence and provision. There are complications, however, slippages of the mask.

The boys are somewhat harder to read. Their doubling gives away less. One Calvin and Hobbes pair illustrates the theory of opposites: A heavy-set teenager — dressed in the preppy garb of topsiders, khaki shorts, button-down shirt, and a tie — sports an expression straight out of a John Belushi routine. He is flanked by his trim, handsome and more defensive companion, who, as occurs in other photographs, does not face the camera head on. The boys tend not to touch each other, certainly not embrace, and to adopt attitudes suggesting they have something to prove to the camera, as we might expect, given that the photographer is a woman, or less directly, that the camera’s gaze is perceived as feminine. But we also read their expressions through a media lens, particularly that created by the episode of Columbine High School. It is difficult in our culture to adopt a neutral attitude toward teenage male friendship. There is an anxiety that has nothing to do with sexuality and everything to do with social pathology, rebellion, and violence.

We could describe the relations among the girls as umbilical. They embrace, entwine arms, hold hands, share, merge. “Best friend” appears in the photographs as a feminine term, symbolized for me by a photograph in which the two subjects are connected by the shared earphones of an iPod. It’s like they are listening to each other. The one who faces the camera is physically more mature; the other, half turned, has the pudgy, unformed body of a boy. What are they telling each other through those earpieces about their different desires and imaginings? Do they use each other to live, and to hide from living? No wonder that so many of the photographs convey the impression that the young subjects actually look alike, when they don’t at all.

If this were an earlier time, we might make a reference to the scene in Ingmar Bergman’s Persona, in which the images of Liv Ullman and Bibi Anderson merge. But behind the apparent play of identities in these portraits, we keep glimpsing what can’t be masked or, in Barthes’ lexicon coded, not essential selves but the visual intransigence of photographic subjects. They are simply there before us in a photographic way, tempting us — or me at least — not with stories of an elsewhere that is their past and future lives, but with the fascination of how they look. I note how big the hands are of one boy and how hairy his forearms. And of course his friend’s rooster-comb hair cut, which I don’t understand at all. Two Italian girls seem to be posed next to a jail cell (surely high school can’t be like that?) and the one who hangs back, looking intently at her bolder, more confrontational friend, is slightly cross-eyed. Most compelling to me are the two girls in striped jerseys, both with hair pulled to the side in a cascading pony tail. The one on the right has closed her eyes, making it somehow impossible for a viewer to “read” the picture. The standard relationship of viewer and viewed has been cancelled while our (my) gaze remains fixed.

Like Thomas Struth in his family portraits, Modica gives us familiar information, but behind that stand subjects that can’t be assimilated to our gaze, can’t be used up as subjects. We like to say that photographs of people confer a kind of immortality — this is how they will appear forever, long after they themselves have changed and gone. But the immortality is of another kind entirely. It is the immortality of a pure image, whose inexplicable neutrality and unbreachable independence unendingly solicit avid acts of looking. • 18 May 2010