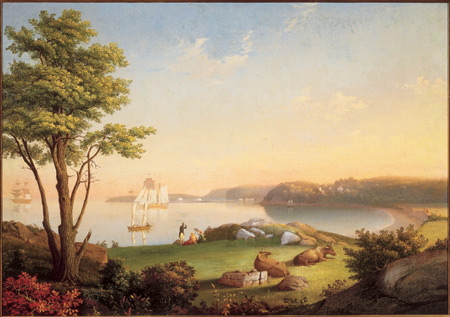 The nothing part was about wiping the slate clean. European civilization had come to America to be obliterated, and America happily obliged. The everything part was about what you’re left with after the obliteration. For 19th-century America, the everything was in Nature, which you spelled with a capital “N” and then let Ralph Waldo Emerson do the rest. Ralph would write sentences like, “The moral influence of nature upon every individual is that amount of truth which it illustrates to him.” We had lost the culture of Europe, but we had gained a relationship with Nature that gave us direct access to Truth, Beauty, and God.

This exchange of culture for truth did, however, generate a sense of anxiety. There was the feeling that it might not last, that American purity would be lost with the onward march of civilization just as it had all gone wrong in Europe. Paradise, after all, has been known to lead to The Fall.

At his wife’s house in Catskill, New York, at the foot of the Catskill mountains, ground zero for the birth of American Painting, a guy named Thomas Cole worked this all out on canvas after canvas. He painted the raw, immediate presence of Truth in Nature as he encountered it one hiking trip at a time. He also painted the worries. His five painting series “The Course of Empire” tells the story in a nutshell. The paintings are titled “The Savage State,” “The Arcadian or Pastoral State,” “The Consummation of Empire,” “The Destruction of Empire,” and, finally, “Desolation.”

You can visit Thomas Cole’s house, as did I, to this very day. It’s on the outskirts of the town of Catskill across the street from a gas station. Currently, the second floor of Cole’s house is occupied by a small show called “Remember the Ladies: Women Artists of the Hudson River School.” The phrase, “remember the ladies,” is a quote from Abigail Adams, who once advised her husband John to do just that.

The women of the Hudson River School do not get remembered very often. All the worse for us, as we don’t get to see paintings like Mary Blood Mellen’s “Field Beach.” “Field Beach” is a pastoral number firmly in the Cole tradition. But also, not. The light is different, more diffused and eerie than anything you’d get in a Cole painting. There is something special, too, about those cows in the foreground. Neither fully beast, nor fully domesticated, they make for an unclear symbol. That’s why the painting is great. All the portending you’d get from Cole is absent. The story of Truth found and Truth lost is nowhere to be found. This place, this evening on an American beach along the Hudson tells us nothing about what shall come to pass. Europe is far away on Field Beach, but not so far away that you can’t see a ship laden with its goods at the painting’s far left. The picnickers on the shore are dressed in all their fineries, but a provincial air wafts off them all the same. Mary Blood didn’t paint this scene in order to tell us that it is good or bad, just that it was real. That’s why she spent so much time on the evening light. I’ve spent a fair amount of time with the evening light along the Hudson. And Mary Blood was right. It looks that way. • 20 May 2010