Sometime between 7,000 and 5,600 BC, along the banks of the Yellow River, an early inhabitant of modern-day China left behind a jug that was once filled with the earliest known example of a fermented grain beverage. With no written recipe or recorded history of the Neolithic concoction, the contents of the vessel were left to evaporate and decay during its long burial, fading into the past. Today, however, roughly 9,000 years later, you can go to your local beer store and walk out with an alcoholic concoction brewed to that seemingly lost ancient recipe. How is that possible? Through the unlikely union of traditional archaeology, modern chemical analysis technology, and the adventurous craft-brewing industry, tasting a 9,000-year-old beer has become as easy as picking it up off the shelf.

It’s been known for a while that some of the earliest civilized humans brewed beer. The almost 4000-year-old “Hymn to Ninkasi,” a song to the Sumerian goddess of brewing, contains instructions for a primitive brewing technique. In the archaeological world, however, you’re much more likely to find fragments of jars and pots strewn throughout a dig site than intact ancient recipe books. These vessels occasionally bear tempting red and yellow stains teasing researchers about the identity of their ancient contents. By applying procedures often found in analytical chemistry labs to these prized artifacts, researchers can surmise the vessel’s ancient contents.

But why should we care what our Stone Age ancestors were drinking? Well, if you ask some experts in the field, they’ll tell you it probably had a lot more to do with our evolution as a civilization than the environmental and economic factors we’re taught in history class. One such expert is Dr. Pat McGovern, a notable pioneer in the fascinating field of experimental fermented beverage archaeology. In his book Uncorking the Past, he contends that what really drove the development of our species are “the uniquely human traits of self-consciousness, innovation, the arts, and religion, all of which can be heightened and encouraged by the consumption of an alcoholic beverage.” By this ideology, bringing these beverages back to life can give us unparalleled insight into the path our species has taken to get to where we are today. 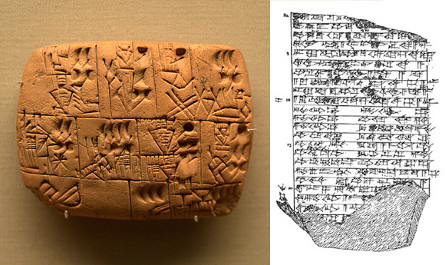 Left: A Sumerian tablet from around 3,000 BC records the allocation of beer rations to Sumerian workers. Right: A rendering of one of the tablets showing the “Hymn to Niniski”

Dr. McGovern has used this motivation to resurrect a wide-array of beverages, including the aforementioned Neolithic Chinese brew and the earliest known barely beer, discovered in a dig site dating back to 3500 BC in modern-day Iran. His process is reminiscent of a crime-scene detective’s, utilizing physical, chemical, and historical evidence to piece together a fragmented puzzle. But unlike what you may have seen on CSI, you can’t simply pop a stained piece of pottery into a futuristic machine and get a printout that lists what’s inside. You have to know beforehand what you hope to find.

“We try to infer from other evidence what a particular region’s fermented beverages might have been, and then tailor our chemical techniques to discovering the biomarkers for specific natural products,” says Dr. McGovern. Take the example of Godin Tepe, the Iranian dig site where the earliest evidence of a barley-based beer was discovered. A vessel was unearthed that displayed a yellow residue embedded into grooves that were carved into the inner cavity of the pottery. These grooves hinted at the Sumerian pictogram known to represent beer: an outlined jug with hash-marked lines adorning the interior. On top of this, textual evidence showed that beer was a popular beverage amongst the people of the time, and archaeologists found a large amount of barley at the dig site. Put it all together, and you can make a case that the vessel once held a barley beer.

There’s just one small issue. “We don’t have many biomarkers to use for carbohydrate-based fermented beverages,” says Dr. McGovern. It took a clever connection between the identity of the yellow residue found within the vessel and a key side product of brewing to prove that it was actually beer in that jug. Calcium oxalate, better known as beerstone, is a residue that forms on the interior of brewing equipment and serving tanks that requires serious cleaning to remove, usually with caustic cleaning solutions. To test for beerstone, Dr. McGovern and his team analyzed the residue using a Feigl Spot test. To perform this, a sample of the ancient residue was exposed to a specific compound that causes the mixture to undergo a color change. If the same color change is observed when tested on real beerstone, then the yellow residue must contain beerstone. The test was confirmed by an identical result on beerstone freshly scraped from the tanks down the road from the University of Pennsylvania at Dock Street Brewing in Philadelphia. The Egyptians loved beer, too. This model recovered from a tomb shows how beer is brewed.

Feigl Spot Tests are just one of the many techniques Dr. McGovern can use to identify compounds within ancient artifacts. His team has used a number of standard analytic chemistry lab techniques, all with equally intimidating names like Fourier Transform Infrafred Spectroscopy, chromatography-mass spectroscopy, and solid-phase microextraction, to analyze these vessels. Most recently, his team worked on artifacts found in various sites in Denmark and Sweden that once held ancient Nordic grog, a term loosely used to define beverages containing multiple fermentable sugar sources. With the help of this chem-lab technology they were able to detect the presence of tartaric acid, which hints at the presence of grapes, a group of plant compounds associated with lingonberry and cranberry, and traces of other compounds related to juniper berry, bog myrtle, and yarrow.

But rather than stop at a list of ingredients and a journal publication, Dr. McGovern has been taking his work one step further. Using these results and other evidence from Nordic dig sites, Dr. McGovern and Dogfish Head’s Sam Calagione teamed up to bring this ancient grog, along with several other brews, back to life. Named Kvasir after a Nordic deity born from the spit of other gods, this orange-hued brew is made with wheat, cranberry, lingonberry, bog myrtle, yarrow, honey and birch syrup. The result is a tart and complex beer that is packed with spice and floral notes. Instead of coming off as a gimmick, Kvasir feels and tastes more like a refined museum artifact that should studied and pondered. Instilling this millennia-old historical accuracy into a large-scale production beer is certainly no easy feat. It’s a tricky task that calls for innovation and compromise.

A prime example of this is Dr. McGovern and Dogfish Head’s most ancient of ales, the 9000-year-old Chinese elixir known as Chateau Jiahu. Chemical analysis and archaeological evidence showed that the brew was rice- and honey-based with hawthorn fruit and grapes added. Rice, like all other grains, must first be malted before being brewed. This step converts the starch within the grain to fermentable sugars. In ancient times, this was most likely done by chewing the grain and spitting it out into the brewing vessel. No brewer in their right mind would try to sell a pre-chewed beer, though right? Well, not quite. The team decided to give it a shot and had a home-brewer test out the method for them, with less than spectacular results. So, instead of chewing, they used an ancient Chinese mold related to the kind used for sake. Since the original test batches, this has been replaced with more practical brown rice syrup, a pre-malted rice product.

On a side note, Dogfish Head did actually go on to make a traditional Peruvian beer called chicha that uses pre-chewed corn. Brewery employees were allotted an individual amount of corn to chew and spit out, which was collected and used to make the beer. It was later put on tap at their brewpub for public consumption. Now that’s dedication to history.

To finish Chateau Jiahu, hawthorn fruit, Chinese grapes, and Chinese wildflower honey had to be sourced. The team was forced to substitute American wildflower honey and Muscat grapes, but, after scouring the country, eventually found a supplier for hawthorn fruit. Circa 7000 BC, fermentation would have occurred spontaneously, most likely from a combination of yeast living on the skins of the fruit, natural airborne yeast, and leftover yeast within the brewing vessel. While Chateau Jiahu does undergo some fermentation from fruit-borne yeast, for practicalies’ sake, the majority is carried out by Japanese Sake yeast, a direct descendent of ancient Chinese yeast strains.

Chateau Jiahu is a brew that must be experienced with an open mind. Beer certainly isn’t the first word that comes to mind when taking the initial sips. Sweet and complex, with subtle grape and white flower nuances, this ancient concoction drinks much more like a dessert wine. I’d suggest slowly enjoying this contemplative brew while relishing in the thought of consuming something that hasn’t been tasted for 9000 years. It certainly makes for quite a drinking experience. In addition to Kvasir and Chateau Jiahu, Dogfish Head bottles and distributes several other ancient ales, the most readily available of which I’ve listed below. These ales combine the fields of archaeology, analytical chemistry, and brewing to produce a truly cross-disciplinary feat of science and innovation. As interesting to learn about as they are to taste, they provide one of the rare instances when we can actually place ourselves in the shoes of our ancient ancestors. Thanks to the clever, groundbreaking work of Dr. McGovern’s team and the off-centered ambition of Dogfish Head, time travel becomes as simple as pouring a beer. •