A few years back, while I was driving through the States, I passed a hitchhiker holding a sign that read “Hiking for Beer.” This abstruse notice made me wonder. Was he offering drivers beer for their service or if this were the goal of his trip — to hitchhike in search of the best beer across America — did he hope motorists would empathize with his mission? But I also got this idea in my head: I could hike, too, but proper hiking…for beer.

I had trekked a number of impressive trails. They provided a communion with nature; a temporary retreat from modern distractions; an enhancement of necessities, making the simple feel luxurious. A bag of gorp was forest caviar. Tap water from a rusty faucet tasted as if it had flowed from the purest mountain spring.

But after a long walk among green trees or russet mountains, nothing compared to drinking a golden brew; this was a luxury heightened to the libations of royalty. Of course, a beverage of this nature was never actually enjoyed in nature. Typically, after a hike I would have to scrape off the mud from my shoes, scan my body for ticks, and then jump into the car and drive out of the forest if I wanted to end with an ale.

In 2012, Wales completed their 870-mile coastal path, making the country’s entire coastline accessible to hikers and becoming the only nation in the world with a continuous coastal walkway. Since myriad Welsh cities and villages dot the coast, I realized that my commute to the pub after the hike would probably be supplanted by instant gratification. But it seemed too good to be true: A pint at the end of the path.

When I arrived in Pembrokeshire, the Welsh county that points out toward the Celtic Sea, I took to the trail. On the first few days, I discovered pubs like the Farmers Arm in St. David and the Golden Lion Inn in Newport, towns near the middle of the coastal trail. But both establishments were about half of a mile from the trail. This was more like a pint close to the path. Was this acceptable? No. I didn’t want close; I wanted on. I wanted to step from nature into hospitality. I wanted to stand at a pub’s threshold, calves muddied with trail dirt and an expired water pouch inside my backpack, wondering if I was hearing the froth of lapping waves against the shore or the splash of beer running down the side of a pint glass. So, I kept searching.

At the Golden Lion, while I washed down some lamb chops with a locally brewed ale, I was telling a Welshman of my spirituous pursuit. He told me about a town called Porthgain and the pub along the coastal trail.

So at the crack of dawn, I rode back toward St. David to a place called White Sands Bay. A few people had gathered there early. But they hadn’t come for the pilgrimage to Porthgain; they stood before a mound, which was downstream from where a few campers urinated beside their tents. The mound was holy, as it was connected to a Welsh boy named Patrick — better known as the Irish patron saint.

Pirates, as it is believed, had abducted Patrick from this very spot. In slavery, the boy performed his miracle: He converted his captors. So a church had been built to honor this event, but was subsequently destroyed, leaving this site as a consecrated pile of dirt.

The only miracle I cared about was yeast’s liquid collaboration with the trinity of barley, malt, and hops. I began the nine-mile huff down the coastal trail for Porthgain. 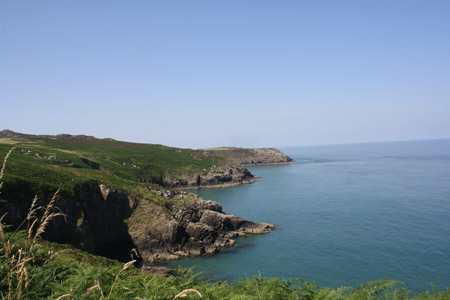 While I was clearly hiking for beer, on the coastal trail, it was easy to lose sight of that culminating reward. As I winded along the precipices, I found myself pausing often for nature, staring at all the unexplored splayed out before me (or trying to figure out a way to circumvent a few dozen horses grazing on the trail). The cliffs stood in the royal blue waters, rimmed at the base with bleached lichen and striped just above that with another pioneer organism that was tar black. Atlantic gray seals periscoped their snouts from the sea, while their comrades laid camouflaged atop boulders. Only six white sailboats cruised the expanse of the Bristol Channel.

The trail felt like a Dylan Thomas poem. I understood why the Welsh writer had felt most comfortable in that economical genre. It was the best way to depict the beauty of his country—one where the perfection of the land repeats as the rhythm of the headlands flow from cove to point like scales on sheet music. It was the finest way to offer an encomium to the dramatic cliffs and fern hills purpled with heather, knighted with Queen Anne’s Lace, populated with butterflies landing on buttercups, with gulls traveling as mutely as the songbirds hiding in the bush hunting the sprinkler-sounds of crickets.

While much of Thomas’s settings were inspired by the Welsh countryside, most of his characters were developed from eavesdropping and observing life in his watering holes. This was the land where nature and beer were perfect partners. I quickened my pace.

I only passed a few people that day, mostly because the temperature was a soaring 75 degrees Fahrenheit and the Welsh declare any day above the 60s a period of rest. When I came across a French couple risking their lives to gaze down upon a seal colony, I asked them about my remaining distance to Porthgain.

They argued whether it would be two or three hours, but both agreed that I should stop at the Sloop Inn for a beer. “They have three Welsh beers, from light to dark,” the husband told me excitedly. “We came from there this morning.”

I continued past rocky tors that sat like black boils on the backs of green hills. Seventy million years ago, these igneous protrusions had been islands when much more of the world was underwater. I rounded headlands and remained captivated by this unchanging landscape. Then the wind carried the voice of a child.

I spotted a black cormorant drying its wings on a rock below. Beside the bird was a neon-rimmed tidal pool pulsing with life. A kayaker slipped from a hidden cove. The beach was busy with families.

As I continued to walk, I pronounced the name of the town, “Porthgain,” to myself, repeating it like a drunken cheer, thrilled that I had arrived. The town’s name began to sound as if I were slurring my request for a “porter again.” I reached the road and looked for the Sloop Inn, but it wasn’t in sight. The pub-at-the-end-of-the-path feeling that I had expected was supplanted by an I-drank-too-much-after-an-all-you-can-eat-buffet queasiness. I spotted a sign. It read Abereidy.

“Is this Porthgain?” I asked a man.

This was both good and bad news: Good because there was still the possibility of a pub at the end of the path. Bad because I wanted my pint already.

I ran the beach and up the hill, passing a family schlepping their picnic up to a wheat field that had recently been reduced to stubble. It stood golden under the sun. The family had left their cooler unattended to go porter more porter, I imagined. Resentful, I had a moment of criminal considerations, but shook it off and pushed forward for the Sloop Inn.

The first of the two miles presented a series of barren and jaundiced fields. I started to jog and eventually came to a partially destroyed brick building that stood on the next headland. I stepped forward to get a better view and noticed that the beach, hundreds of feet below, had a message written out in rocks. At first, I could only read some of the letters: “OP IN.” I shuffled forward to read what I guessed would be the one sadistic letter remaining, the “H” to precede “OP.” But instead of encouraging some poor bugger to take a plunge just before reaching the saloon, there was a rock-made arrow pointing in the direction that I was traveling. Additional stones completed the two words: SLOOP INN. This time I ran. 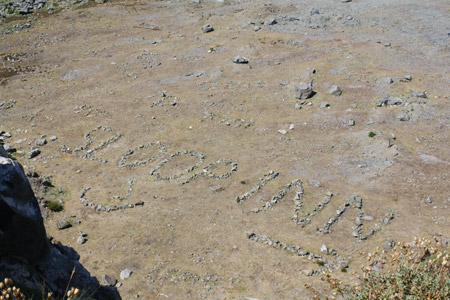 The Sloop Inn stood feet from the trail. The sight of golden ales glimmering in the sun as other hikers and non-hikers sat on the outdoor patio staring off at the deep blue waters lapping against moss-covered rocks on the shore was beatific.

Inside the inn was a series of nooks and crannies — rooms for drinking and those for games; seats reserved for regulars and ones for the rest. The Sloop Inn looked as if a tsunami had rushed through and deposited all the debris of Porthgain in the rafters of the bar, like old-fashioned glass buoys, rusted boat propellers, and a record-sized crab pinned to a plaque like that of a miniature moose head. The interior designer must have been a rogue wave.

I walked over to the bar and saw the line-up of three beers that the Frenchman had told me about. (Only two, however, were from Wales.) I took a rather long time to decide, as if I had hiked all this way to sip from the Holy Grail. One tap had a picture of a serious looking reverend whose face could have been placed on currency. The other tap read “The National Ale of Wales” and featured double red dragons on the lever. I went with the latter, Felinfoel’s. The brew was warm, as most Welsh beer is served. “Beer is meant to be warm,” a local told me. “You get all the flavors that way.” (Back in the day, some Welshmen even kept irons in the fire and dipped the scalding metal into their pints before taking a sip.)

I drank, savoring every heat-enhanced drop. My pint at the end of the path. Then I started to wonder about the French couple hanging over the precipice. They had started from the Sloop Inn. Had they really hiked the trail after a beer or two? Had they been drunkenly staring down at that colony? They were mad. (If they were still part of this world.) But then again, madder would be bypassing the pub at the end of the path (or in their case, at the start). • 12 September 2014