I ducked into the main branch of the New York Public Library at 42nd Street and Fifth Avenue on a cold January day and found myself in one of its frequent free exhibitions, this one on the halls of the third floor (there are also exhibits on the ground floor). The show was of prints by two nineteenth-century artists: the British J.M.W. Turner and the American Thomas Moran.

The prints in question were mostly etchings and engravings. These techniques are not widely understood by the general public, but it helps to know a bit about them in order to appreciate the intricacy and finesse of the art on display.

An engraving uses a tool, called a burin, to incise a drawing into a copper plate, which is then covered with ink. The ink is wiped, leaving the grooves inked, and the plate is then printed. An etching uses a needle to draw on a layer of wax that covers a copper plate. The plate is then dipped into an acid solution that bites the lines of the drawing into it; it is then inked, wiped, and printed. Both processes are difficult — the picture must be drawn backward since the printing occurs in reverse. But engraving is more arduous since it means cutting directly into metal. The advantage is that it produces a cleaner, crisper line. Etchings are often turned into engravings, and most of the etchings in the exhibit at the Library had been done by Turner and Moran, but engraved by professional engravers.

The title of the Library exhibit was “Sublime,” referring to an experience that elevates above the ordinary, inspiring wonder and awe. The concept was first introduced in the 1st century by the philosopher Longinus, and popularized in the 18th century by Edmund Burke in his Philosophical Inquiry into the Origin of Our Ideas of the Sublime and the Beautiful. Burke’s work was taken up in the 19th century by the Romantic poets and artists, who situated the sublime experience in nature as an escape from conventional reality and an opportunity for revelatory insight.

When one thinks of the sublime in art one thinks of large paintings in vivid color — the kind of work for which both Turner and Moran are generally known: Turner for his scenes of storms at sea and of busy ports and turbulent cityscapes — most famously, his 1835 Burning of the Houses of Parliament; Moran for his great landscapes of the American West.

In the Library exhibit, however, the sublime is made small — reduced to these mostly black and white prints. 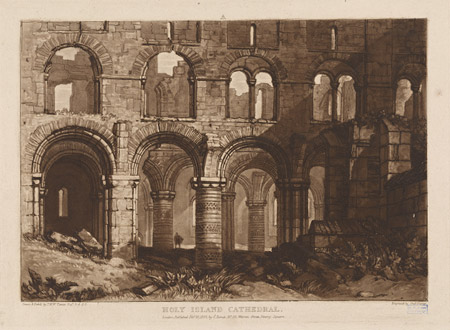 For me, the Turner etchings and engravings were a revelation. I have never quite “gotten” Turner from his oil paintings. Although I know how important he is in the history of art, I find the palette of his large works washed out and the brushstroke, muddy. But these prints were another story. He originally produced them as a group called Liber Studiorum between 1807 and 1819. They show, first, a quality of draftsmanship that one would not expect from his paintings, while also relaying a spontaneity that evokes the innovative wildness of those large canvases. If Turner’s oil scapes leave me cold, his rendering of sea and land in these prints is both dramatic and delicate. One, for example, titled “Drawing of the Clyde,” shows a charming scene of a waterfall, infused with light, breaking through into a lake surrounded by cliffs and wild trees; in the foreground, small nude bathers are discernible on the rocky shore. Sublime! — especially when one realizes that the light effects required unusual skill to create in a print.

“Drawing of the Clyde,” like many of the prints on display, were engravings done from etchings under Turner’s direction. You can see on some of them the marks where he noted the need for more highlights, requiring the engraver to deepen the incisions in the plate. In some cases, Turner did the engraving himself, and you can see him struggling with the difficult process. 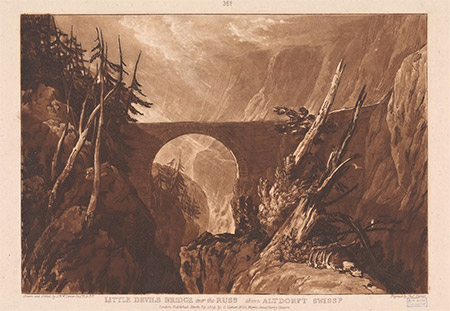 If Turner’s prints charmed me more than his paintings, I had the opposite response to those of Moran. I like Moran’s paintings — his dramatic rendering of Western landscape strikes me as proto-cinematic; no one does the grandeur of Yellowstone like Moran. But I was less taken with the prints on display here, which seemed more conventional. The best of these had borrowed from or copied Turner or took the form of chromolithographs that, through a laborious process, incorporates color. Still, it is interesting to learn that Moran was one of the American popularizers of etching during its revival in the late-nineteenth century, and helped to launch the New York Etching Club in 1877.

An added pleasure in visiting this exhibition is to wander through the great edifice in which it is housed: the Schwartzman Building of the New York Public Library, often overlooked by both natives and tourists, who assume it is just a library. But it happens to be one of the great treasures of the city — worth visiting not only for its regularly changing, free exhibition but also for its Beaux Arts architecture, which takes us back to a time when public spaces made ordinary people feel important. Grand Central Station is another such space — and New York’s old Penn Station, pulled down in the 1960s and precipitating the birth of the New York Landmarks Preservation Commission, was another. The famous line on the loss of that station was written by Yale art historian Vincent Scully: “one [once] entered the city like a god. One scuttles in now like a rat.” Fortunately, you can still enter the New York Public Library like a god.

Along with its changing exhibitions, the Library has a permanent display of manuscripts, first editions, and portraits, also on the third floor, across from the Rose Main Reading Room. The Reading Room itself is an exceptional space — worth a detour for its carved wood, chandeliered ceilings, massive oak tables, and long elegant windows. The room is currently closed for renovation, and the manuscript room has been retrofitted to temporarily replace it. It does not have the majesty of the Main Reading Room, but you could do worse than browse the prints in the hallway and then spend a few hours reading under the eyes of portraits that gaze down benignly from the walls of this sublime structure.