Until we learn what sentences can do, we tend to underrate them. We treat sentences as if they were floors, a kind of planking, something we have to walk on in order to get to the next room. We are oblivious to the reality, which is that the planking is alive and walking all over it creates a kind of hurt. Our steps harm the delicate surface and whatever lies beneath it — mystery, beauty, a soul.

Even as children, we instantly recognize a line of poetry that carries music. In time we learn that sentences, too, carry music. Some writers may go overboard and try to turn each sentence into a line of poetry, but that does a disservice to the sentence, which has its own qualities and purposes. Nobody expects a young or new writer to master all these matters at once. That’s why we call the process of writing it writing and not written. Writing takes time. It also takes us, as I’ve said before, out of time, which is a great and joyous experience. 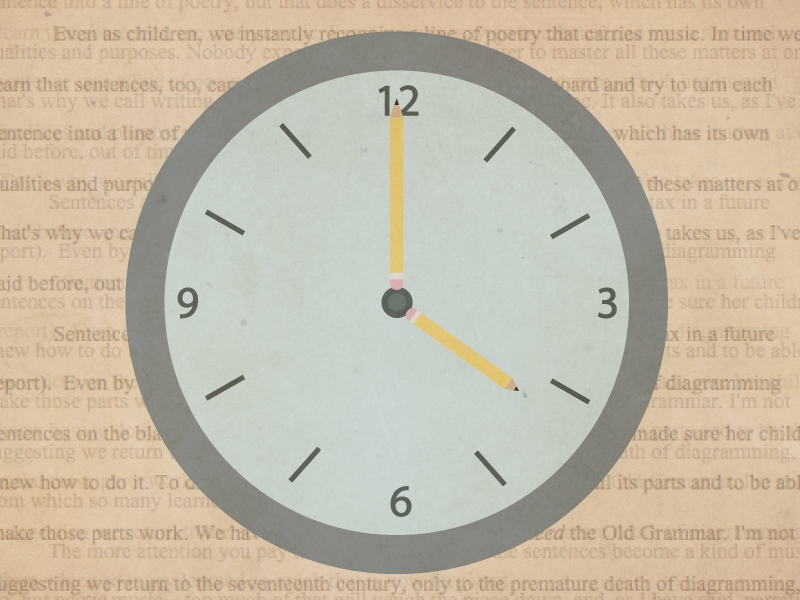 Sentences are built on phrase and diction and syntax (more about syntax in a future report). Even by the time I was born, schools had tossed aside the benefits of diagramming sentences on the blackboard. My mother, thank God, was great at that and made sure her children knew how to do it. To diagram a sentence is to become familiar with all its parts and to be able to make those parts work. We have the New Arithmetic, but we need the Old Grammar. I’m not suggesting we return to the 17th century, only to the premature death of diagramming, from which so many learned so much that is now forgotten.

The more attention you pay to sentences, the more the sentences become a kind of music. No, not poetic music — too much of that will weigh the piece down, and, as I have said, narrative must move — but a music that will accompany your sentence’s meaning. On the whole, you don’t need to worry about this. It happens on its own. And when it happens, you will be singing. A quiet song: something like humming, something like a hummingbird. Without operatic excess.

Sentences give rise to paragraphs. Paragraphs contain information, plans, digressions, arguments, questions, proposals, and propositions, and characters and descriptions and dialogue. I am not talking about theme paragraphs or outlining paragraphs. I am talking about the rich-smelling compost of fact, fiction, and sentence that grows and matures into narrative, into story.

Or into poetry. I once wrote a poem that turned into a story. Or maybe it was the other way around: story into poem. That was long ago, before I understood that the first few words will tell you where you are going. If there is meter, there probably is a poem. Alliteration (now ridiculously out of fashion in some writers’ minds, as if such a magnificent tool could ever be tossed out of the toolbox) may be the sign of a poem, though not necessarily. You will learn to trust your ear. Your ear will become more sophisticated than you thought it could. Your ear will save you from a lack of clarity, from being boring, from even that operatic excess I mentioned above. Trust your ear. It may lead you astray in the beginning — mine definitely led me astray in the beginning (too much bombast, too much grandiosity) — but your ear is learning, just as you are, and will hear the way before you do. 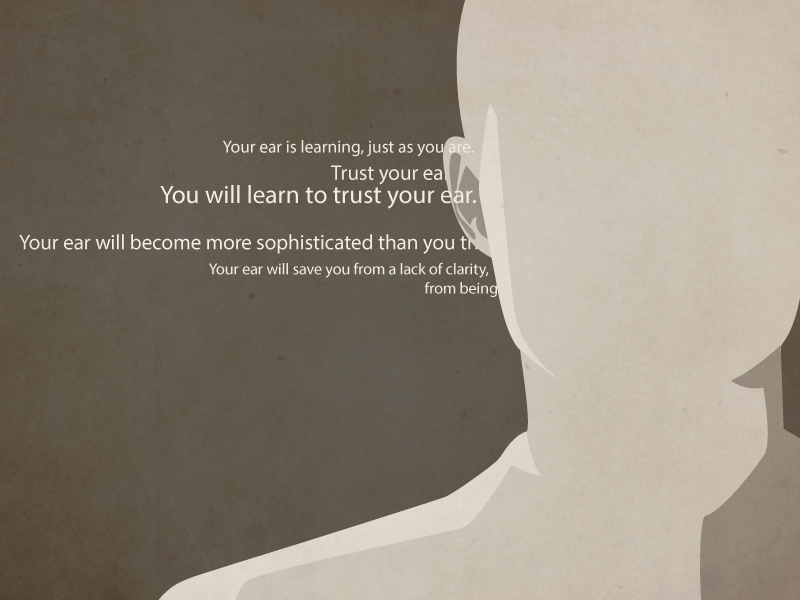 Structures do not exist in isolation any more than we do. They are always next to something — other structures, the desert, a busy city, a highway. They have a context. Your story or poem needs context too. Without context, what is in it cannot be foregrounded or backgrounded. Context provides measurement. It gives the reader something to hang onto. The reader is not simply flattened before the structure; the reader recognizes himself or herself in relation to the structure. The reader has a sense of where he or she is, where he or she might be going. Another way to put this is to say the reader has a sense of the world. It won’t be the entire world, but it will be wide enough and wise enough for the reader to stand in and on it. This is how a story or poem acquires a point of view. Point of view — first person, second person, third person, plural person — can get quite complicated. There are a number of excellent books about it. I favor Robie Macauley’s textbook Technique in Fiction (1964, revised in 1989) and co-authored with George Lanning. It would be useful to take a look at it. At the same time, if you just make sure you know where you are with respect to the story or poem, you should be okay.

There is a strange little book, well worth reading, that explores the mystery and foolishness and ingenuity of cities. It is Dreams and Stones, a novel by Magdalena Tulli, translated by Bill Johnston and available from Archipelago Books in Brooklyn. I am pretty sure it is the only book of its kind, though of course that is an unprovable statement. Written in Polish, it was first published in 1995 and reissued in 2004 and is now in paperback. Magdalena Tulli received the 1995 Polish Koscielski Foundation Prize for this work.

Dreams and Stones has no characters. There are items of clothing, tickets, streets, and trees. There are stars. There is no dialogue. And yet it shares something with Italo Calvino’s lovely Cosmicomics and Invisible Cities, Ben Marcus’s radical view of the family in The Age of Wire and String, and Alessandro Boffa’s hilarious You’re an Animal, Viskovitz! I note that other reviewers compare Tulli to Kafka and Bruno Schulz.

Without characters, we hear someone explaining to us how cities grow. Is this the voice of God? of the universe? of a single individual?

The first thing we learn is that the “tree of the world” is primary. There is also a countertree, which also seems to be primary. The countertree is “damp and dark” and grows into “the depths of earth, infested with vermin.” This comes early and may throw the reader off, but before long we encounter several examples of striking beauty. We are told the tree and countertree are one tree, though one is aboveground and the other is under. Whole cities “ripen on the tree.” Each city has the shape of an apple, which is not much of a surprise, but perhaps we like recognizing a familiar story in the midst of so much strangeness. I do. Each city can also claim a river. 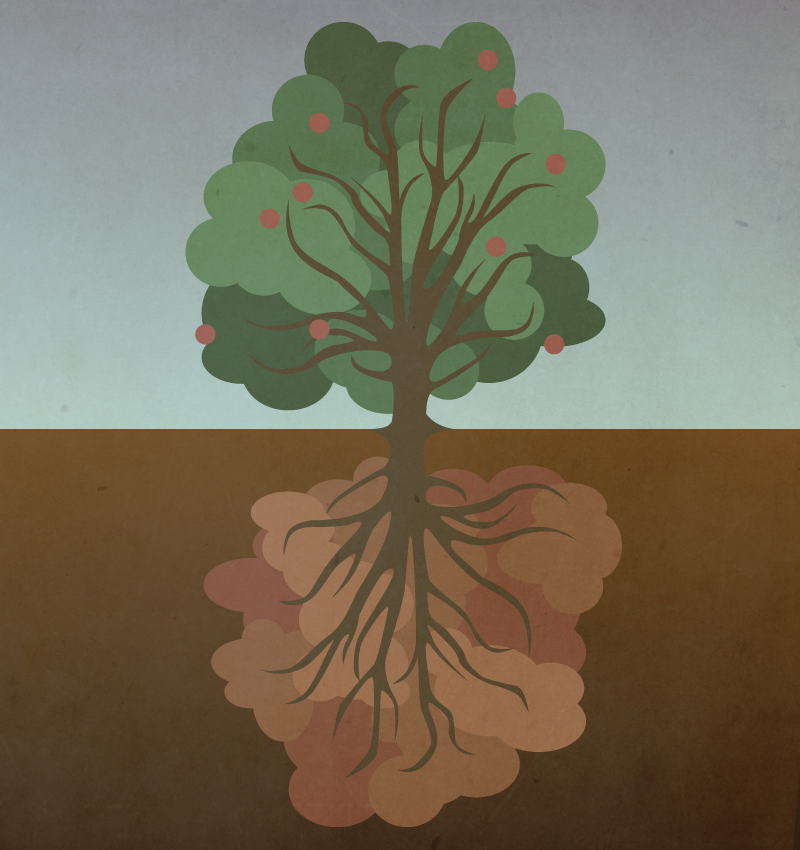 Someone has suggested that all the cities growing on trees may be Warsaw. Warsaw, which was beautiful, then torn, raped, and burned, and is beautiful again although much has been lost. As Tulli was Polish, it’s not out of the realm that she had Warsaw in mind. Or numerous Warsaws as it underwent change.

“The arrangement of the streets in turn was devised in such a way as to thwart chance occurrences and to avert convoluted thoughts.” What this means, I cannot grasp, and yet it is clear that the city and its population stand in relation to each other. One does not operate without the other. The city planners wanted a stalwart, uncomplicated construction and settled on a “guiding principle of the right angle.” Two other guiding principles were the meander and the “design of the star.” The star might be a Star of David, but Tulli doesn’t say that, so it may not be. Still, she informs us that “[st]ars. . . originate in the mind,” and given that we had thought they originated via gravity and heat and collision we may stop to consider the statement as metaphor or dream. Because, yes, much of this short book is very like a dream, and very like a star, and very like a tree, but most of all, it seems to me to be a lament for the past, although there are certainly sly observations and humorous moments.

The builders cut down trees successfully. Though it should be noted that during this operation life slips away from both parts. The same happens with anything else: After the visible part is separated from the invisible part, everything withers and shrivels up. Not everything, say some, and they also know a thing or two. But what survives will turn out to be part of a theatrical set or a dream.

Throughout this book, we find wonderfully wrought sentences that hint, tease, suggest, and almost close in on enlightenment. Some examples:

Where now can one can one find the certainty that the world is a machine   since in so many respects it resembles a tree?

It is hard to work when it is unclear which truth should be adhered to.

Every bricklayer, machinist or foundryman who entered the interior would             doff his herringbone cap and twist it in his hands, gazing about in admiration of the walls and ceilings, and would retire at once to the exit, having glanced by accident into a mirror in its gilt frame.

In the beginning the reserves of faith and strength seemed as inexhaustible as the deposits of coal.

At that time the machinery of the world worked smoothly. . .

Time was barely able to keep up with the rapidity of thought.

Thought was led by appearances and it was hard to recognize the thing that one’s eye lighted on. In this way all the worlds were mixed together. . .

No one knows where sorrow comes from in a city.

There are more such statements, each of them promising to lead us to clarity, but, as you see, we must make of this book our own clarity. Tulli does throw us a bone when she says, “life of today’s inhabitants is possible only in one single place in the world: the ephemeral city of today. . .” Here, I think, is where we can start to pull the pieces together.

Dreams and Stones works on us the way a dream or film might. I am taken with Tulli’s considerable intelligence. This book should be read slowly, word by word, with spaces in between. The spaces can be thoughts or naps. The reader may be surprised by the ending, which is subtle and provocative. And just how did so much structure distill itself into paleness and silence, unburdening itself? That is the magic of writing. •