When my twin daughters were infants, I would buckle them into their stroller and take long, meandering walks. As summer turned to fall and then winter, we visited bustling coffee shops, leafy avenues, and frozen waterfalls. When you are about to have a child (or children in my case), people who are trying to be helpful will say that it is going to change your life. That statement was always frustrating because of its perfect combination of obviousness and obliqueness. Of course, life was going to change dramatically, but how? I knew there was going to be more love, more fear of the future, and less sleep, but I hadn’t expected how much being a parent would bring up starker realizations and acknowledgment of how I myself was parented. As I walked, I thought about how I didn’t want my girls to feel abandoned or unwanted, how I wanted to actively nourish their humanness. On these walks, I was creating our own local patch, the physical and emotional space of their childhoods, imbued with old memories and newly-created ones. In both parenting and walking, I was practicing not knowing as a way of knowing, as a journey toward knowing.

These walks and many others happened in my often-frigid hometown in upstate New York. I have possibly-skewed ideas about what constitutes “appropriate walking weather” and am not deterred by icy sidewalks that need to be gingerly navigated bitterly cold wind, or the presence of damp rain-snow that seeps deep into your bones. I am like one of those large dogs who need to be heartily exercised or it will start gnawing the walls. Walking is the way I get most of my physical exercise, but perhaps more importantly, it is the way I work through things. While walking, I can access some of my deepest thinking and feeling; somehow the movement of my legs helps open the portal to understanding. As Rebecca Solnit describes in her brilliant history of walking, Wanderlust, “walking itself is the intentional act closest to the willed rhythms of the body, to breathing and the beating of the heart. It strikes a delicate balance between working and idling, being and doing. It is bodily labor that produces nothing but thoughts, experiences, arrivals.”

This working-through involves something more than just ordinary problem-solving, scheduling, and contemplation. In The Body Keeps the Score, Bessel van der Kolk describes some of the most important insights imparted by his mentor Elvin Semrod about trauma and the psyche: “The greatest sources of our suffering are the lies we tell ourselves, he’d say, urging us to be honest with ourselves about every facet of experience. He often said that people can never get better without knowing what they know and feeling what they feel.” Walking has helped me know what I know and feel what I feel. While walking, I have been able to deeply feel heartbreak and move toward acceptance, however slowly. While walking, I have been able to wrestle with the shame that I held onto for many years for staying in an emotionally abusive relationship in my late 20s and bearing cruel mistreatment for two years before I finally had the strength to leave. While walking, I have been able to feel all of the emotions associated with the loss of my father from suicide. For me, walking makes space for reflection, much like church or meditation does for others. 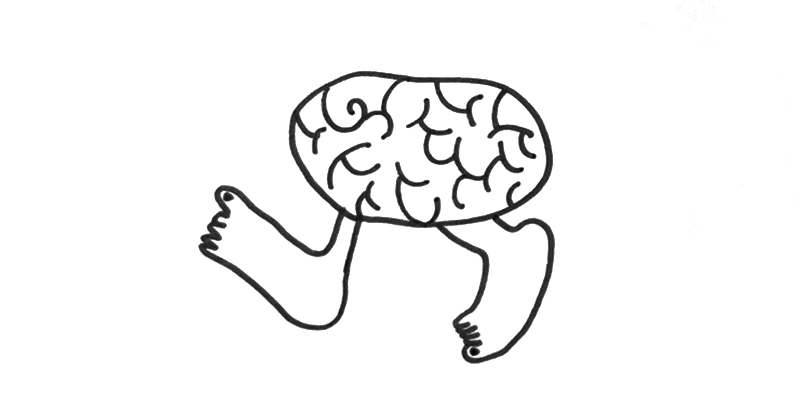 Most of The Body Keeps the Score focuses on the stories, treatments, and outcomes of the patients Bessel van der Kolk has seen over his many years as a preeminent trauma psychiatrist. However, one story that resonated deeply with me involved one of his family friends. He recounts the story of five-year-old Noam who, from his elementary school window, witnessed an airplane hit one of the World Trade Center towers on September 11, 2001. Noam and his father and brother ran to safety that morning. Van der Kolk visited with the family a couple of weeks later and Noam showed him a drawing he had made on September 12th — airplanes hitting burning buildings, people jumping out of windows. But he also drew a black circle at the bottom of the tower. He said that black circle was a trampoline “so that the next time when people have to jump they will be safe.” The boy and his family had walked away from the disaster; they were, as van der Kolk has put it, “agents in their own recovery.”

I also walked away from the disaster that day. With thousands of other people, two friends and I walked across the Manhattan Bridge in the smoke and ash, as F-16s flew overhead. I do most of my walking alone, but one of my companions that day, Kristen, is my number one walking partner. Over almost 20 years of friendship, we have walked hundreds of miles together, traversing Brooklyn, Manhattan, and later Ithaca. While typically a many-mile walk was part of our routine, after walking home to Brooklyn from midtown on that particular day, we were both physically and emotionally spent. Like many other people in the world, we were glued to the television that evening, watching the endless loop of the planes hitting the towers and their eventual collapse, the latter of which I had witnessed with my own eyes from my office building on 39th street merely hours before. Exhausted but wired, sleep didn’t come until very late that evening. But I knew that I was home and safe, and all of my friends were, too.

I still remember the burning smell that lingered in the air for weeks, matching anxious electricity that simmered just beneath the surface of everyday interactions. About one month after the attack, two friends and I were eating lunch in a taqueria when Freddie Mercury’s voice came through the speakers: Mama, ooo, I don’t want to die. At first, we all joked that we didn’t want to die either and started to laugh, but within moments we were all crying. It took a long time before I wasn’t nervous when there were long delays on the subways, particularly when we were stuck on the Manhattan Bridge. The mood of the car always shifted — people were noticeably tense as the minutes of standstill ticked by. Hushed conversations and empathetic glances between strangers. Why aren’t we moving? Breathe. We are all going to be ok. The train would move again, people would soften, and eventually, I’d walk up the stairs of the subway into the light, fear receding into the background. As time went on, I realized that an hour had passed when I wasn’t thinking about the tragedy, then days, then weeks. The city and I had begun to heal; we were actively moving forward.

It isn’t only a personal thing, this interest in the relationship between walking and working through trauma. I am a health economist whose research has focused on disability policy, specifically, veterans with post-traumatic stress disorder. PTSD arises from a traumatic event or series of events, but everyone who has experienced great trauma does not go on to develop PTSD. Why is this the case? In “Understanding PTSD and PTSD Treatment,” the Veterans Administration outlines the symptoms — flashbacks and reliving the traumatic event, avoiding things that remind you of the event, increased negative thoughts and feelings, and feelings of hyperarousal and hypervigilance. Research shows that people can’t effectively function in the presence of constant terror, sadness, or anxiety. Grieving is not linear and is never truly “over,” but the typical grief and healing process does not retain the intense, overwhelming nature of the first months. As Bessel van der Kolk states, “Trauma is not just an event that took place sometime in the past; it is also the imprint left by that experience on mind, brain, and body . . . trauma results in a fundamental reorganization of the way mind and brain manage perceptions . . . For real change to take place, the body needs to learn that the danger has passed and to live in the reality of the present.” The workings of the brain and the interaction between the brain and the rest of the body are still largely unknown and these facts make PTSD notoriously hard to treat.

One promising treatment for people with PTSD is a technique called eye movement desensitization and reprocessing (EMDR). EMDR was created in 1987 by the psychologist Francine Shapiro. Practitioners of EMDR use eye movements, taps, or tones to create bilateral stimulation of the brain while the client focuses on a particular traumatic memory, sensation, or image. The therapist simply moves her hand slowly back and forth across the client’s field of vision and asks him to track the movements with his eyes. After the cycle of stimulation ends, the therapist instructs the client to pay attention to whatever thoughts, feelings, memories, and associations emerge. Somehow the bilateral stimulation gives people access to “loosely associated memories” and helps reframe and recontexualize them.

Shapiro published the first of many controlled studies investigating the effectiveness of EMDR in 1989. She studied 22 subjects who were suffering from trauma and experiencing “intrusive thoughts, flashbacks, sleep disturbances, low self-esteem, and relationship problems,” which she described as the “presenting complaints.” She analyzed three different variables — anxiety level, the validity of a positive statement of the traumatic incident, and these complaints. She measured these variables at three different moments before she implemented EMDR therapy, and at 1-month and 3-month follow-ups. A single session had dramatic positive results on all three variables. Larger scale studies soon followed, confirming these results. EMDR is strikingly effective when dealing with one-time adult-onset trauma, and might need more treatment time or may not be as effective for people who experienced trauma as children or those who have endured multiple traumas. In 2013, the World Health Organization recognized the effectiveness of this treatment, suggesting that EMDR be used instead of anti-anxiety drugs for those suffering from PTSD.

The mechanisms of EMDR are not fully known but walking may create similar physiological effects. In fact, the act of walking led to the birth of EMDR. Shapiro was walking in a park when she realized that her eye movements were minimizing her own negative thoughts and feelings related to difficult memories. That experience led her to the laboratory to create and investigate the effectiveness of this psychotherapy technique. In Wanderlust, Rebecca Solnit thinks about the walking-brain-body connection more generally, musing, “it is the movement, as well as the sights going by that, seem to make things happen in the mind, and this is what makes walking ambiguous and endlessly fertile: it is both means and end, travel and destination.”

Growing up in the 1980s in a progressive household headed by lesbian feminists meant that I was as familiar with Ram Dass as Judy Blume. Spiritual teacher and psychologist Ram Dass became well-known to a certain type of American with 1971s Be Here Now. The phrase of his that is most important to me is “We’re all just walking each other home.” I love the acknowledgment of the importance of active caring and intentional community embedded in that statement, but I also appreciate that the act of walking is inextricably linked to the act of care. I am grateful to be able to walk and to marvel at its transformative powers. Along with talk therapy and connection with loved ones, walking is the main way that I navigate my emotional landscape. Maybe I’ll try EMDR in the future. But now and always, walking replenishes me. It calms me, focuses my thoughts, and helps me feel my feelings. It helps me get home. •