For as long as I can remember, I’ve been fascinated by skyscrapers. A poster with the skyline of Manhattan graced the wall of my childhood bedroom. And I belong to the slowly disappearing group of people who have gazed upon New York not only from the Empire State Building and the Rockefeller Center, but from the viewing platform of the vanished World Trade Center too.

Now a spectacular new project is underway in Switzerland that immediately drew my attention: a skyscraper in the middle of the mountains. The location is the village of Vals, in the canton of Graubünden. Even in multilingual Switzerland, Graubünden is remarkable: with native speakers of Swiss German, Italian, and Romansh, it is the country’s only trilingual canton. This spot in a beautiful arm of the Anterior Rhine valley is home to about 1,000 people. Approximately the same number of sheep are said to live there as well, but perhaps that’s just a rumor. The planned building will be 80 stories tall and soar 1,250 feet into the sky. That’s 23 feet higher than the Federation Tower in Moscow – which currently qualifies as Europe’s tallest building – and exactly as tall as the Empire State Building minus the antenna. However, a building now planned for St. Petersburg will come in at over 1,312 feet, reclaiming the top spot for Russia. Of course, all these structures are small potatoes compared to the world’s tallest building, which boasts 2,722 feet and is located in Dubai.

The Vals tower was designed by Thom Mayne, the principal architect of Morphosis. Mayne co-founded the firm in Los Angeles in 1972. He has taught at various Ivy League universities and at UCLA, and won the Pritzker Prize for architecture in 2005. Morphosis beat out seven other competitors for the Vals project.

As planned, “7132” – named for the town’s postal code – will be an unusually slender structure. Measuring just 101 feet long and 59 meters wide, it will stretch into the heavens like a transparent needle. A rendering of the finished building depicts a delicate, ethereal tower so barely visible against the sky that it almost appears to merge with the clouds. It’s likely that the style of illustration was chosen to make the building appear less dramatic than it will actually be in real life. In any case, it’s clear that the reflective, ultra-skinny tower will pose a real challenge for birds.

“7132” will house a hotel and about 100 luxury apartments that will command dizzying prices. Word has it that a double room will cost at least 590 Swiss francs (or $617). Some accommodations will stretch over the entire floor, providing guests with a 360-degree view. There will be a spa, gym, ballroom, library and gallery. The experience is meant to evoke the glory days of early Swiss tourism, with the legendary Badrutt’s Palace Hotel in St. Moritz. The tower will be the tallest hotel in the world – beating out the current record holder, the JW Marriott Marquis Hotel in Dubai, by 85 feet. And it is supposed to be one of the world’s five best hotels as well. 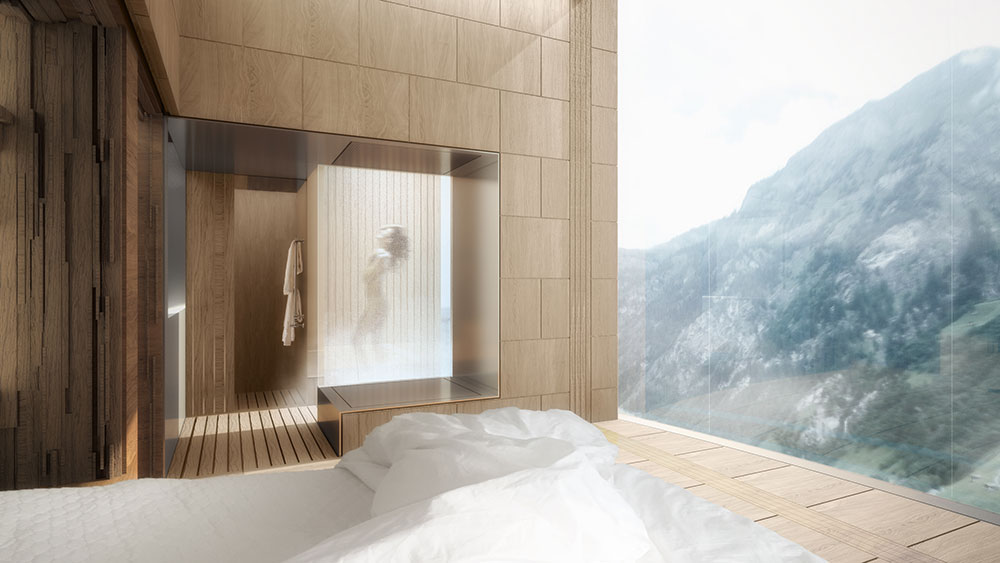 Remo Stoffel, a real estate developer who grew up in Vals, seems to have been waiting for a challenge like this. He caught the big-building bug in Dubai, where he offers his services. When confronted with misgivings about the project, he replies that the height of the building is nothing compared to the surrounding mountains. He’s right about that, at least. The peak known as Zervreilahorn – a tongue-twister even for a native German speaker like me – is 9,500 feet high.

The list of superlatives is long: thanks to its location and dimensions, the building surpasses anything ever built in this super-rich Alpine playground. It’s also an alien body in a village that is (justifiably) proud of its centuries-old building tradition – the compact houses of massive stone look as though they could stand forever. They are literally “down to earth” and could survive for millennia after newer architectonic experiments like the tower are long gone.

Remember Rem Koolhaas, the architectural provocateur par excellence? In his seminal book Delirious New York, he identifies the skyscraper as an “architectural mutation,” describing it as a building in which “the elevator has been the great emancipator of all horizontal surfaces above the ground floor.” Manhattan, in turn, is an example of “shameless architecture”; after all, it was in New York, the quintessential skyscraper city, where “the determination was strongest to remove the territory as far from the natural as humanly possible.” 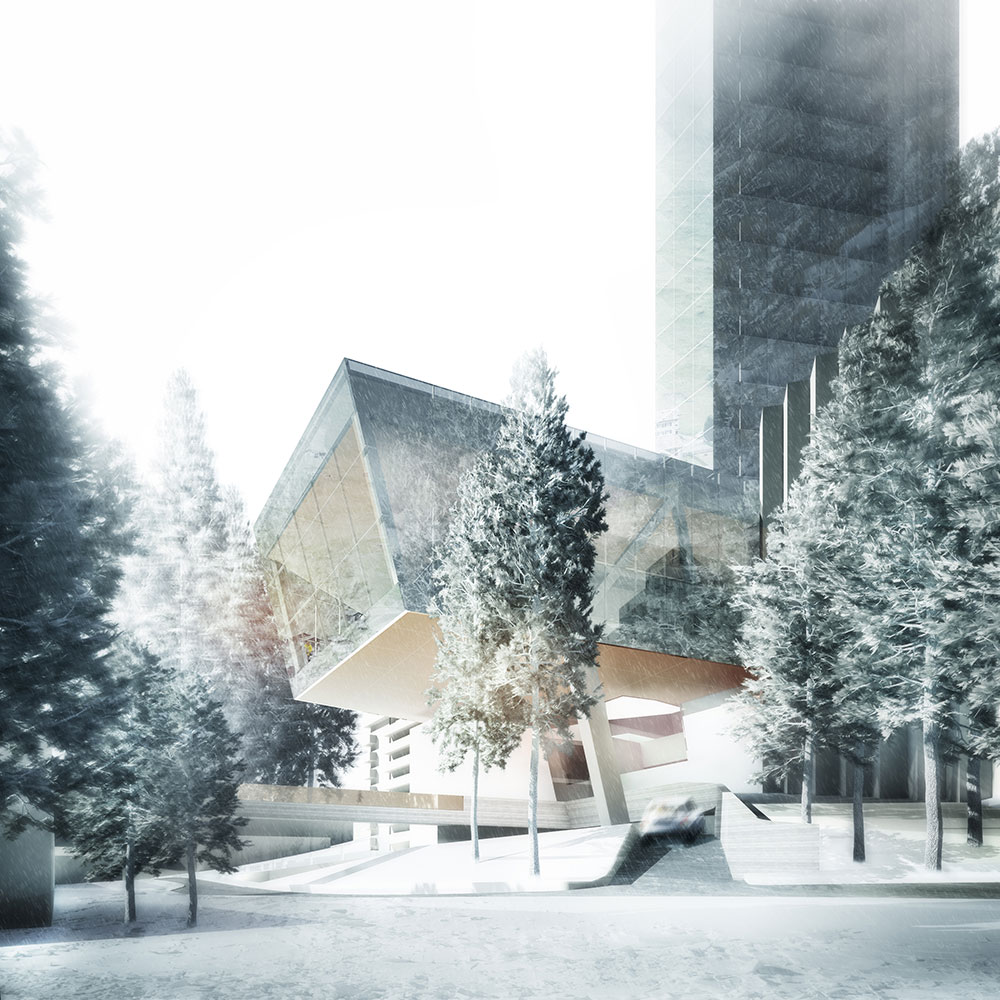 How does a building “successfully” harmonize with mountain scenery? What aesthetic justification exists for building a skyscraper in this remote spot? And will the digital rendering of the skyscraper match the real one? There’s plenty of room at the site, yet “7132” represents an effort to pack the greatest possible amount of space into the smallest possible footprint – smack in the middle of breathtaking Alpine countryside. Is there really a need to accommodate people in such a small space? Maybe the structure is simply out of place here?

The tower would clearly dominate the landscape and cause the village to seem even smaller than it already is. No matter where you might go in the area, the tower would always be present – its relentless shadow pursuing the valley’s inhabitants like the implacable hands of a solar-powered clock. And I somehow doubt that the view from inside would really unprecedented. There’s nothing to see but the countryside and the mountains, and those surrounding mountains offer a far better vantage point for taking in the spectacular surroundings. What makes standing atop the Empire State Building so fascinating is the panoramic cityscape with many other skyscrapers jutting from the depths below. It enables us to transform our perception of the city. But the Vals tower would stand alone and King Kong would feel lost there. In any case, first a lot of work will have to be done. The construction of the tower in the valley certainly presents some formidable challenges for logistics.

The architect promises “a powerful aesthetic experience”: “The tower’s reflective skin and slender profile camouflage with the landscape, abstracting and displacing the valley and sky. … Moving through the three main building components – podium, cantilever, and tower – a narrative emerges of landscape and structure, density and lightness, weight and levity, opening and enclosure. Lifting guest rooms high above the Valser Valley, the hotel tower becomes a minimalist object connecting guests to nature.” It all sounds great – but can you really connect with nature if you are taking the elevator to get as far from it as possible?

It’s not an accident that Vals was chosen as the site: the village is a magnet for architecture fans. Almost 20 years ago, the Therme Vals opened its doors on a spot next to the planned skyscraper. This spa, designed by Swiss architect Peter Zumthor and beautifully constructed from slabs of stacked quartzite, embodies a design principle diametrically opposed to that of the tower: it blends into the landscape. The spa building is set into the mountainside and linked to a hotel complex by an underground passageway. In 1998, Janet Jackson used Therme Vals as the setting for her music video “Every Time.” Curiously, Zumthor has avoided commenting on the planned addition to the neighborhood. Other changes are in the works, too. In two years, the Valser Path, a park is expected to open. Its designer, Japanese architect Tadao Ando, says “I believe it will harmonize in the beautiful landscape and will attract and impress various guests and visitors from all over the world.”

Vals draws an urbane crowd that is ready to pay 80 francs (about 83 dollars) for a spa visit. Mass tourism is not the point. And traditional hikers outfitted with walking sticks, lederhosen, and a yodel repertoire are nowhere to be seen.

The tower isn’t standing yet. At this point, it’s little more than idea – but this idea has made waves and prompted an immense range of responses and emotions. For some people, the project is innovative; for others, it’s simply absurd. Now and then you even hear protests against the “rape” of the town. Vittorio Lampugnani, a renowned architecture professor at ETH in Zurich, declared that “skyscrapers in the Alps are an absurdity.” An architecture critic for the Guardian equated the tower with “a gigantic mirror-clad middle finger aimed at the region“ and claimed, “It’s hard to imagine a more obnoxious gesture to inflict on a sleepy spa town.” Not surprisingly, architect Thom Mayne sounds much more optimistic. He has no doubt that the tower will blend in effortlessly with its rural setting: “As much as possible, the hotel is a minimalist act that reiterates the site and offers to the viewer a mirrored, refracted perspective of the landscape.”

The decision to award the contract to Morphosis is also a cause of controversy. And there’s still a large hurdle to clear, thanks to Switzerland’s system of direct democracy. Since the plan will have “considerable impact on the space and environment” it requires zoning changes that first the voters of Vals and then Graubünden’s canton government must approve. We don’t want to get lost in the fine points of Swiss politics, but the Federal Council could even end up deciding the tower’s fate. The question of where the 400 million francs will come from isn’t completely answered, either. But even if political resistance or planning rules spell the end of the project, the village of Vals will surely emerge a bit better known. (After all, even this little article has played a role in spreading the word about this phallic monument to Swiss capitalism).

I wish it were possible to ask Thomas Mann – who so memorably described a sanatorium hotel high in the Swiss mountains – what he thought of the proposed design. For all its amenities, 7132 won’t even have a balcony where guests can lie in the fresh air to recover from their lung ailments. •