The Girl From Krakow is Rita Feuerstahl, a Jew who speaks both Polish and German. She is twenty, tall, blond, and blue-eyed — “almost beautiful,” in our author’s words — and very smart. She wraps herself in a trench coat. Because she is Jewish and there are quotas for Jews, she audits some classes offered by the law faculty, but she finds she prefers hanging out in the philosophy library, making her a girl after my own heart. In one of her law classes she meets a young doctor named Urs Guildenstern and marries him. He is cautious and methodical, perhaps because caution and routine allay his anxiety. Rita is not in love with him, but is pleased to acquire some creature comforts from the marriage.

Then she meets another doctor, this one named Tadeusz, and does not hesitate to sleep with him.

Tadeusz’s backstory includes working in Spain as an Ob/Gyn. In the process, his name is changed to “Guillermo Romero.” (Names and citizenship change fairly often in this book, which is fair enough considering that the Nazis were drawing up list after list.) When the NKVD (The People’s Commissariat for Internal Affairs, a law enforcement agency associated with Soviet espionage) come looking for him, he heads back to Poland, to Lvov, where Spanish doctors are very welcome. At the same time, Rita’s marriage to Urs is falling apart. Referred by him to a fertility specialist, she discovers herself once again facing Gil (Guilermo), and again they engage in sex. Urs learns that his suppositions about their relationship are accurate, and after he makes a suicide attempt, Rita agrees to renounce Gil. 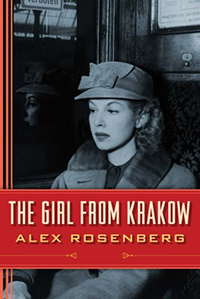 The Girl From Krakow by Alex Rosenberg

Near the end of 1939 Rita finds she is pregnant — by Urs. She will send the boy, Stephan, off with a woman in the Home Army, and spend much of the war looking for him. Urs is drafted. Rita is quick to realize what necessities she must stock for the war. She is glad that she won’t need to feed Urs.

She takes in a boarder, a homosexual Jew, who is also an enlivening character. He is Erich Klein, and he becomes close to Rita and Stephan. Klein turns out to be knowledgeable about Gödel’s Proof, which established that no system can be completely closed. Klein concludes that mathematics is therefore a game and that he himself is an atheist. I have read Gödel’s Proof but I do not know if these conclusions are irrefutable. The makeshift family gathers in another character, one who has based his life on what he has learned from reading Darwin. Rita is drawn to what she learns about Darwin and eventually translates his “blind variation” into a philosophy that offers her a measure of freedom, at least mental freedom.

Why was she alive? Intelligence, foresight, the right decisions? How foolish to think that. Better to ask why thought always seeks stories, meaning. Why do we endlessly try to make sense of things? Why are we never satisfied with the right answer — dumb luck? Why do we always crave a motive? And why did rail journeys always provoke interior monologues of philosophy?

It is Rita’s thoughts that make the book worth reading. The story takes us on a journey through Poland, Ukraine, southern Germany, and Spain and adheres closely to the timetable of events in World War II, but it is Rita’s attempt to justify the ways of men (i.e. humanity) that brings the book intellectually alive. In the process of doing so, God is, shall we say, excommunicated. If everything we do is done blindly, there is a reasonable chance that some of us will survive, at least for a while. Rita’s philosophy, while not entirely optimistic, serves her well. The narrative of her journey through war grips the reader. “Meaning, purpose,” she tells a close friend, a refugee:

[T]hat’s just wishful thinking. Something we can’t afford. We can’t waste time wondering what this war means in human history. Human history doesn’t mean anything. The war is just a catastrophe no different from a new ice age, only happening much faster, more like the Black Death.

I’m inclined to think only someone who can look at WWII from a distance could accept Rita’s interpretation of war, but the author convinces us that Rita survives precisely because she can make that imaginative leap.

This is a hard book to put down; I was continuously fascinated, thanks to the author’s narrative ability. But I do wonder at the title, which sounds like chick lit. The author is a male professor at Duke University; did his publisher come up with the title? Also, there are about a half-dozen graphic sex scenes. I know perfectly well that people have sex in wartime, and yet it is jarring to encounter such scenes. They seem discordant, as if the book has traduced its tessitura, its natural pitch. Nevertheless, The Girl From Krakow is lively, interesting, informative, and often moving and I am happy to recommend it to readers. •