It is not difficult to imagine Sherlock Holmes, that great eschewer of the supernatural, firing his clay pipe into the fireplace at 221B were he made aware of the cottage literary movement birthed by his adventures. People tend to forget that the detective and his dogged, Boswellian biographer Doctor Watson, investigated through the first quarter of the 20th century, existing as surely in the age of Babe Ruth as they had in the Victorian era of Wilkie Collins. There were, of course, hundreds of Holmes knock-offs and pastiches throughout the detective’s run, as there are now, but what some writers, at least, had the good sense to realize was that simply recasting the model of the genius deducer and his very human foil/partner was not going to achieve any more than serve up some Sherlock-lite. A new wrinkle was needed. Enter, then, the ghosts, and the duos who investigate them.

In the summer of 1914, when the wife and husband duo of Alice and Claude Askew published the eight stories that comprise the collected adventures of Aylmer Vance, “ghost-seer” — there’s something for a business card for you — supernatural fiction was going through a crucial change. The ghost story, long dominant in England, from where the Askews hailed, and which made up a goodly chunk of the best literature yet written in the States, had started to morph into the weird tale, the stuff that would dominate the pulps in the 1930s and 1940s, giving rise to those limited edition book runs at places like Arkham House, which recast horror writing much as Hawthorne, Poe, and M.R. James once had. Humans, now, were often the agencies of the macabre, or else elemental forces from the beyond divorced of human form, but borne of human crisis and strain. The dead girl in the glowing white dress, less so.

The Askews, in the Vance stories, took up a sort of dual residence in these two worlds. Women had always written ghost stories — in fact, more women may have written them in the Victorian era than men — but married couples had never really composed works together in the history of supernatural fiction. And boy how the Askews wrote: they banged out more than ninety novels, while also working in Serbia for the Red Cross’s relief efforts during WWI. They died at sea, in 1917, when a German submarine torpedoed their ship. Claude was 51, Alice 43.

William Hope Hodgson, with his Carnacki the Ghost-Finder series, and Algernon Blackwood — who looked like a terrifyingly wizened ghost himself — with his John Silence stories, are arguably the authors best known for this idea of taking a Holmes and Watson-type duo and turning them loose on spooks, but no one quite nailed a balance between lead investigator, respected best friend, and otherworldly doings, like the Askews.

Aylmer Vance, as his name suggests — for this wasn’t a guy coming around to clean your chimney — is a dilettante and voyeur in the sense that he is so well-heeled that what he most enjoys doing is doing nothing at all and observing the world around him. He is a member of the Ghost Circle, an organization that the Askews casually reference several times, but which is never explained in the stories. It’s a bit of biographical trivia, though, that impresses our narrator Dexter, who spends a lot of time, when he is not working as a barrister, turning up at various country inns in vaguely stalkerish-style, hoping to run into Vance, and, in essence, courting him in a manner such that you’re not at all surprised that it was a wife and husband team bringing these two humans together.

That Dexter is a lawyer is crucial, because, as Vance says in the earliest story, “The Invader,” a man of the law offers solid pragmatism. So: if Dexter is buying into the ghost stuff, the ghost stuff is legit, dear reader. The homosexual element between the two is either deliberate, or else just the natural writerly runoff of two people who love each other pairing up to write together. Either way, it adds a sad, unrequited wistful tone to the stories, a bittersweet feeling of something that cannot be consummated, and which plays nicely against the longings evinced by the many ghosts we find here, a number of whom are kind, sweetly judicious, and even collegial. 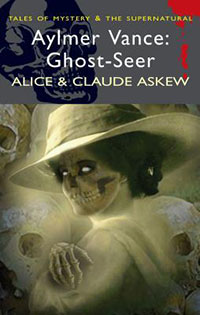 We’re not three paragraphs into “The Invader” — where the ghost does not fit that above friendly bill — when Vance, out in a garden with the newly arrived Dexter, queries “Does the moonlight ever affect you? Does a night fill you with vague longings? Do you learn to discover the secret of the universe — to know more than is good for man to know — perhaps to peer into the future?”

And there is our entire template. To paraphrase: Isn’t this romantic, aren’t I somewhat romantic, there is but one secret to the universe and ghosts are a part of it, we may get into trouble here with the things were toying around with, and, lastly, it probably wouldn’t hurt if one or both of us is clairvoyant. You in, Dexter?

Dexter is in. He is also, as we learn with the fourth story, “The Fire Unquenchable,” the clairvoyant member of the team. In “The Invader,” dominant traits are established, which carry on through the seven other tales. Dexter both fawns before Vance and betrays those feelings with certain opinions, even offering conclusions that cast his buddy as not the healthiest of fellows — he believes, in this instance, that Vance fell in love with the demon-possessed dead wife of his friend — whereas Vance is essentially the ghost hunting king of passivity. He rarely intercedes, caught up, instead, in his own curiosity, like he’s some David Attenborough-type who maybe would like to see the gazelle escape the lion, but it’d be wrong to interfere, as that is not the natural course of events. One could argue that ghosts are not the natural course of events, either, but to Vance, they’re at least as much a part of such matters as the living. Their souls simply having different post codes.

Nature is a key in these stories, and it’s no coincidence that events tend to happen far from cities, where the spirit world and a kind of primordial pantheism comingle. Ghosts exists out of time, people are subject to time, and if the ghosts have their limitations — an inability to impose their will, as freely as they’d like, say — then the living beings here have as many on their end. We see those dueling inabilities made manifest in “Lady Green-Sleeves,” a charming tale of a dead girl who returns to her home, where a ball is being given.

“Do you learn to discover the secret of the universe — to know more than is good for man to know — perhaps to peer into the future?”

Vance, one of those confirmed English bachelors more invested in trout fishing and puttering around in his Rolls and his gentleman’s clubs than in marriage and family, nonetheless has no problem falling in love with a ghost, as he does here. She takes pity on him — lets him down easy, as it were — but what adds special resonance to the story is that others observe this ghost, too, out in the open, under bright lights, passing about amongst the living, and this is one of those instances where we can chart that shift in the supernatural canon from the traditional ghost story to the weird tale, which is to say, to something intrinsically human in that the ghost is now every bit in us, as outside of us. We are the haunters, even the despoilers, of ourselves, and the shadow on the wall is as much a projection, a manifestation, of that which vitiates our soul, as anything.

In “The Stranger,” Vance is a mostly inept godfather who basically gives his goddaughter away to a haunt, her life expiring in the process, but he’s not particularly troubled by this, viewing it as a fitting union. For Vance, the absence of the proof of sorrow or pain generally means there must be no sorrow or pain. Dexter, meanwhile, is clearly trying to process such an ostensibly glib take, but Vance is more chronicler than reasoner. He observes, we observe, conclude as you will.

Dexter is an intellectual equal, and, on the whole, less dangerous in that he’s more proactive, less in thrall to looking in on other worlds. In “The Fire Unquenchable,” a deliciously clever twist on the ghost story in that the “ghost” is creative energy and genius, it is discovered that Dexter possesses mediumistic gifts, which Vance decides is damn handy — more peeping in!

What’s interesting, here, though, is that as desirous as the ghosts are for belonging, to square halved squares, so too our everyman representative in Dexter yearns for the same thing. Having discovered this gift of his, he make some remarks about possessing plenty of means — sounding like Vance — and declares that he now has a “fresh occupation,” which boils down to “From that day forth I was a disciple of Alymer Vance.”

The man simply wants a purpose, and accordance, beyond what he views himself to possess presently. And it is that notion of longing, more than any other, which marks the best ghost stories. Here, a nascent ghost is lodging itself in Dexter, and this is the human ghost. You like Dexter, but you realize that one who moves to the Vance side of the ledger, with such fervor, isn’t someone in the fast lane for the well-lived life. But he could well be at the core of some top terror tales.

And Dexter is at that, starting with “The Vampire,” the mostly commonly reprinted Askew story. The victim is a man, which is a nice twist in these things, and this is one tale where Vance and Dexter do intercede, with the former hitting upon the solution of razing a castle. This is a preferred Vance method, actually, when he does choose to act: Knock the sucker to the ground, and the dark meanies won’t have a place to stay, in effect.

But most of the time a dose of brandy is recommended instead, and then what comes, comes, and if it can be dealt with, it can be dealt with afterwards, a case less of psychical problems and more of controlling what one can control. And while that might not get you very far with a succubus or a vampire, it’s decent advice, courtesy of the Askews, when it comes to existence, be you a person, a ghost, or both. •